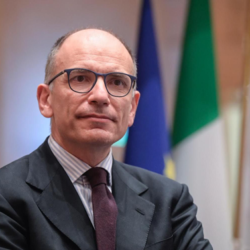 by Enrico Letta
Secretary of the Italian Democratic Party (PD)

Ukraine has filed its application to join the EU. Brussels and the other European capitals have encouraged its ambition eagerly. Recently, Italian leading newspaper Corriere della Sera featured an interview by Prime Minister Mario Draghi recalling the significance of the self-determination of the Ukrainian people. People who chose the ‘ultimate’ referendum – between life and death – not to succumb to Russian invasion while willing to be part of a united Europe.

I agree with PM Draghi’s words. The primary goal is peace, with real negotiations, leading to end the hostilities. Leaving the door open for Ukraine and other Eastern countries with the same ambition for freedom and democracy is the right thing to do. Downplaying the complexity of this process is wrong however.

EU accession is far from easy. There are many backlogs in order to meet the required standards.  Furthermore, a new enlargement could have an impact on the EU and its institutions that is difficult to be assessed as we write.

After ’89, things proceeded without a clear steer. First, it was time for great promises and expectations; years and years of let-downs have then followed; finally, a phase of full-throttle acceleration. The result? Resentment in some – the newcomers – and mistrust in others – the old members. The subsequent events in Hungary, Poland and the Visegrád group have proved it.

Hence, my appeal to all of us is: avoid making the same mistakes. We should immediately create a European Confederation, consisting of the 27 EU member states, plus Ukraine, Georgia and Moldova, Albania, Bosnia and Herzegovina, Kosovo, Montenegro, North Macedonia, and Serbia. This would have a twofold result. On the one hand, Ukraine, and the other countries lining-up to join the EU, could participate in the European public life and have their say in a common political platform and share the same strategic space. At the same time, the path to EU membership would continue unchanged in parallel, with appropriate timing.

The most tangible display of this model would be the meetings of the European Councils, which should be immediately followed by the Summit of the Confederation’s leaders – in the same place and embodying great symbolic force.

In the past, the choices that were made have overcomplicated things. Back then, the Central and Eastern European countries vocally expressed their willingness to be part of the European Community, later the European Union. The response was prompt and affirmative, as it has been the case today for Ukraine. It was the force of History, leading towards openness. However, the idealistic charge made us lose sight of the practical implications. The process proceeded amidst great rhetorical commitments and a plan of individual paths and bilateral relations, without assessing possible implications.

The operation did not go as smooth as expected. The complexity of an operation that doubled the number of member states and transformed the Union’s features emerged quite immediately. In the course of this tortuous path, it was not possible, for example, to reform the decision-making process, nor abolish the veto power that exists in too many areas.

It took decades to complete the enlargement. Public opinion became hostile to it. It was thanks to the Romano Prodi Commission’s resolution that the process was completed.

The choice was appropriate: last weeks’ events – as well as the History of nations that have always been exposed to attempts of being subjugated or dominated – confirm how important it was to succeed in that enlargement. Nevertheless, we had rather avoided focusing only on the quickest entry to the EU; our focus should have been also on building a more ambitious architecture from the outset. All these actions were supposed to make two complementary needs coexistent: instant political sharing and progressive adaptation to the policies.

The European Confederation would be the place for political dialogue between the 36 participants. Common choices would be agreed upon together. The ability to define shared global strategies would be refined, starting with the defence of peace, security, the promotion of a fair and sustainable development model and the fight against climate change. The Confederation would give strength, including symbolic strength, to the unity of the Continent.

The Confederation would be an immediate response to millions of people looking at the EU with hope that we are all in the same ‘European family’. At the same time, this idea should go hand in hand with deeper integration within the EU, abolishing the veto power in those strategic areas still functioning in an intergovernmental way. The Confederation then is a new way to address the widening of the Union, while still pushing for its deepening towards a federal architecture.

For Europe this is the time of when in trouble go big. The convulsions of these dramatic days shouldn’t blind us to the big picture, nor lose clarity in predicting the future consequences of the choices we make today. 24 February 2022 – the day when Putin’s invasion attempted to take us all back to the worst period of the Twentieth century – is a watershed marking an epoch-making transition.

Tomorrow’s Europe will be different, no matter what. That is why it is vital to lead the change and not to be driven by events, starting with the determination to turn the European Union into a pacific area that is building peace.

Europe is our home: it is so attractive that millions and millions of foreign citizens wish to join it. It is something so precious that its reformation and consolidation become historic duty – perhaps the most challenging ever faced by our generations.

This article was originally published in the Corriere della Sera.