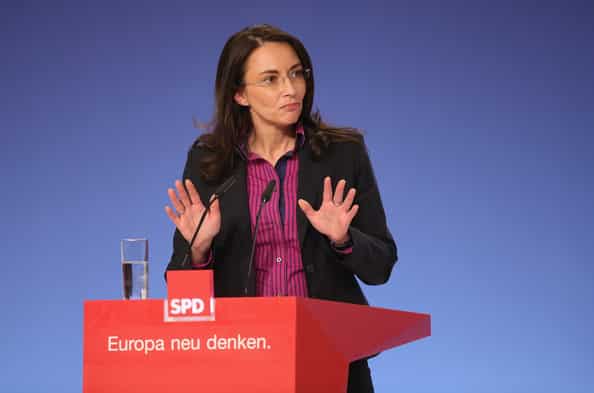 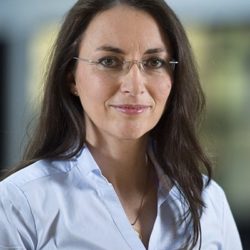 The new General Secretary of Germany’s Social Democratic Party (SPD) is keenly committed to issues related to the job market. Among other things, she advocates stronger codetermination and a new social contract to balance work and free time.

She could talk to you for hours about working conditions and ways of improving them. As General Secretary of Germany’s Social Democratic Party (SPD), Yasmin Fahimi is of course tasked with defending her party’s ideas and programme, as well as promoting SPD policy in government as part of the grand coalition between the CDU/CSU and SPD. Yet job security and the ability to find work are far more than just another topic on the table for this 46-year-old woman with a wise demeanour: it is an issue to which Yasmin Fahimi has been committed for over a decade. Her typically restrained, modest mode of expression grows more intense and at times touches on the idealistic when talk turns to such topics: “Economic conditions and the labour market have changed significantly. Improving job security and access to work is an ongoing, core concern,” she insists. She repeatedly calls for the need to “organise the world of work to allow people to follow their dreams.” Although she applauds Germany’s decision to introduce a minimum wage in 2015 (which she describes as a principle that must never again be called into question), Ms Fahimi believes that it is “above all necessary to remedy the situation and that there is a need for a truly preventive policy on employment.”

About ten years ago, while she was working in Recklinghausen, in Germany’s Ruhr region, for the IG BCE, the country’s number-three trade union (representing the chemical, mining and energy industries), she came to realise something: “We did not have the answers to the problems encountered in companies, such as extreme psychological strain, difficulties in working up to retirement age and the increasing rate of burnout.” With her IG BCE colleagues, she undertook an in-depth analysis of these trends. That led to the “good work” campaign, designed to humanise and modernise the business world. The initiative was adopted by all other German unions and gave rise to an annual report published every year since 2007 on changes in working conditions.

However, Yasmin Fahimi is not content to rest on her laurels. She sees a need for a new social contract to balance work and free time: “On the one hand, the situation has become more demanding with more flexible hours and the need to be constantly available. On the other, there has been a change in lifestyle, along with new ways of educating children and different demographics.” With clear focus, she steadily expands on a number of possible solutions, such as new approaches to working hours, further education and compensation for parents who cut back on their working hours.

A stronger approach to codetermination is another option to put an end to the lack of collective bargaining agreements in some firms. Unions are not just social movements: they must be more visible in companies. If not, they risk losing their meaning,” she exhorts. This is an issue she knows well. She spent over 15 years at the IG BCE. Some in the German media have somewhat ironically labelled her a “civil servant”.

Starting out in the SPD

Yasmin Fahimi was 19 when she joined the SPD and was spurred to get involved in politics by the very strong pacifist movement in Germany in the 1980s. Her parents were not politically active in the traditional sense but did “watch the news on television”. “My mother was not afraid to talk politics with us when we were kids and teenagers.” Through a number of encounters, such as her involvement with Jusos, the SPD youth movement, she decided to join the party. “We tackled major international issues; we talked a lot about the Sandinistas. We explored the question of violence and freedom. Where does it begin and where does it end? I found the SPD to be a convincing forum for political thought.” Soon, largely as a result of her foreign roots (her father is Iranian), she came to realise that her homeland did not end at the German border and that a number of different languages and cultures are an inescapable reality.

In appointing her to the job, SPD Chairman, Sigmar Gabriel, has sent out a strong message designed to reflect a sense of revival and to give the party a facelift. “I aim to bring a breath of fresh air and a new outlook,” promised Ms Fahimi on her election in January 2014.

Unknown to the general public before her nomination by Mr Gabriel, Ms Fahimi has yet to prove herself. Some observers see her appointment as a risky move on the part of the very powerful SPD chairman, who is expected to run for chancellor in 2017. When drawing comparisons with the previous grand coalition, Ms Fahimi remains a loyal SPD solider: “We highlight our plans more effectively. We keep our promises and that is something people can see. There are a number of issues in government that clearly bear the hallmark of the SPD.”

Advocating a Europe with more focus on social issues

On Europe, she regrets that social issues have been overlooked in the past few years. “Europe needs a policy of social justice and investment in the future. We do not need less Europe; we need more,” she insists, listing a number of Social Democrat proposals, such as giving the European Parliament greater powers, increasing investment in the future (education and employment) and introducing more benchmark social standards, such as a European minimum wage.

For Ms Fahimi, the first thing that springs to mind when asked about the future of Germany is the image of “an open, tolerant society with a flourishing democracy.” She herself could be seen as an ideal embodiment of this image, in terms of both her personal and professional achievements and background.