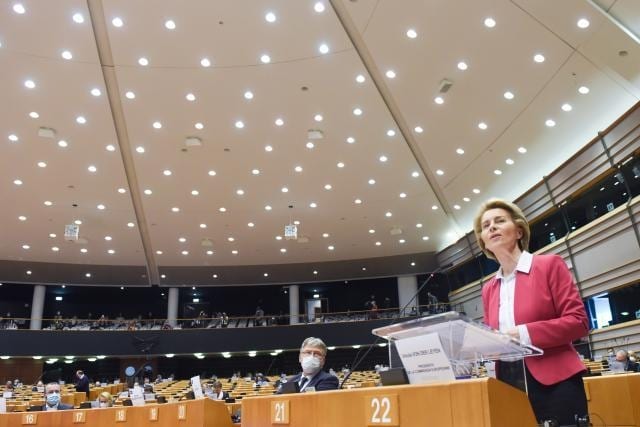 All crucial moments in the history of European integration have been like this: a deep crisis, a risk of collapse, a new collective solution. Will it be like this this time around?

When the current legislature began, the European Union already had challenges enough: big power games on the global stage, new geo-strategic tensions, weakened multilateralism, digital competition, climate change, increasing social inequalities, a surge of national-populisms, the alarming signal of Brexit. In face of all these, the choices were already clear: either muddling through and risk the fragmentation of the EU back into national entities, or pushing for a qualitative leap with stronger European solutions. Nevertheless, in this last case, another big choice would have to be made between just strengthening the strongest to the lead of the European Union or providing the conditions for all Member States, regions and citizens to improve their lives.

“The EU is now articulating its response under the star of a more enlightened vital solidarity among all Europeans.”

Then the COVID19 crisis came and it has now become a strong catalyst for all these challenges and choices. There are moments when history moves with a higher speed, and this is one of them. The virus is multidimensional and so is the crisis: it set off as a public health crisis, and now it paralyses or hinders economic activities, destroys jobs and incomes, undermines livelihoods, depletes public finances and shakes up our democracies.

After several weeks of disarray, the European Union is now articulating its response under the star of a more enlightened vital solidarity among all Europeans. A first package of financial instruments was launched to respond to the emergency of saving lives and saving jobs, including the innovative temporary Support to mitigate Unemployment Risks in an Emergency (SURE) and the powerful ECB bazooka.

Nevertheless, after an intensive debate at all levels, it became clear that the emergency would be followed by a deep recession requiring a powerful economic stimulus to avoid a downward spiral of less jobs and decreasing salaries, less consumption, less viable companies and – again – less jobs. So, a large-sized recovery plan became increasingly necessary. But this intensive debate also led to other two crucial conclusions:

First, the recovery should be about transforming our future and not just about going back to our past. Creating the conditions for an healthier life, a better relationship with nature and the planet, stepping up the transition to a low-carbon economy in all sectors, making the best of the new digital solutions, rebuilding European supply chains, protecting our strategic assets, strengthening European strategic autonomy, and developing our cooperation with neighbours and international partners.

Second, this recovery and transformation should be for all Member States, regions, and citizens and not just for a few, otherwise the existing divergences would create a dangerous fragmentation inside the European Union.

“We need to use fiscal policy and develop the capacity of our public budgets. And this is now being recognised.”

When these are the objectives – reshaping our development model and overcoming big social divides – the monetary policy and liquidity support are no longer enough. We need to use fiscal policy and develop the capacity of our public budgets. And this is now being recognised in the European Union, with the proposal to create a Recovery Fund “Next Generation Europe” to be combined with a re- adapted Multiannual financial framework.

Making an  historical parallel with the so called ‘Hamilton’s moment’ in US history is certainly an overstatement: the parallel with the Roosevelt’s moment is certainly more accurate, even if the European proportions are much smaller. In order to overcome the Great Depression of the 1930s, President Franklin D. Roosevelt introduced three main financial innovations: a bigger federal budget, to be financed by federal borrowing in the markets, which should be backed by new federal taxes.

This long-awaited breakthrough was made possible due to a particularly fortunate combination of forces: a European Parliament where the pro-European voices are strong enough, a timely, bold and coordinated action of progressive actors in all European institutions, a permanent pressure coming from civil society, a Franco-German deal pushed by Social-Democrats and the neutralisation of forces against vital European solidarity such as that of the ruling of the German Constitutional Court against the European Central Bank.

“Frugality is certainly a quality, but it is not enough when our common house is in flames.”

Some difficulties are still to be overcome such as the ones expressed by the “frugal four”. Everything depends on the perspective. It might seem that we are just borrowing to lend or to spend. But in fact, with a larger perspective, we are borrowing to invest and to change our collective future. Frugality is certainly a quality, but it is not enough when our common house is in flames.

Let us see how long does it will take to be understood all over the next chapters. But let us have no doubts: this historical breakthrough for the European Union can only be materialised if there is an agreement on the financial means to deliver it.