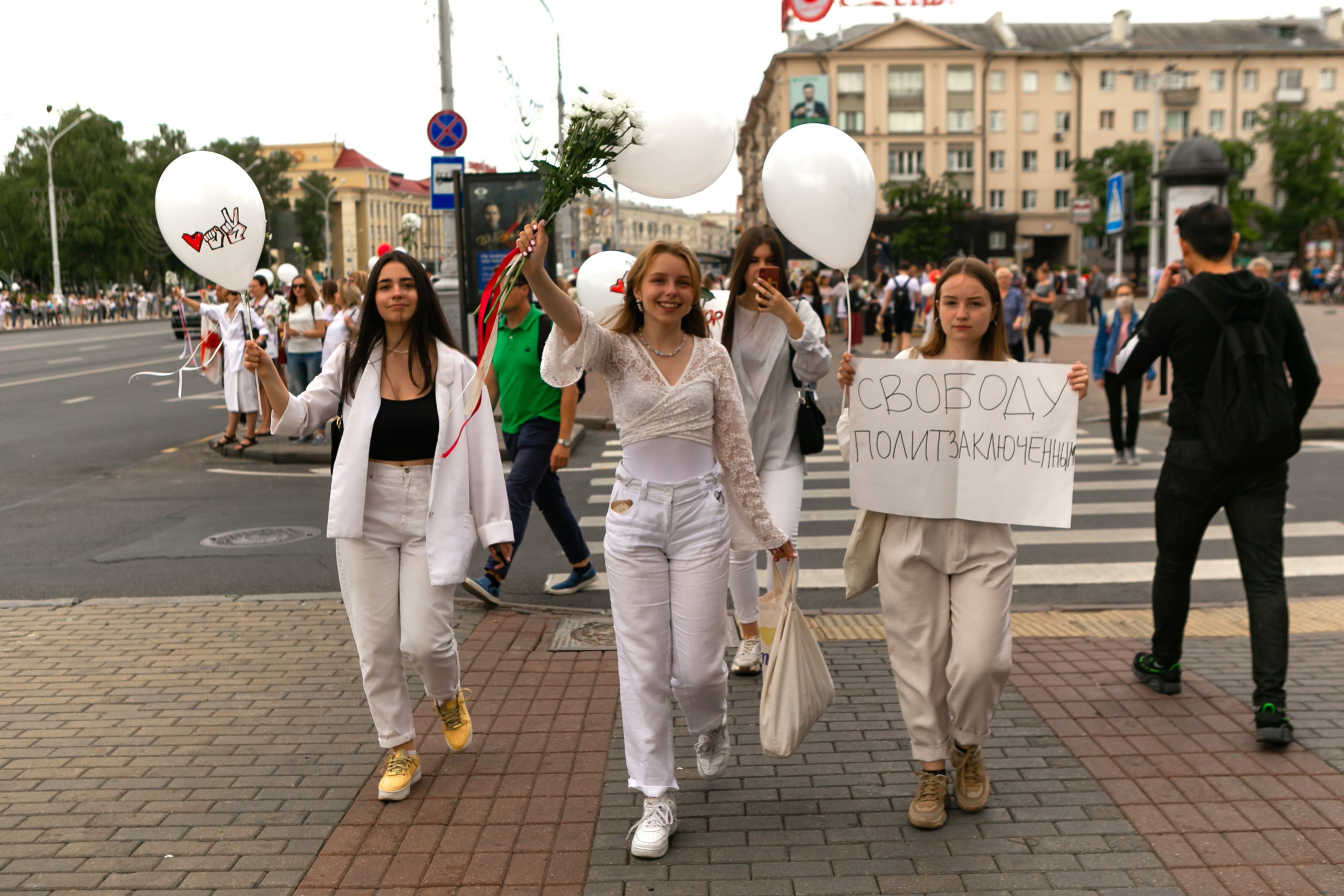 The Belarusian writer, 2015 Nobel Prize in Literature winner, and one of my favourite authors has written a book named “The Unwomanly Face of War” but unlike the war, the protest against the regime and President Alexander Lukashenko, known as ‘Europe’s last dictator’ in the streets of all major cities of Belarus that we are witnessing since 9 August, indeed has a face of women – and young people.

Lukashenko had the most important candidates running in the election either arrested or pushed into exile. But the result was not what he had hoped for, because their wives ran instead – and were carried by a new and huge wave of enthusiasm. Svetlana Tsikhanouskaya, Maria Kolesnikova, and Veronika Tsepkalo took a lead in the protests and gathered thousands around them. At the beginning, Lukashenko, did not take them seriously and tried to diminish them by mocking Tsikhanouskaya “she just cooked a tasty cutlet, maybe fed the children, and the cutlet smelled nice, and now there’s supposed to be a debate about some issues.” As if being a housewife was something to be belittled for.

He underestimated the women, until demonstrations in support of them spread all the way into the villages. Why and how these ‘housewives’ managed to gather so many protesters around? Apart from how Belarusian people are fed up with the regime and from the fact that all male political leaders were arrested, the skills and abilities of the women in charge matters. We should not forget that women kept the country together following the collapse of the Soviet Union, not only in Belarus but in many post-Soviet states. While a lot of men fell into despair after witnessing the collapse of socialism and the transition into the wild capitalism, women took a lead in managing households and assuming breadwinners’ responsibilities – which, however, did not automatically result in their economic emancipation.

But the brave women of Belarus are not the only ones leading the protest, we also see a lot of young people and students in the demonstrations and strikes. It is not surprising that youth are always the first ones challenging unjust systems all over the world, and Belarusian youth are no exception! Raised mostly under Lukashenko’s regime (since 1994) they have not seen any other president or a party in power in their lifetime. In these years, youth organisations have never submitted to the regime and therefore they were the most discriminated against by it. Since the 2000s, the authorities tried to repress the youth and student organisation. In 2006, they prohibited the Belarusian national youth council (RADA) to organise any activities. They detained young leaders of student associations, members of the RADA, and of the Young Social Democrats /Molodaya Hramada (MSD-MH). Instead, the regime supported GONGOs (‘Government organised or operated NGOs’), who very often dismissed the reports on torture and human rights violations delivered by the youth organisations. In the words of Lavon Marozau, the International Secretary of the Belarusian National Youth Council, “the government considers us an enemy in our own country, if one works on human rights protection and in an NGO.”

Since August, the administrations of universities and institutes started expelling and intimidating students who were participating in peaceful assemblies. Rudeness, refusal to talk, psychological pressure, blackmail by the payment or withholding of scholarships and awards, and calls to riot police against peaceful student actions are the ways the young rebels are punished.

But young people have had enough. After more than 100 days of protest, they still are not planning to surrender to the oppressive regime, and there is no way back. Other groups of the population also agree that Lukashenko and his followers are conducting a hybrid civil war against the other half of the population. The ‘enemies’ of the regime are not only young people and women, but the protest spread cross generation and social and economic classes. There is a lot of solidarity between those groups, factory workers have been on strike, youth have been mobilising social media campaigns, women have shielded protesters to protect them from brutal violence. This visible solidarity and unity between very different people can be one of the premises of the success of the protests.

And indeed, the protests are already successful, even if Lukashenko’s regime still detains people, tortures, beat and attacks them in the streets of Belarus. It becomes increasingly clear that this is the final, and desperate, attempt of a dictator who clings into power by all means. At the end, the Belarusian people, women and men, young and old already won, they already managed to mobilise unprecedented amounts of people around the same aim: to live in a better, a more democratic, more just and free country.

The regime continues to oppress, but the terror and fear that they are trying to pursue will never manage to overrule the power of solidarity. It will make it even stronger, even fiercer. It is still not clear how the country will overcome the current political crisis, but one thing is already clear – Belarus will never be the same. Thousands of people have been beaten, hundreds arrested or convicted, and many are dead. This is the face of the Lukashenko’s regime at its last stage. There is no way to bridge this gap between his regime and Belarusian people anymore.