by Luca Visentini
General Secretary
by Nicolas Schmit
Minister of Labour, Employment and the Social and Solidarity Economy 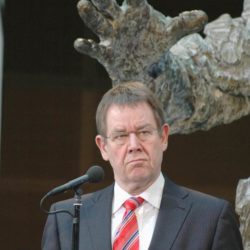 The Left must seize European elections as opportunity to transform Europe and guarantee sustainable well-being for everyone.

The current European project is unable to build a prosperous, shared future for everyone in all countries – economic and social indicators across Europe clearly point in this direction. Certainly, the European economic and social model is still better than that of the United States or China, but for several decades it has been undermined by globalisation and policies that fail to promote social justice, accelerated by the recessions following the 2008 financial crisis.

Wages have stalled, and the excessive pay gaps generated by wage competition and labour flexibility have widened inequalities. In some countries, youth unemployment is still unacceptably high, forcing whole generations of well-educated young people to seek employment elsewhere, in other countries, often against their wishes.

Therefore there is a growing sense of disillusionment and anger among those who see themselves as the losers in economic change.

Young people are particularly affected by the growing precariousness of jobs which prevent them from developing their life plans. The poverty that was supposed to fall is now blighting the lives of nearly one quarter of Europeans and nearly one in three children. Therefore there is a growing sense of disillusionment and anger among those who see themselves as the losers in economic change. The fear of falling living standards that is spreading among the middle classes helps in turn to fuel the populist and authoritarian currents that often play on these fears by highlighting the migration issue.

This social crisis, which is evolving dangerously towards a questioning of the fundamental values ​​on which the European project was built and the concentration of wealth on the other side are increasingly scandalous. Citizens hear regularly of tax evasion and cheating on a large scale that deprive states of funding, forcing them to tighten budgets and cut social protection and social investments, in particular.

More than half of European adults think that their children will have a harder life and a higher risk of experiencing poverty during adulthood. In most European countries, more than eight out of ten people believe that income inequalities have grown too great.This economic and social crisis undermines not only the European project, but also the democratic system. It is turning into a real political crisis.

At the same time, our planet faces another worldwide crisis: global warming and the accelerating destruction of the natural environment. The latest report from the Intergovernmental Panel on Climate Change (IPCC) demonstrates how de-carbonisation has become an emergency.

The ecological challenges call for vigorous action, particularly with regard to air quality and the pollution of both oceans and land through the misuse of fertilizers and other chemicals. These by-products of our production and consumption systems threaten our societies and risk provoking, as a result of the environmental crisis, other crises on a global scale. They are also, increasingly, a source of new inequalities, as they often disproportionately affect those who are already more socially vulnerable. However, to date, our social protection systems do not yet take account of the full extent of these inequalities. They have neither the resources nor the tools to deal with them.

We must urgently question our current model of development and propose another path – that of a truly sustainable and just society.

The necessary transition to a socially and environmentally sustainable development model and the technological revolution triggered by digitisation and automation of the economy and advances in the fields of artificial intelligence and robotics threaten to cause lasting upheaval in our societies and already fragile labour markets. That is why a ‘just transition’ must be brought about by all means available and in all European countries.
With the upcoming European elections, the most significant fact is that current EU leadership is not up to dealing with the quadruple crises – economic, social, environmental and political – that feed off each other. These crises share a common source – the economic system that has emerged from several decades of neoliberalism. This neoliberal narrative has imposed itself through European texts and policies prioritising the market rather than the citizens.

Europe had a real opportunity when, in 2015, all its national governments signed up to the 2030 Sustainable Development Goals at the United Nations. However, to date, neither the outgoing European Commission nor the governments in the European Council have taken initiatives to launch a real, sustainable transformation of our economies in line with these economic, social and environmental objectives.

This is why the next European elections are of historical importance. The following five years will be decisive not only for the fight against climate change, but also to implement policies that can tackle the social and economic crises, and thus avoid Europe sinking into an even more devastating political and democratic situation.

Some would like to reduce the political battle over the European elections to a clash between pro-Europeans and democrats on the one hand, and anti-Europeans and autocrats on the other. But that would be falling in line with the nationalist and xenophobic parties’ storytelling. This simplistic approach to the political debate would suit them just as well as those whose political project is nothing more than maintaining the status quo.

What is needed to revive the European project is a change of course.
Europe must give itself the means to defend, restore and make sustainable its economic and social model. It must identify itself once more with its initial commitment to prosperity for all, within the limits of our planet. It must respond more effectively to the concerns of citizens who feel side-lined and who, in their disillusionment, turn towards populists whose policies have always led to failure.
Europe’s change of direction must fix as its top priority the sustainable wellbeing of all, and establish the means to achieve it, specifically by reinforcing democracy including in economic and social areas, by more courageous policies on economic and financial governance, by a massive investment programme to underpin far-reaching ecological and technological transitions for the benefit of all, by creating large numbers of quality jobs to put the whole of Europe back to work, by strengthening social policies, by a better distribution of wealth including through more efficient and fairer tax systems, and by a just environmental transition for all.

We must urgently question our current model of development and propose another path – that of a truly sustainable and just society.

In a globalised world, no European country is powerful enough to bring about these great transformations, but together they can. This is where the destiny of Europe coincides with that of the Left. Their simultaneous crises are not an accident of timing. Socialist and social-democratic parties as well as trade union movements played a decisive role after the Second World War in building a Europe that would ensure peace and prosperity for all. To confront current dangers, and their own decline, they need to find new momentum.
We call on the European Left to live up to this historic new challenge and to approach the European elections equipped with a real plan for a just and sustainable society, to overcome both the European crisis and its own.

Poul Nyrup Rasmussen is the former President of the Party of European Socialists, and former Prime Minister of Denmark

Nicolas Schmit is Minister of Labour, Employment and Social and Solidarity Economy in Luxembourg