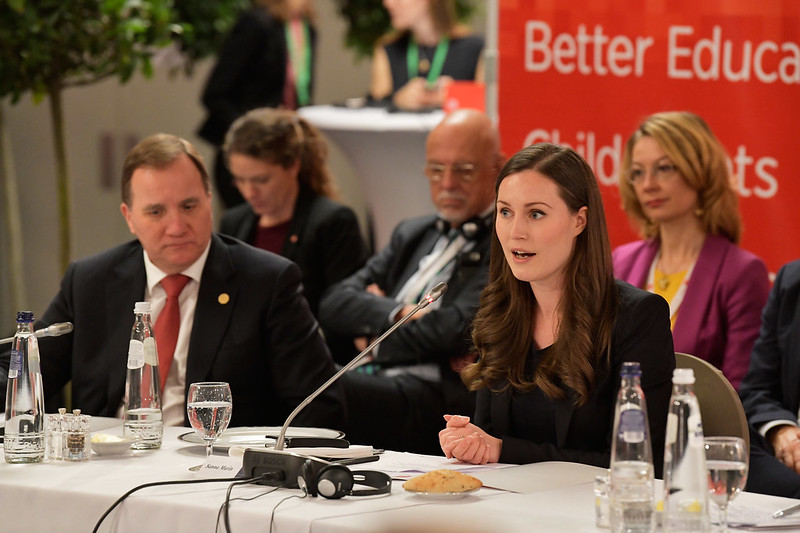 by Ania Skrzypek
Director for Research and Training

It has become a well-known truth that in the time of the ultimate test – Covid – citizens turned to their governments. They have been looking for protection, for help and for reassurance, that collective effort can make the pandemic fade away. Social Democrats who were at the helm of their respective countries have embraced that renewed trust in public institutions, keeping the steers with steady hands, cool minds, and open hearts. They sought to go beyond mere crisis management. They have aspired to govern. Consequently, they have ensured that state aid has been directed to attain two matching goals: providing a relief for the societies in crisis and delivering investment needed to realise a long-term pledge. The latter would encompass commitments like greening the economy, making gender equality a reality and making sure that digitalisation serves the collective needs.

This two-folded approach has been a qualitative change compared to the previous crisis of 2008-09. Back then, according to the understanding which was eventually forged, it was too robust public spending that made the socio-economic model feeble. And since it was repeated frequently enough by many on the centre and centre-right that universal provision of robust welfare policies is ineffective, unaffordable, and mismatching the aspirations of contemporary societies, opting for austerity looked like the logical solution. As some authors put it: it was a terrible idea indeed, which against all the predictions, led to the strange non-death of neo-liberalism.

But a decade later, there is a consensus about the erosive impact the austerity had on both societies and economies. And there is also a painful clarity about the political consequences that Social Democrats suffered for having backed it up (or at least for not having rejected it altogether), in terms of declining electoral support and depleting political capital. In the aftermath of the financial crisis, citizens took their case for more equality and social justice onto the streets, not trusting anymore that Social Democrats would be their political agents for change. This further shook Social Democrats and their confidence. In many countries, it affected their ability to come forward with bolder proposals, especially on economics.

In the midst of the recent crisis the way of thinking and the narrative have been quite different from the ones of a decade before. And they clearly worked for the Social Democrats in government, who month after month, remained stable and well off in the polls – looking at the Spanish PSOE, PS Portugal, the Swedish SAP, SD Finland and SD Denmark (the Maltese LP has been a little bit of an exception). But while their policies have been welcome, while their Prime Ministers in general got to be considered as the most trusted politicians in the respective countries, and while one could have an impression that citizens have been rallying around the progressive version of governance – this cannot be confused with winning a programmatic battle. The lessons from the previous crash still remain valid: nothing happens by default. That is why instead of anticipating an automatic paradigm shift, Social Democrats should be articulating what kind of state they want to build when the emergency is over. One that embodies a new social contract that societies already have come to demand.

To succeed in that mission, Social Democrats should keep several points in mind. First of all, Covid made individuals realise how much they rely on one another, on collective action and on the state to provide public services (with healthcare being at the forefront among them). But while this may signalise a popular appetite for restoration and expansion of the welfare state, it does not mean that progressives can be the vanguard of this debate either with a sentimental reference to their historical legacies, or with a message ‘you see, we told you’. To the contrary, arguments have to be coined anew. Social Democrats need to prove that they have developed a profound understanding of the major social challenges, that they grasp the dynamic of demographic developments and they have an answer to diverse inequalities, which have been both magnified and multiplied by Covid-crisis. To that end, Social Democrats must show that not only they have an ability to provide sound and sustainable solutions, but also that they have regained confidence in their own proposals and that they really mean it, when they ask the electorates to be entrusted with public mandate again. In other words, they cannot look back, they have to look forward, offering both reassurance for now and a long-term vision that should build on aspiration to create a better future for everyone. An excellent example of how it can be done, and how being visionary can be matched with the ability to deliver, is the approach in Finland. There, when government rushed to aid (workers, SMEs etc.), at the same time it looked at how to upgrade the existing strategies to fight inequalities (ie gender inequality) and, simultaneously, it launched a nation-wide consultation on “the Finland we want in 2050”.

Secondly, Covid has been an extraordinary, moment in which people were exposed to danger and felt incomparably anxious. Though locked in the respective confinements, they developed a sense of solidarity with one another, as well as an admiration for those who have been at the forefront of the fight with the pandemic. They (re)developed a sense of altruism, which prompted many to volunteer, also in their local community. But those powerful feelings, echoed in gestures such as the daily public applause for care workers and medical personal, are already fading away by now. They are being overshadowed by Covid-fatigue and the eagerness to ‘put it all behind’ and to get back to normality.

With the socio-emotional context changing already, progressives cannot expect to anchor their appeal for a new welfare state in sentiments from a couple of weeks ago. This will not be enough, even to explain why there would be a need for a state to provide better care, to invest in salaries of the employees of the care sector or to collect more funds via taxes in order to further boost science and research. Therefore, instead of running after past emotions, progressives should position themselves in a way that allows them to act upon another set of sentiments that are bound to come with the recession, inflation and unemployment. This will be the time in which pragmatism and hard numbers will matter, making it possible for progressives to finally win with the argument that only egalitarian, socially just economies, which trust in entrepreneurial capacities of the people and offer them both support and opportunities, are truly resilient, productive and efficient. Examples that come to mind are PSOE governmental policies, which led to reprofiling the factories production lines and the retraining of workers – enabling them to play a pivotal role in supplying the on-demand products of masks and gloves for example) and avoiding closures, unemployment and the payment of benefits.

Thirdly, while the impact of Covid may have created a context in which Social Democrats can make a point and politically bounce back, arguing for a new kind of welfare state, they should not expect that their proposals will remain unchallenged. When looking at the recent elections – in the Netherlands, in Bulgaria or even the regional ones in the UK – it seems that not only centre-right or right, but also nationalists and radical forces are doing utmost to claim that subject. While Social Democrats, in general, do not have obvious credentials on the matter due to their positioning in 2008-2009, the situation requires that they define what makes their approach to the debates about the state and specifically the new welfare state distinctive. A part of an answer, complementary and partially embedded in the socio-economic dimension, lays with the empowerment of individuals, and by extension: a need for a post-Covid re-democratisation. Consequently, Progressives should be about setting a tone for the debate about rights, the role of representative bodies and the logic of the decision-making processes – with a focus on how to ensure the primacy of politics and how to, however simple it may sound, make sure that a stronger state is all about bringing power back into the hands of the people.

In short, indeed, this is the time to reframe the concept of the state and to set the ambition for a new welfare state. But Social Democrats will not be the only ones aiming to do so, and consequently they need to prepare for a tough fight. It will be one where three things are important: regain confidence, look forward and dare more.

Progressive agents of change, by Felix Butzlaff
Post-pandemic recovery: a blueprint for progressives, by Dmitris Tsarouhas