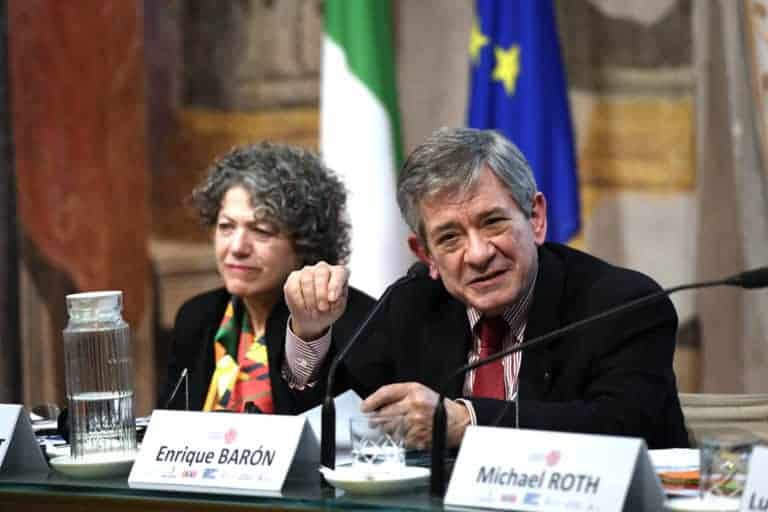 by Enrique Barón
Former President of the European Parliament

The best way to celebrate the 60th birthday of the Treaty of Rome is to insert it in a narrative. Treaties do not appear like mushrooms after the rain. De Gaulle said rightly that “Treaties are like roses.., they last while they last”. And this Treaty is lasting.

If we want a more inclusive, more political, more democratic Europe beyond populism, the best pedagogy is to explain why this Treaty has grown and produced roses. The most beautiful ones are doubtlessly the first three articles of the Treaty of Lisbon that allow as to speak of a vibrant supranational democracy. To explain and defend them is our best answer to populist virus.

For this purpose, it is useful to explain how did proceed the gestation of the Treaty of Rome. The nascent Europe was in deep crisis after the rejection of the European Community of Defense by the French Assemblée Nationale in 1954. In this field, it is still work in progress.

They did not know how to proceed. The Italian Foreign Minister, the Liberal Gaetano di Martino invited his fellow Ministers to meet in Messina in 1955 because he was campaigning. It was Sicily in the spring. All his fellow Members accepted. Among them were the Belgian Socialist Paul Henri Spaak that chaired the Conference that drafted the Treaty, the German Christian democrat Walter Hallstein, later President of the Commission and the Dutch Minister Beyen who made the proposal of   transforming the sectoral coal and steel common market in a comprehensive one.

There was not progress at the beginning, so they spent the first night in a ballet show in the Greek Theater of Taormina. The inspiration arrived through the number two of the delegations that began to draft the Declaration of Messina. A key role was played by Pierre Uri, a French socialist economist who was the ghostwriter   of Jean Monnet. Later on, he was the main drafter of the Treaty of Rome with the cooperation of the German Hans von den Groeben, later Vicepresident of the Comission. A beautiful example of reconciliation, a French Jew discriminated by the Vichy Regime working together with a former Beamte of the Reich.

The result was the Treaty of Rome, signed solemnly in the Capitolio. The leaders signed a text with only the front page, because there was no time enough to translate it in all the official languages. According to the diplomatic rules, it would have been null and void. However it is still alive and bourgeoning nowadays. This is the way we build the European Union, from crisis to crisis as Jean Monnet rightly forecasted.

Now, we celebrate the 60th birthday in Rome with the present of the White Book of Comission Juncker on the table, added to the report of the 5 Presidents for the EU in 2025. The key point are not the 5 scenarios, drafted skillfully for knowing your position while keeping its own card close to the chest. The most interesting page is the 28th with a road map “from Rome to the European Parliament elections in 2019”. We cannot say only that we want a different Europe, we must state clearly what we want to change and what we want to preserve as solid foundations of the EU that we have been building through this 60 years. By the way, there are some useful informations missing in the White Book. For example, there are at least 25 mechanisms of differentiated integration working in the EU at present. Some of them include even non Member States. So the debate on multispeed is not a theoretical one. Nor the debate on a hard core formed by the Eurogroup.

The key question is the respect of the Covenant that is the basis of the Union,  enshrined for the first time in the 3 first articles of the Treaty of Lisbon on Principles, Values and Aims, rescued from the failed Constitution. Values such as respect for human dignity, freedom, democracy, equality, the rule of law and respect for human rights, including the rights of minorities, pluralism, non-discrimination, tolerance, justice, solidarity and equality between women and men

Union’s Aims are to promote peace and the well-being of its peoples. offering its citizens an area of freedom, security and justice without internal frontiers, with free movement of persons and respect to external border controls, asylum, immigration and the prevention and combating of crime, an internal market, a sustainable development of Europe based on balanced economic growth and price stability, and an economic and monetary union whose currency is the euro.

Some of the Aims clearly go beyond the classic liberal credo like a social market economy, aiming at full employment and social progress, combating social exclusion and discrimination, promoting social justice and protection, solidarity between generations, protection of the rights of the child, promoting economic, social and territorial cohesion and respecting its rich cultural and linguistic diversity. In its relations with the wider world, the Union shall uphold and promote its values with respect for the principles of the United Nations Charter.

For this reason, it was unacceptable the position of Cameron when he began the negotiation of the failed British referendum trying to emasculate the EU, deleting from article 1st of the Treaty existing since the Treaty of Rome the paragraph on “creating an ever closer union among the peoples of Europe”. When he tried to reverse the message it was too late.

We must be very careful with proposals that alter the checks and balances of the system. All changes must respect the equity and the rights of the states to participate. We must not add institutions that create different levels inside the Union. Creating a new Parliament at second level for the members of the Eurogroup with committees of the national parliaments would be not only a travel to the past. I fear that the debate between the German Bundestag and the Italian Camera dei Deputati would be a remake on the famous debate between the Pope and Luther on the unfair taxation system of the papal bull updated with the Maastricht criteria.

The best way to celebrate the 60th Birthday of the Treaty would be an agreement of all Member states proposing to include topic lectures in all European schools of the three first articles of the Treaty of Lisbon. Young people could get an understandable narrative of the last purpose of our common Endeavour, looking for the next European elections of 2019.  It would be useful to add an advice of Pierre Uri, always relevant: “Every time I can push forward a European project, I do it. I am convinced that Europe is the only design worthy of our world and our time”.