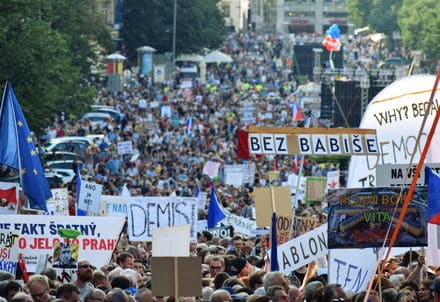 The disadvantageous government coalition with the pragmatic-populist ANO party (Renew Europe) led by Andrej Babiš is a threat not only to ČSSD but to the left as such. An easy solution does not seem to be on the horizon.

I wonder how many members of the Czech Social Democratic Party were present at the hundred-thousand demonstration in Prague this June. And how many of them came to peace with the fact that they were de facto protesting against their own government, in which the Social Democrats are the junior partner to the populist party of Andrej Babiš. How many of them thought to themselves – I was originally against entering the coalition, but the majority of my party made a different decision in an internal referendum, so I am going to respect it? For me personally, the main reason for attending the demonstration was the growing feeling that by tying up with Andrej Babiš, the Czech Social Democrats are risking their further existence. And as a matter of fact, so does the entire Czech left.

The ANO party of Andrej Babiš, which is now a member of the Renew Europe group, is a pragmatic political conglomerate that has adopted some left-wing themes for populist reasons and thus has gained a significant portion of left-wing voters. Before this, they did a similar thing to the right too. Babiš now portrays himself as a socially more empathetic alternative to the neoliberals in the Opposition – de facto putting his party in the role of a left-wing party. The Opposition leaders of the conservative right have pretty much confirmed this narrative by defining the fight against ANO as a fight against the left. Furthermore, all achievements of the coalition government are attributed to the dominant ANO, whereas all failures of the Social Democrats fall only on themselves.

Social Democrats, as the weaker coalition partner, have their hands tied when it comes to criticising Babiš. However, Jana Maláčová, the Minister for Labour and Social Affairs and most prominent face of the Social Democratic Party, has been facing strong criticism from right-wing politicians and the public for her truly social politics, which has earned her the unflattering nickname of “Venezuela”. The entire layout of political parties in the Czech Republic has clearly shifted to the right, whereas “the left” is currently occupied only by the pragmatic and pro-business ANO party. The Opposition therefore predominantly criticises it from a right-wing point of view.

The picture is completed by the nationalistic SPD (ID) and the communists of KSČM (GUE/NGL), who both, just as their respective European counterparts, possess some of the social accents but don’t bother combining them with a democratic focus. “The left” is therefore identified by pragmatic populism on the one hand, and by brownish nationalism with a penchant for an autocratic rule on the other. A liberal left seems to be doomed for marginality (as the Greens and now social democrats have demonstrated).

The fate of the Czech national (democratic) Socialists represented by president Edvard Beneš or Milada Horáková – once a similarly strong and respectable party, now without any political influence – is yet to be decided.

After the trashing in the euro elections, the Facebook profile of the Social Democratic leader Jan Hamáček turned into an interesting forum. Besides comments of malevolent joy and ridicule, some people offered sincere advice on how the Social Democratic Party could rebound from rock bottom. Essentially, there were two types of advice – but mutually conflicting ones. One point of view was that the Social Democrats should leave the Government and the second voiced the exact opposite: stay in the Government, improve the relationship with Babiš and get rid of the problem makers within the party – the left-wing liberals. Both points of view, it seems, had a similar level of support.

This illustrates the despair that the oldest Czech political party has gotten itself into. It is falling steeply in popularity whilst remaining a broad-spectrum party, which could be perceived as being incomprehensible, neutral, and confusing in its general outlook. Naturally, such a party cannot gain much support as it seems an unnecessary political subject. The fate of the Czech national (democratic) Socialists represented by president Edvard Beneš or Milada Horáková – once a similarly strong and respectable party, now without any political influence – is yet to be decided.

An early election would probably send the Social Democratic Party to or even below the threshold for entering the parliament. However, the question is whether the continuing participation in Babiš’s government, which is drowning in scandals, won’t bring about more problems for the Social Democrats than leaving it. The current party leadership committed itself to the Government project and it seems they will want to carry on till the very end. That end, however, could be very bitter. One thing is for sure – it’s difficult to recommend what Jan Hamáček and his colleagues should do. There doesn’t seem to be an easy solution.

In opposition, the Social Democrats could resurge and gain strength but considering the current state of the party, that does not seem likely.

Leaving the Government and calling an early election would realistically prove detrimental to their interests. They could quickly sink into oblivion. In opposition, the Social Democrats could resurge and gain strength but considering the current state of the party, that does not seem likely. It would take a lot of work, starting from the bottom, so it’s understandable that the party’s leadership prefers to safeguard their current government position.

From a long-term point of view, it would probably be prudent to start the catharsis as soon as possible. If the Czech Social Democracy wants to survive, it must, in any case, find new energy, a legible and comprehensive manifesto, competent and trustworthy politicians, and attract new members. That applies no matter if choosing opposition or government. But it will undoubtedly be a little harder in the current government trap.

This is a translated and edited version of an article originally published by Deník Referendum : http://denikreferendum.cz/clanek/29686-socialni-demokracie-ve-vladni-pasti