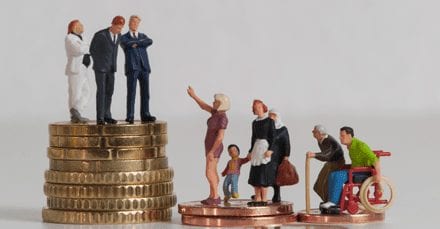 According to a recent German study, inequality regarding access to education and health care, raises the probability of the collapse of democracy.

Coups, revolutions and other changes of political regimes are one of the oldest topics for political science research. Thanks to the hard work of many researchers, we now have a myriad of possible explanations. From a historical point of view, the two most influential ones are: one, the behaviour of political elites and second, the institutional configuration of the whole political system.

However, if one uses non-aggregated social inequality indicators instead of the GINI index, the situation is suddenly different.

The economic explanations occur especially in relation to the theories of modernisation. This tradition argues that maintaining democracy is difficult in countries that are poor or in a bad state of the economy. Similarly, to other disciplines, the lack of data and different research methods have been the main limitations of older studies, which meant that many of the conclusions were based solely on a few observations, substandard data, or even mainly  on anecdotal evidence. It has been evident in recent years that as the quality of data and its analysis increases, so does the demand for the re-evaluation of classical theories.

The attempt to verify the existing knowledge was probably what led the researchers from Germany to look into the influence of social inequality on the stability of democracy. The conclusions of previous studies contradicted each other, so the outcomes were largely dependent on the selected case studies or the time frame. Leininger, Lührmann, and Sigman therefore decided to conduct a statistical analysis of all democracies that have existed since the Second World War.

The first outcome of the entire study reminds us that we should describe the world around us with aggregated data as little as possible. Researchers can and often have to use this kind of data but using similar indexes in public discourse can be very damaging.

The second outcome of the study fully confirms the sceptical voices that claim that it takes more to preserve democracy than removing a local oligarch from power or outlawing all past and future political projects of the local right-wing leader. Preserving democracy is a matter of every-day and long-term work.

It is simply incompatible to portray yourself as a saviour of democracy on the one hand and to fight against proposals aiming to lower the level of social inequality on the other. Democracy does not only die by the hands of right-wing populists but also by every unfair distraint and every unavailable alimony. Fighting for the rights of single mothers is probably not as media-efficient as arguing with an oligarch but it will be these socially disadvantaged citizens who will settle the score.

In today’s world, the easiest way to authoritarianism is through the polling stations.

Personalising this entire problem to an individual who is currently at power only postpones the solution to a time when it might be too late. The rise of left-wing populists in Latin America did indeed lead to the establishment of many terrible and non-democratic regimes but we must not forget that if it hadn’t been for the unfair neoliberal reforms and the long-term structural and economic disadvantaging of certain groups, there wouldn’t be a Maduro, Morales, or Ortega.

The Nicaraguan dictator, for instance, attracted support because the previous government had come up with a reform that made parents pay for their children’s primary education. This regulation clearly denied access to education to the poorest of citizens, who then made their opinion clear in the elections.

If we do not secure a democracy that enables a fair “life competition”, we may one day find ourselves in a situation where there is no democracy left for us to secure because voters tired of injustice had put someone in power who abolished it altogether. In today’s world, the easiest way to authoritarianism is through the polling stations. Therefore, to preserve democracy, we must make sure that we are defusing social inequality not fostering it. That is one of the recommendations that the authors of the researched offer us.

This is a translated and edited version of an article originally published by Deník Referendum : http://denikreferendum.cz/clanek/29820-bez-snizeni-socialni-nerovnosti-nelze-zachranovat-demokracii]