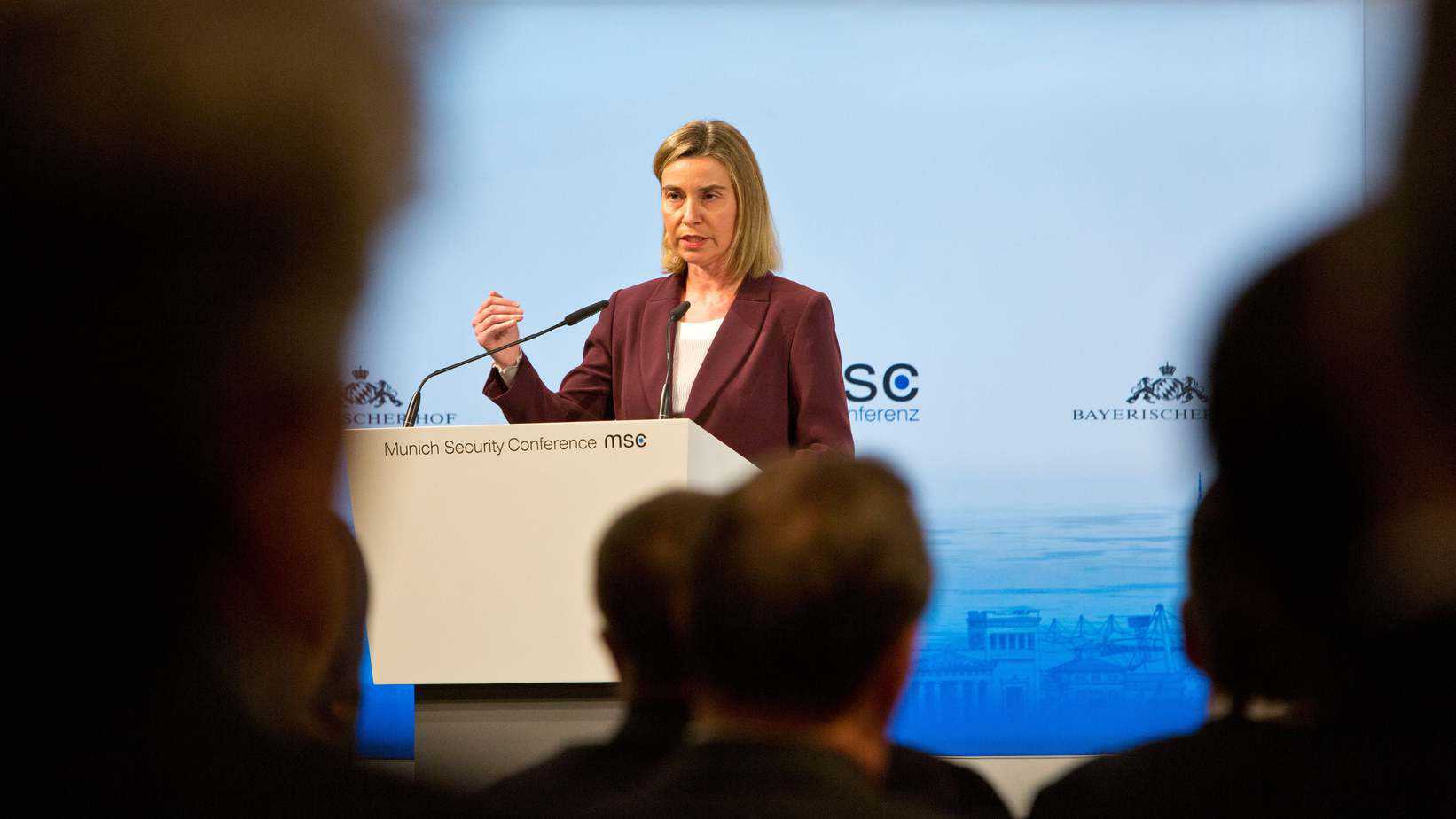 “It is fundamental and crucial for our security”. With these words, EU High Representative Federica Mogherini pushed back against renewed calls by the US to end Europe’s support for the Iran Nuclear Deal, or Joint Comprehensive Plan of Action (JCPOA) as it is formally called.

The statement was made at the Munich Security Conference on Friday 15 February, following Mogherini’s refusal to partake in the US-sponsored Warsaw summit on ‘Peace and Security in the Middle East’ that was held on 13-14 February in Poland. Shunned by major European states, which sent low level officials to Poland, the Warsaw summit has evidenced not only the deep rift between the US and its traditional European allies over Iran and the Middle East but also the growing hardship facing the US Trump administration and its regional allies in orchestrating an international campaign of multilateral pressure vis-à-vis Tehran.

Attended by over sixty nations, with Israel’s Benjamin Netanyahu being the only foreign head of present at the summit, the meeting quickly and predictably degenerated into a series of provocative statements on Iranian foreign policy.
While the US had promised a wide agenda, this was clearly little more than a tactical ploy aimed at overcoming European reluctance to join in on the US-led anti-Iran bonanza. Thankfully, European states had the foresight to not fall into this trap, displaying a rare unity of intent in supporting the JCPOA in the face of US pressure and threats.

Joining Mogherini in boycotting the summit, Russia, Turkey, Qatar, Palestine, Iraq and Lebanon also declined to participate, further highlighting the fallacy of Iran’s supposed international isolation. Not only did Moscow convene a trilateral summit with the heads of state of Turkey and Iran on Syria that coincided with what was supposed to be the highlight day of the Warsaw summit, the absence of key Arab states also serves as a reminder of Iranian influence in the region, making the US’s goal of establishing an ‘Arab (and Israeli) NATO’ to confront Iran little more than a delusion.

Decades of efforts to isolate Iran have not translated into a more stable and peaceful Middle East.

With US Secretary of State, Mike Pompeo, announcing to the media that “you can’t achieve stability in the Middle East without confronting Iran” and Rudy Giuliani, President Trump’s personal lawyer and former mayor of New York, calling for regime change in Iran at yet another rally of the Iranian opposition group, the People’s Mujahedin of Iran (MEK), in Warsaw, it is hard to see how such a conference can enhance ‘peace and security’ in the Middle East. To make matters worse, the official twitter account of Israeli Prime Minister (and Foreign Minister) Netanyahu, released (and subsequently deleted) a statement describing the summit as advancing the common Arab and Israeli “interest of war with Iran”, while circulating a leaked video of a discussion between Arab foreign ministers in which they claimed that if it was not for Iran’s “toxic” policies in the region, Arab states would have been much closer to resolving the conflict with Israel, presumably at the expense of Palestinians.
Decades of efforts to isolate Iran have not translated into a more stable and peaceful Middle East. Much the opposite. While the US Trump administration and its regional allies in Tel Aviv, Riyadh and the Abu Dhabi may be right in identifying Iran the as the primary – if not the only remaining – competitor to a US-dominated regional alliance framework, isolating Tehran is not only strategically impossible, it is also counterproductive.

Iran has demonstrated its ability to scuttle and frustrate US-Israeli-Saudi policies in the region when Teheran is purposely excluded from these efforts, or when such policies are inherently aimed at damaging Iranian interests. This has clearly been the case in Syria and Lebanon, but also in post-2003 Iraq, in the realm of the never-ending Arab-Israel-Palestinian diplomacy, in Yemen and may soon become so again in Afghanistan.

In all of these theatres, engaging Iran in tough diplomacy and negotiations rather than isolating it or seeking to harm its interests represents the advisable, if not the only, way forward.

Let us be clear. Engaging Iran is not equivalent to accommodating its ambitions or appeasing its policies. Yet, diplomacy and statecraft is just that: finding creative means to link multiple dossiers and issues through a process of negotiation, balancing and quid-pro-quo. Rarely – if ever – attempted in the past, seeking to enhance peace and stability in the Middle East without engaging Iran or accounting for its legitimate interests in certain theatres, is the equivalent of working towards the stabilization of the European continent while isolating and ignoring Russia.
Often billed as the underlining driver for instability in the Middle East, guided by a messianic and ideological inclination to dominate the region by exporting its Islamic Revolution and model of theocratic governance, Iranian foreign policy has in all actuality been rather calculated, risk-averse and predictable in its orientation. The same cannot be said of US policy or indeed of that of its two key partners in the region, Israel and Saudi Arabia. Iran’s complicity in the crimes of the Bashar al-Assad regime in Syria is beyond doubt and deserves a forcible rebuke, as does Tehran’s use of proxies in Gaza or in Yemen to threaten its regional adversaries in Israel and Saudi Arabia. Yet, one would be myopic in singling out Tehran as the greatest threat to regional security as is often done in Tel Aviv or Riyadh while ignoring the actions of these states vis-à-vis Yemen, Syria or the Palestinians.

While Iran’s regional adversaries may argue that their policies are a reaction to Iran’s expanded influence across Iraq, Syria, Lebanon and Yemen, the harbinger of this Iranian ascendancy has less to do with the appeal of Iranian foreign policy than with the strategic blunders of US foreign policy, to various extents supported by Tel Aviv and Riyadh. The 2003 US-led invasion and occupation of Iraq, in particular, created the groundwork for this Iranian ascendancy. Moreover, Iran is not the sole culprit for the carnage in Syria and cannot be blamed for the emergence of the Houthis across the Saudi’s boarder in Yemen. Wishful thinking and ‘with us or against us’ approaches do not make for intelligent foreign policy.

The US Trump administration is today committing yet another strategic blunder in the Middle East. Like Iraq in 2003, Washington’s decision to unilaterally withdraw from the JCPOA and embrace the Saudi and Israeli approach of “maximum pressure” vis-à-vis Iran that both actors had been calling for under the Obama administration is likely to further inflame the Middle East, weaken transatlantic unity and dilute (or perhaps even dissipate) what remains of US soft power and credibility.
Europe, Iran and the post-US JCPOA

EU High Representative Mogherini is therefore correct in her steadfast support for the JCPOA. The survival of the deal, while obviously not enough to bring ‘peace and stability’ to the Middle East, is vital to the EU’s credibility as a global actor, for the international non-proliferation regime and for European security interests, with European countries more exposed to Middle East turmoil than Washington.
Europe’s launching of the Special Purpose Vehicle (SPV) on 31 January is a welcome development, but will not be enough to ensure the survival of the agreement. Europe must therefore launch broader political, economic and strategic efforts to provide tangible results for average Iranian citizens who continue to view Europe and the West more generally as a more appealing destination compared to China or Russia.
Imaginative diplomacy is urgently needed. Building on Iran’s proud history and civilization, cultural diplomacy, combined with concerted efforts to increase student and business visa applications for Iranian citizens, with the appropriate controls, could represent further steps. Ensuring that Iran has access to western medical equipment and medicine as well as non-dual use technology used in universities or other critical social and economic sectors represent further avenues to explore. Finally, much more needs to be done in finding creative meant to allow Iran to continue exporting oil, a key commitment taken by Europe on the eve of the US’s re-imposition of sanctions on Tehran, but one that has thus far failed to materialize, with considerable repercussions on EU credibility and the Iranian economy.
Such action would increase the chances that Iran continues its abidance with the JCPOA, and as a result, should themselves also be framed as “fundamental and crucial for our security”. Europe is partially responsible for raising expectations in Iran and further afield on what Europe can deliver with respect to the JCPOA. Now is the time to move from statements to deeds, beginning to flex Europe’s political and economic muscles on the world stage. Otherwise, the risk will be that of further consolidating the impression of Europe being a toothless international actor, one that can achieve international breakthroughs only when acting in synergy with US interests.