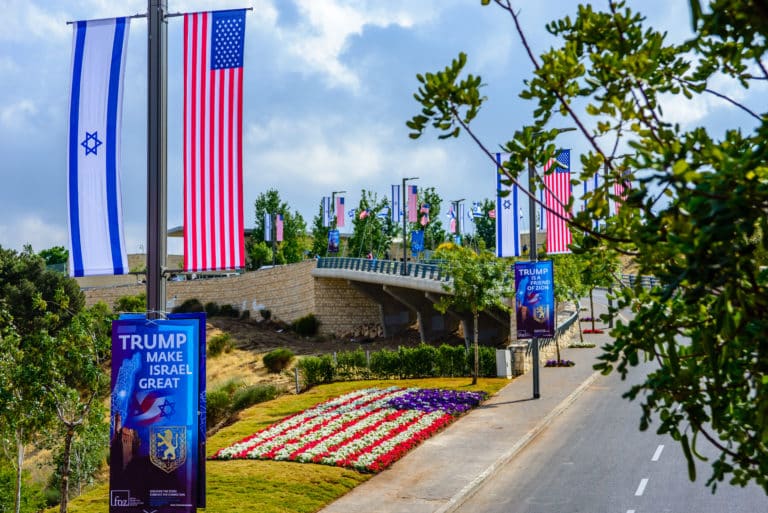 The Trump administration may not have yet formally unveiled its peace plan, but it is already moving to reshape the traditional realities that have governed the middle east peace process since the signing of the 1993 Oslo Accords.

The Trump administration may not have yet formally unveiled its peace plan, but it is already moving to reshape the traditional realities that have governed the middle east peace process since the signing of the 1993 Oslo Accords.
This approach reflects Trump’s statement that after more than two decades of failure “we cannot solve our problems by making the same failed assumptions and repeating the same failed strategies of the past”. On face value, such a view is a welcome acknowledgement of the current impasse, and should encourage a critical reassessment of the Oslo-configured Middle East Peace Process.

But there is a difference between rethinking a failed process as the means of reaching a final agreement, and rethinking the two state solution itself as the ultimate end goal

But there is a difference between rethinking a failed process as the means of reaching a final agreement, and rethinking the two state solution itself as the ultimate end goal. While both have been entwined over the last 25 years, they are not the same. In reassessing the United States’ approach to the Israeli-Palestinian conflict, President Trump risks throwing the proverbial baby out with the bath water.
Since entering office President Trump has steadily shifted US policy away from the international consensus positions that have long underpinned the two state solution. By recognising Jerusalem as Israel’s capital and taking the issue “off the table” Trump broke a decades-long international consensus that the city’s fate should be determined through negotiations. The elimination of US funding to UNRWA (the UN agency responsible for Palestinian refugees) amounts to a similar effort to take the right of return for Palestinian refugees – another final status issue – off the table.
American actions have fed concerns not just in Ramallah, but also in European capitals, that the Trump peace team is distancing the United States from its traditional iron-clad support for a two state solution. The international belief is that such a solution should be predicated on the establishment of fully independent and contiguous Palestinian state on the pre-June 1967 lines, and the resolution of final status parameters through negotiations.
Concerns have been heightened by the White House’s own ambiguity towards its ultimate objective. The President has continued to hedge, restating recently that “I’m OK with one-state, two-states, whatever”. The idea of a confederacy with Jordan has reportedly also been raised by his team, adding to the uncertainty.

Now more than ever it is important for the EU and its members to stand firm against the Trump administration’s attempts to hollow out the two state vision.

Admittedly, Trump may appear to be slowly warming to the idea of two states. But this label could well be misleading. As things stand, the US administration’s vision seems closer to that of prime minister Binyamin Netanyahu’s talk of resolving Palestinian self-determination through a “state minus”. At best, this would translate into American support for an autonomous Palestinian entity with limited sovereignty and undefined borders, and under continued Israeli military control.
Such a reality would be no different from the warnings made by the EU’s high representative Federica Mogherini about Israel’s potential drift towards “a one-state reality of unequal rights [for Palestinians], perpetual occupation and conflict.” Others, including senior Israeli officials and former prime minister Ehud Barak, have described such a situation as tantamount to apartheid.
Now more than ever it is important for the EU and its members to stand firm against the Trump administration’s attempts to hollow out the two state vision.
The EU must redouble their efforts to promote enforcement of past UN resolutions, including UNSCR 2334 and its endorsement of the EU’s policy of differentiation between Israel and the settlements. This should include supporting international accountability mechanisms, including the ICC’s investigation into the situation in Palestine, and the UN Human Rights Council’s database of business dealings with Israeli settlements.
Additionally, as President Trump and his team finalise their anticipated plan, the EU and like-minded partners should be clear that any initiative must be based on established two state parameters, in line with international law and past UN resolutions. A strong re-affirmation of long standing international positions – and EU policy – would not only provide a firm marker for future negotiations, but also act as an important yardstick with which to gauge US actions.
The role of parameters is not to impose a final agreement. Rather, it is to remind stakeholders – including the Trump administration – of the internationally supported end game of two states living side by side within secure and recognised borders based on the 4th June 1967 lines, with mutually agreed and equal [1:1] land swaps, and their respective capitals in Jerusalem. Only by fulfilling this two state vision can a just and lasting resolution to the conflict be achieved, leading to secure and peaceful relations between Arab states and Israel.