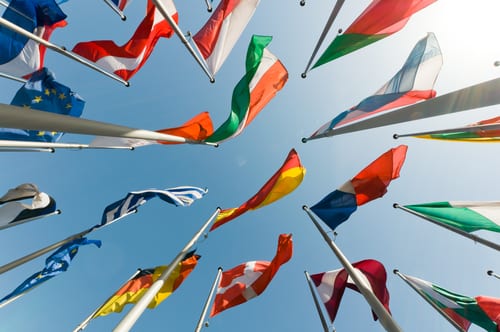 European unity is needed more than ever in face of the unprecedented health emergency. We have not seen such a fatal global pandemic for over a century – since the 1918 so-called Spanish Flu. Tackling the corona virus is rightly the top priority, even though it comes at a high economic cost.

It is not a choice between combatting corona virus and economic recovery as some, mainly right-wing, politicians seem to think. One must follow the other: there can be no reckless rush back to work (for those who have work to return to) that puts the lives of working people and their loved ones at risk.

“Who wants to go back to the former ‘normal’ were air pollution was killing city dwellers and where climate-changing emissions were killing our planet, our home?”

Those who dream of a ‘return to normal’ are fooling themselves. There can be no ‘back to business as usual’. t is not only because we need to continue protective measures such as social distancing and sanitising until a vaccine is available, but mainly because over 40 million workers in Europe have either lost their job or are temporarily suspended from work. If those who have lost their jobs are can’t return to work in the near future, and if a significant number of those who are temporarily suspended from work end up losing their jobs, unemployment will reach far higher levels than after the 2008 financial crisis, and we risk an economic crisis of an unprecedented scale since the 1930s. And who wants to go back to the former ‘normal’ were air pollution was killing city dwellers and where climate-changing emissions were killing our planet, our home?

On Europe Day, the EU needs to summon the spirit of Robert Schuman who had the ambition and vision to rebuild Europe after World War II and ensure lasting peace. Today’s politicians have had the courage to make tough decisions on lockdowns, even though in some cases it seems like it was late and that the delays have cost of many lives. Now they need to deliver the support they have promised to keep working people in jobs and with a decent income, and to swiftly plan and agree the biggest recovery programme since World War Two.

A recovery plan must deliver a fair share for all working people including the essential workers who are rightly applauded every evening. It must ensure that multi-national companies and rich individuals pay their fair share of taxes to fund public services and public service workers. It must help deliver the UN’s Paris Agreement and the climate action to which the world’s countries committed as well as clean the air we breathe.

“A significant pay rise for all European workers is the only way to boost internal demand and make our economy recover.”

It must mobilise massive investment of fresh public money into the renewal of our industry and economic activities in an environmentally and socially sustainable manner. It must also improve our welfare system and social model. All this cannot happen again by putting the burden on national public budgets through loans with tough conditions attached, but on the contrary by finally building a real economic and fiscal capacity for the EU to invest in a future where nobody is left behind.

Many working people’s wages have still not recovered from the last crisis. The reason for this is not the crisis alone but the catastrophic austerity measures adopted by Governments to make working people pay for bailing out the banks. Working people literally cannot afford repeating  austerity and wage restraint. On the contrary, a significant pay rise for all European workers is the only way to boost internal demand and make our economy recover.

The corona virus has shown us who is really essential to make our society tick – it is the nursing and care staff, the transport workers, teaching staff, cleaners, agricultural workers and many other undervalued and underpaid jobs. Suddenly the overpaid hedge fund managers and the super-rich do not seem quite so useful anymore.

Instead we should reward the essential workers (who have risked their lives working through the pandemic) with better pay and working conditions. We should make sure that all working people – including precarious and atypical workers and the self-employed – have proper income protection including unemployment and sickness benefits.

We need to get everyone back to work safely – those who have lost their jobs, those who have been suspended from work and those who were unemployed before the pandemic struck.

The pandemic has shown that we cannot simply return to the normal of global supply chains that cannot deliver basic necessities like personal protective equipment. We cannot return to underfunded health services without adequate intensive care facilities and unable to roll out basic testing programmes. We will no longer accept the ‘normal’ of multi-national companies and rich individuals using clever accounting tricks to avoid paying their fair share of taxes to fund public services such as health care, education and services for the elderly that are so obviously needed by all families.

We need to rethink our supply chains, which have shown not to be resilient to the disaster we are facing. Making our supply chains more sustainable, economically, environmentally and socially, by seeing how we can relocate some essential production to the EU single market and by building a level playing field of tax and social justice, is a top priority for the future.

“European democracy was put at risk by the financial crisis and austerity policies and it could be destroyed if Europe cannot cope with this new crisis in the right way.”

Already working people are suffering because only a tiny part has been paid out from the emergency measures announced by many national governments to keep workers in their jobs. In Italy out of 10 million workers eligible for income benefits only 1.5 million have received any payment. And the banking systems is blocking the money triggered by the ECB, by denying credit to companies and households in need. People are going without food, and companies are going bankrupt destroying millions of jobs. That situation will not get better, it will rather deteriorate if Europe suffers a serious and long recession.

That is why we need the emergency measures to be implemented as soon as possible, as well as an ambitious recovery strategy put in place by the EU and Member States. Political leaders must set their divisions and national egoisms apart and provide the solutions that companies, workers and citizens are awaiting. They must be forward-looking in designing permanent instruments to stabilise the EU’s capacity to invest and to protect its citizens from unemployment, poverty and social exclusion.

We come out of a decade of austerity and cuts, during which business interests and profits always came before the protection of people and before environmental and social justice. It is high time to change this short-sighted approach and build a future of prosperity and solidarity for all. European democracy was put at risk by the financial crisis and austerity policies and it could be destroyed if Europe cannot cope with this new crisis in the right way.