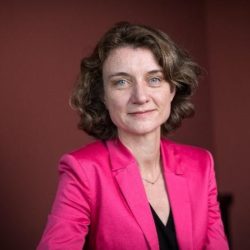 by Daniela Schwarzer
Executive Director, Europe and Eurasia at the Open Society Foundations

The debate about the EU’s strategic autonomy has picked up again – not least because the sudden US-withdrawal from Afghanistan in September 2021 surprised Europeans in such a bad way. One reason for this was the insufficient communication and coordination of Europe’s most important ally, the US. The second reason is that it made very clear to what extent European are depending on the US.

European governments were only able to evacuate their own citizens and Afghans who had worked with their embassies or military, let alone a few highly endangered activists, as long as the US military secured Kabul airport. In addition to this, the Afghanistan example also raises the policy question whether the EU is at all equipped to pursue a value-based and human rights-centred policy, and to what extent it needs to step up its capacities to do so.

European strategic autonomy does not imply that the EU attempts to go it alone or turn away from the US. A strategically autonomous EU is able to decide by itself and implement its choices, but it will do so within alliances and partnerships. It is able to work based on its own norms and interests. The EU as an international actor is traditionally deeply rooted in multilateral settings, in an international order based on the rules Europe and the US have contributed to shape.

The profound transformation of the international system has made European strategic autonomy necessary. The environment has become far more competitive and conflictual human rights are challenged, worldwide, very close to the EU and even within. The European project was developed within the so-called international liberal order made up of international organisations, laws, norms, regimes, and practices that were fully in line with European principles and protected by US power, including military power. This context is rapidly changing, and the EU has to contribute more to the defence of its principles and preferences.

If the EU cannot rely on the US as it once did, and it has to “work on itself” internally by strengthening its cohesion, resilience and capacity to act and on its external policies to increase its political, economic and strategic weight that it can put to the service of its principles. This includes economic and technological competitiveness which would help the EU defend not only its economic interests, but also to use its economic leverage to support initiatives to defend human rights or advance measures against climate change.

Moreover, the EU has to work very decisively on defending liberal democracy and the rule of law internally, as a failure to do so would very heavily impact its ability to defend these goals internationally.

The damage done to US democracy, under the Trump administration, has triggered a decline of American soft power. The Biden administration now very proactively tries to turn around these developments internally, but also internationally, as the US-President seeks to strengthen cooperation of democracies and works against previous isolationist tendencies.

European strategic autonomy in this changing environment remains a key goal – not against the US, but in a close partnership, in which Europe, hopefully, plays an increasingly important role. This would be beneficial for the EU: when the EU and the US diverge, as well as when converge.

The EU’s foreign policy approaches are founded on the values of respect for human dignity, freedom, democracy, equality, solidarity, the rule of law, and respect for human rights. Article 2 of the Treaty of the European Union (TEU) lays these grounds. In accordance with Article 21 TEU and the Union’s strategic interest, this should be reflected in an effective and coherent way, in all areas of the Union’s relations with non-EU countries.

The EU and its member states need to push back against the challenging of the international human rights framework and stand by its commitments to human rights and democracy. In the longer term, the EU member states should accept to move to qualified majority voting in the Council for human rights-related matters, in particular on issues falling under the EU action plan on human rights and democracy and for the adoption of sanctions. Also, the EU should speak with a single voice in multilateral forums, and act in unison when faced with crises that challenge its core values and interests. This is the only way the Union can play a leading role on the international scene and use its influence to bring about positive changes and more coordinated responses to global challenges, primarily the promotion and protection of human rights, as well as in the field of environmental and climate-related challenges. Only if its respect for freedom, democracy, human rights, the rule of law and equality are credible internally, will the EU retain credibility and be effective globally. Hence, the work begins at home.