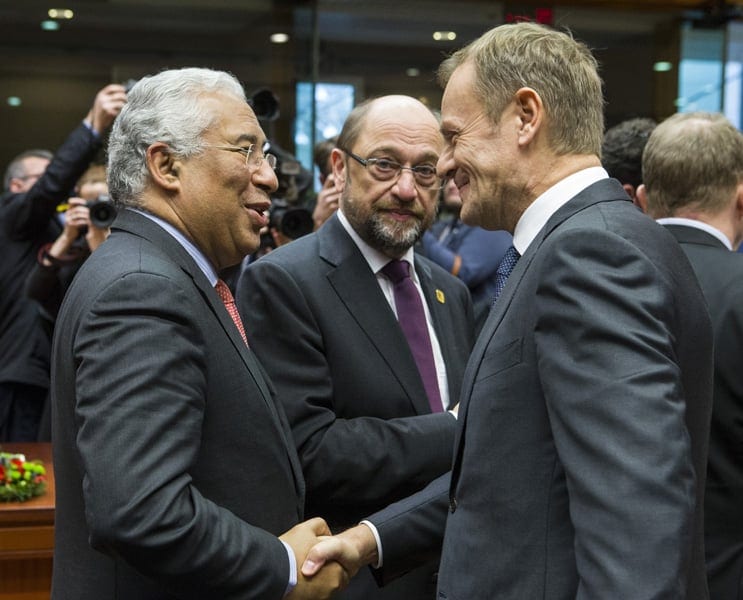 EU leaders met in Brussels last Thursday (December 15) for a year-end summit to discuss the crisis in Syria, economic sanctions on Russia, a trade deal with Ukraine and greater military cooperation. Economic and financial reforms, including the Digital Single Market and reforms for increasing the resilience of the financial sector were also on the agenda. The 27 leaders also agreed to start Brexit negotiations as soon as the UK given notification under article 50.

Nothing new on the “migration front”. This the first and main reaction one has reading the conclusions of the Council. In spite of the fact that migration was the first issue on the agenda, being one of the most crucial questions the EU is currently facing, the results of the discussion are (not surprisingly) very far from a breakthrough.

The European Council “reiterates its commitment to the EU-Turkey statement”, but it does not mention the recent and increasingly alarming political developments there; it does welcome “the progress on implementation of the compacts with five African countries of origin or transit” (High Representative Federica Mogherini presented to the European Council the second report on the deliverables of the New Partnership Framework with five countries [1]); and it “recalls the importance of adequate resources being put at the disposal of the European Asylum Support Office”.

The main focus, once more, is on the external dimension of the phenomenon, as the need to reinforce the current instruments of cooperation with third countries is stressed, together with the need to “enhance support” for the naval operations in the Mediterranean Sea and for the Libyan coastal guard. As far as addressing the root cause of the refugee question is concerned, the main line of work for the EU continues to be finding agreements with countries of origin and transit.

What is particularly disappointing is the chapter dedicated to the internal dimension. Just four dry lines to disguise the fact that, in spite of the extreme urgency of the review of the Common European Asylum System, there is still no broad agreement even on what responsibility and solidarity should indeed imply (as different and creative interpretations of a simple and meaningful word, such as solidarity, are flourishing across Europe). Furthermore not a single word is dedicated to the still languishing relocation scheme, which even if in the last month has seen some countries improve their performance, so far has managed to ensure the relocation of only about 5% of the 160,000 people it aimed at.

Against a backdrop of rising and diversifying security threats, as well as a spectrum of international political uncertainty that have placed security and defence at the forefront of the EU’s agenda, heads of state or government at the December 2016 European Council were presented with a comprehensive defence package by High Representative/Vice President (HR/VP), Federica Mogherini, aimed at boosting security of the Union and its citizens.

The package’s three primary components build upon a number of key themes contained in the ambitious agenda set out in EU Global Strategy (EUGS) document, where it is clearly stipulated that ‘Member States will need to move towards defence cooperation as the norm’.

On The Security and Defence Implementation Plan (SDIP)

Linked to other strands of work concerning the implementation of the EUGS, this Plan had already been presented to EU Foreign Affairs and Defence Ministers on 14th November 2016, and a decision had been reached regarding a new level of ambition that is needed in security and defence policy. SDIP outlines 13 specific proposals for action in order to fulfill this ambition and achieve the EU’s full potential in 1) responding to external conflicts and crises when they arise, 2) building the capacities of partners, and 3) protecting the European Union and its citizens through external action. The European Council endorsed the Council conclusions of 14th November, calling for their comprehensive follow-up by the High Representative and Member States.

The second part of the defence package, the European Defence Action Plan, which is inter alia aimed at creating a European Defence Fund and improving Europe’s efficiency in defence research and spending, was first presented by the European Commission on 30th November 2016. The European Council welcomed these proposals by the Commission, crucially inviting the latter to make proposals in the first semester of 2017 for the establishment of this Fund including a window on the joint development of capabilities commonly agreed by the Member States.

Earlier this month, the Council of the EU adopted conclusions on the implementation of the EU-NATO Joint Declaration, signed at the July 2016 NATO Summit in Warsaw. This decision endorsed 42 concrete action-oriented deliverables covering seven areas identified as of key importance, presented on 15th November by the HR/VP and NATO’s Secretary-General Jens Stoltenberg, with a view to enhancing the cooperation between the two organisations. Realising the urgent need to address the fraught security climate that exists within Europe and beyond European borders, the European Council also urged swift action to follow up in this area.

Taken together, these three strands of the defence package provide a small yet encouraging step towards the goal of enhancing coordination and integration in security and defence policy at EU level, so as to better meet current and future security challenges. The nature of the package’s three initiatives and the language underpinning them reveal a deep realisation not only of the need for the Union to move in this direction, but also of the dividing lines that exist among Member States over what EU defence policy is and is not, and what it should be and should not be. The European Council conclusions also mention a review of progress on all three components in March 2017. This review will provide a crucial first test of whether the EU can move towards a more responsive and ultimately more effective security and defence policy, given the necessary balancing act between the need to be inclusive and ambitious at the same time.

In an attempt to accommodate the outcome of the vote of the Dutch people in the April 2016 referendum, Heads of State or Government struck a compromise deal vis-à-vis the EU’s pending Association Agreement with Ukraine. In the conclusions adopted, there are clear references to a ‘legally binding’ decision, as per the request of the Dutch Prime Minister, Mark Rutte, that ‘does not confer on Ukraine the status of a candidate country for accession to the Union, nor does it constitute a commitment to confer such status to Ukraine in the future’. The expectation now is that these provisions, in addition to the stipulation that this Agreement does ‘not contain an obligation for the Union or its Member States to provide collective security guarantees or other military aid or assistance to Ukraine’, will allow the Netherlands to become the final EU nation to ratify it.

After the recent tragic developments in the country, the issue of Syria was discussed during the European Council, featuring the extraordinary participation of Brita Hagi Hasan, the president of the Aleppo city council, in part of the proceedings. Following HR/VP Federica Mogherini’s declaration on the same issue earlier this month, the European Council strongly condemned ‘the continued assault on Aleppo by the Syrian regime and its allies, notably Russia and Iran, including the deliberate targeting of civilians and hospitals’. This condemnation was crucially not accompanied by a decision for additional sanctions against Russia, but with an urgent call for Moscow and the Syrian regime inter alia to respect international humanitarian law, provide unconditional aid and protection for all civilians, and guarantee the immediate opening of humanitarian corridors.

On the European Fund for Strategic Investment (EFSI)

We welcome the conclusions reached by the Council to extend both the duration and financial capacity of EFSI, one of the few available counter-cyclical levers to stimulate growth and investment across the EU. FEPS has, for a long time, been a keen supporter of an investment-led recovery and an eager advocate of using policy tools mediated via EIB. Although not explicitly mentioned in the conclusions, to reach the presumed multiplier effect (of 1:15) given the increase in the overall investment target [2], a prolongation of the accommodative monetary policy stance is highly needed, with ample liquidity provisions to EU banks, progress of the Banking Union and Capital Market Union (CMU) initiatives. FEPS has been an active partner in policy debates on the CMU [3]. Debates have tackled an important question and a paradox at the same time: a world structurally awash in excess capital that does not make its way into long-term productive investment. It goes without saying that solving this paradox would require, besides an active policy agenda, a strong leadership to ease the high policy uncertainty we are witnessing today across much of the EU28 (pre- and post-Brexit).

[1] Ethiopia, Mali, Niger, Nigeria and Senegal.
[2] In a comparative perspective, the new agreed investment target of “at least half trillion euros of investment” is more than 50% higher than the old one of “315 billion of additional investment”.
[3] See project’s page here.