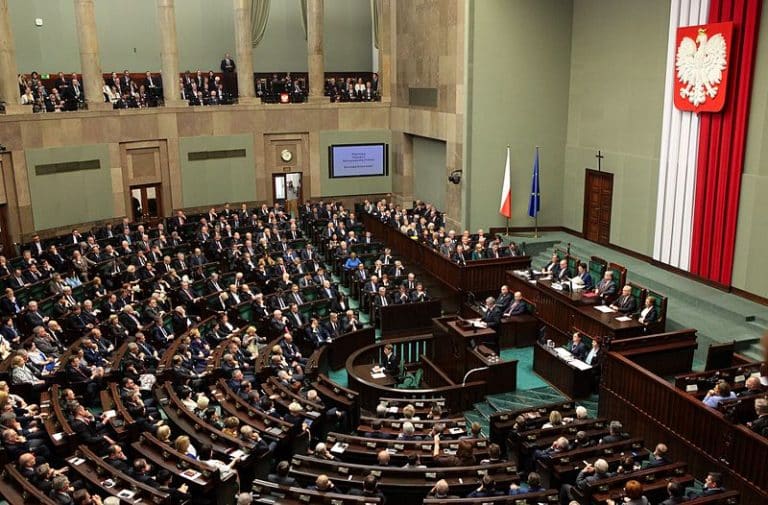 2015 brought significant political changes to Poland. It proved to be a great election comeback by the Law and Justice Party (PiS) which was founded by the Kaczyński brothers, one of whom died in the Smoleńsk air crash in 2010. On the other side, Civic Platform (PO), founded by Donald Tusk, which ruled the country for 8 years, suffered a bitter defeat. Their junior coalition partner barely made it to the parliament. The Democratic Left Alliance (SLD) in turn failed completely, and are left for the first time without any parliamentary representation. Meanwhile, three new political players entered the fray, offering voters a new liberal alternative (Nowoczesna), a nationalist-populist coalition (Kukiz 15) and a social left wing party much inspired by Syriza and Podemos (RAZEM). As a result, new faces have appeared as nearly half of the 460 Members of the Parliament (MPs) are new. Nevertheless, this refreshing change did not prevent the monopolisation of political power: after 10 years in opposition, PiS won the most seats in both chambers of the Polish parliament. Given the party-affiliated president and authoritarian party structure, this gives leader Jarosław Kaczyński – a regular MP with immense behind-the-scenes influence – extensive power.

PiS immediately brought into effect its long promised program. The newly introduced media laws gave the government power to appoint heads of public TV and radio. Changing the rules of the Constitutional Tribunal resulted in its paralysis, which persists today. The office of attorney general was merged with the ministry of justice, politicizing the former. Planned amendments in appointing judges were met with abrupt protest against dismantling the tripartite division of powers. In the public sector not only systemic, but also significant, personnel changes were introduced. Drawing from the Hungarian experience, Jarosław Kaczyński is currently sounding out a possible electoral reform to safeguard the allocation of votes favourable to his party. PiS also solemnly fulfilled its generous social promises by introducing child benefits, lowering the retirement age, and increasing the income-tax-free threshold. Educational reform followed, shifting the compulsory school age back to 7 years and re-introducing the late selection model (long primary education). A conservative backlash to these measures became evident when lawmakers tried to push ahead with a near-total ban on abortion, and put the Convention on preventing and combating violence against women into question. A new approach is also noticeable in the country’s foreign policy. Poland found itself openly challenging the European Union, first when confronting charges about the rule of law violations, then by dreaming of a Visegrad Group consolidation, if not restoring the legendary Intermarium. Poland also poorly invested resources by seeking a Western ally in the United Kingdom just before Brexit. Faith in the new US president, Donald Trump, fades when confronted with his alleged close ties to Vladimir Putin. Short-sightedly, Poland also distanced itself from Germany, the only country in Western Europe that still seems to trust in dialogue with its neighbour.

The victory and prompt actions of the PiS party mobilised opposition. A Committee for the Defence of Democracy (KOD) was formed immediately – a movement with country-wide structures, supported by public figures, prominent politicians and opposition party leaders, led by a charismatic but formerly unknown leader, Mateusz Kijowski. KOD moved people onto the streets by taking a stand anytime the government passed controversial reforms. As time went by, more and more conflicts grew inside KOD. These escalated when it was revealed that the leader commissioned IT services to his own company, leaving many KOD adherents in denial. Another strong resistance arose around the issue of reproductive rights. So called ‘Black Protests’ against the abortion ban gathered crowds of an estimated 150,000 protesting in the streets. Celebrating massive mobilisation, little did the organisers know that the movement would soon be challenged by internal divisions as protesting against a complete ban on abortion was not synonymous with advocating unlimited access to it. Nevertheless, the women’s march remained not only the biggest, but also the most effective initiative. Other single cause movements failed, like the teachers’ objection to the education reform or the fight of the ecologists against loggings in primeval forests. So too did the occupation of Sejm, organized by the opposition MPs after limiting access of the media to the plenary. Spectacular as it was, the strike proved futile, providing PiS with even more arguments about alleged sabotage intentions of the opposition.

Meanwhile, alongside human rights pro-choice circles, the far right scene is rising, triggered by the “refugee crisis” and tolerated by the authorities. PiS also enjoys public support as manifested during monthly commemorations of the Smoleńsk catastrophe. The indirect but clear endorsement by the Polish Catholic church lends further support. The governing party continuously leads in the polls leaving all rivals behind, president Andrzej Duda and Prime Minister Beata Szydło being the most trusted politicians. At the present time there is no one capable of posing a threat to Jarosław Kaczyński. He can always count on the exotic national-populists formation in Sejm to deliver the votes necessary to pass controversial laws. The opposition is weak and fragmented. New (neo)liberals under Ryszard Petru cannibalised the old formation of Donald Tusk. The progressive camp is in pieces. The Social Democratic Alliance, a party once in power, lost its impetus and recognizable members. In the presidential election in May 2015 it seriously undermined its credibility by choosing a candidate politically unexperienced and unknown to the public. Few months later, for the purpose of parliamentary elections, SLD built up a centre-left coalition, trying to win the votes with a dull prophecy of Parliament without progressives, instead of any coherent programme. The new left, RAZEM, dynamically builds its structures but it remains under the electoral threshold, being unlikely to play a major role in country politics. The third player, feminist leader Barbara Nowacka, attracted media attention as a rising hope for Poland but her association, Inicjatywa Polska, lacks local structures and a coherent agenda.

Today it seems that the future of PiS in Poland is secure. On the one hand, so far no constructive mobilisation against the mighty national-conservatives seems possible. The Law and Justice party is not strong enough to completely dismantle Polish democracy, as it is incapable of amending the constitution, but it doesn’t give up endeavours to petrify its position by fiddling with the judiciary system, electoral laws or replacing former staff in public service. It is worth mentioning that PiS had already once been in power in 2006, however they lost it after two years of turbulent governance. Therefore, their determination is even stronger to not make that mistake again. The most possible scenario is that the government will continue to strengthen the party’s power position, both in terms of building hierarchical dependencies and introducing structural changes in order to be ready to face its rivals not only in 2019, by the next parliamentary elections, but also at the local level in 2018. One of course could imagine that the bold actions of PiS government rouse general public discontent. Yet, Poland is a country of weak civic engagement, reflected not only by relative high score of power distance: accepting hierarchical order and status inequalities, but also low voter turnout, hardly exceeding 50% of all eligible voters. This indifference is surely a big ally of PiS.