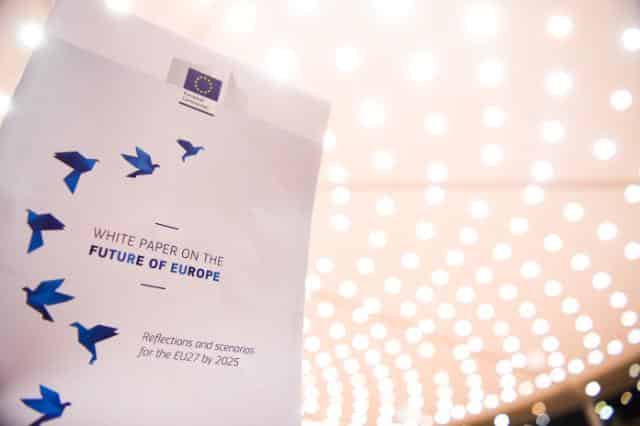 On Wednesday 1st March 2017, European Commission President Jean-Claude Juncker presented his ‘White Paper’ on the future of Europe to the European Parliament in Brussels. The White Paper presents a range of scenarios for how the European Union could evolve within the next decade(s). ‘What future do we want for ourselves, for our children and for the Union?’ Juncker asks, refraining from presenting any definitive decisions but explicitly opening a democratic debate on how we, as Europeans, would like to shape our own political destiny. Juncker’s idea behind the White Paper is that by the time the European Parliament elections take place in June 2019, European citizens will be able to vote for their preferred version of the union.

The White Paper is also intended to give EU leaders food for thought when they meet in Rome on 25th March to commemorate 60 years of the signing of the Treaty of Rome. The Commission proposes five scenarios for a Europe of the 27 which range from reducing the union to a single market all the way to strengthened integration, because in spite of Brexit ‘we will continue, we have to continue’, as Juncker put it in his speech.

Juncker immediately rejects the ‘nothing but the single market’ scenario, saying the European Union is about more than just markets, products and money. In a second scenario Member States would either ‘carry on’ by strengthening its single market and negotiating trade agreements for its Member States, or only a group of willing Member States continues to more fully integrate their cooperation whereas the rest is free to stay behind. Following the slogan ‘doing more with less’, yet another scenario for the future of Europe would allow for Member States to strengthen their cooperation in policy areas with tangible benefits to its citizens, while doing less in others. Examples include a European Counter-terrorism Agency or a European Agency to combat fraud such as the scandal over emissions cheating. We do not have to read between the lines to understand that this is Juncker’s preferred scenario. In a fifth scenario, a ‘European Union at full speed’, Member States would cooperate more strongly across all policy areas, reinforcing the leadership role of the European Union on climate change, sustainable development, a common foreign and defense policy and a fully integrated single market.

So where does the Commission White Paper leave us on the future of Europe? By presenting reflections and scenarios, the Commission has regrettably not provided a clear political vision for Europe. Far from the ‘political Commission’ Juncker praised when taking office, the Commission is not exactly embracing its right of initiative to propose new laws with this White Paper which does not really qualify as a blueprint for legislative action. Although Juncker references the acceptance speech of Germany’s President Elect Frank-Walter Steinmeier, saying that ‘to encourage others we must be brave ourselves’, the Commission’s strategy to offer various scenarios with no real commitment to a strong European Union is not actually very brave. Juncker’s emotional outpouring at the end of the presentation at the EP clearly shows that he is feeling political pressure to lead in times of crisis. Yet, instead of a clear roadmap for Europe’s recovery and political leadership, the Commission has presented a discussion paper with no real commitment to pave the way forward.

The cautious approach of the European Commission might be an effort to appease rising populism across Europe and beyond. With two major national elections coming up in 2017 in France and Germany, a more optimistic scenario would also be possible. With Germany’s social democratic candidate, and former President of the European Parliament, Martin Schulz overtaking Chancellor Angela Merkel in the polls, France’s centre-right candidate François Fillon under formal investigation (and probably not in the second round) and the center left’s candidate Emmanuel Macron as a possible elected president and an outspoken pro-European, the elections could revive the German-Franco couple as a major engine of a deeper European integration and a more social Europe. Without clear political leadership of the Commission, it will be difficult to keep this engine running.