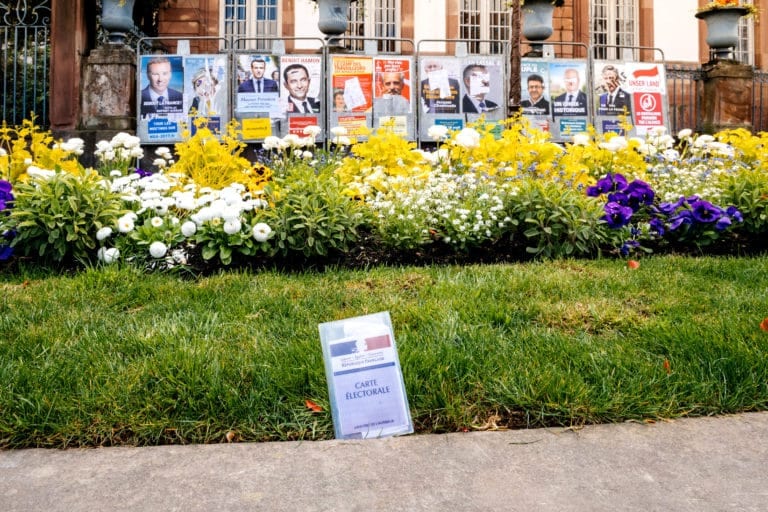 Cut into four. Divided, fractured. Frédéric Dabi, Deputy Director General of Ifop, and Chloé Morin, Director of the Opinion Observatory of the Foundation, offer an analysis of France in the first round of the 2017 presidential election.

France woke up on the morning after this first presidential round a bit En Marche, a bit rebellious, a bit angry and a bit nostalgic. And entirely disoriented, not yet daring to know what to expect from the new political order to which she had just given birth.

No surprise – the final duel was predicted long ago by the pre-election polls, for example the Rolling Ifop-Fiducial – but there is still a bitter taste, a feeling of leaping into the unknown – for the best … ?

The two most feared second-round scenarios have now been put to rest: no duel between Marine Le Pen and Jean-Luc Mélenchon, nor a confrontation between François Fillon and Marine Le Pen. Scenarios feared by nearly half of the French electorate (OpinionWay poll for the Jean-Jaurès Foundation).

Guided by the desire to finally free themselves from the present mass unemployment (69% first reason for voting according to the poll “Day of the vote” from Ifop for Paris Match, CNews and Sud Radio), which has been undermining us for too long, and by the desire to protect ourselves from a terrorist threat (66%), which resurfaced during the last week of the campaign (but only changed the vote by 4%, two times less than in the last regional elections), the French went to the polls. In large numbers. Contrary to all those who predicted record abstention, our fellow citizens showed that despite a campaign often described as unsatisfactory – but in the end more interesting than in 2012, as 72% found it interesting retrospectively, compared to 52% in 2012 – they are not ready to allow any one person to decide their fate for them.

Their vote bears witness to a clear division, which breaks France in two, indeed tears it into four. In two, between those who consider themselves to be winners from globalisation and who tended to vote for Emmanuel Macron or François Fillon, and those who claim to be the victims and who massively voted for Marine Le Pen and Jean-Luc Mélenchon. But more particularly into four, with four different visions of how to make a better future for oneself and one’s children, each with almost the same proportion of the vote.

At the start of the second round of the presidential campaign and in expectation of a more uncertain Parliamentary election than the previous ones, given the decomposition/re-composition of the political field, these four options will ultimately be hard to reconcile.

In one corner, a France which has voted for a better life, health and purchasing power, safeguarding public services, fighting precariousness and protecting the environment. This France of Jean-Luc Mélenchon – a candidate whom all voters from the left and beyond it acknowledge to have fought the best campaign – sought, like the others, a clear break with the status quo. Or indeed to turn the world upside down, to bring about the “overthrow” advocated by its champion in meeting after meeting.

But it also wanted, and may be more than the others, empathy, a president listening to its problems and its anxieties. This France is similar in some respects to that of Marine Le Pen: it has only 12% of the total population over 65, compared to 56% of the population aged 35-64. It is composed only 13% of CSP+, as against 33% of CSP- (the demographic categories in which Jean-Luc Mélenchon had collected only 14% of the votes in 2012). This electorate of rebellious France also had a significant proportion of people with a final qualification below the baccalaureate level – though this category is even more prominent in the electorate of Marine Le Pen (30% vs. 45%). A quarter of Jean-Luc Mélenchon’s voters, compared with nearly a third of those of Marine Le Pen, live in rural areas. 56% (compared with 58%) live in urban municipalities in the provinces … The similarities are numerous, except that the France of Marine Le Pen is firmly anchored in the Front National and to a lesser extent on the right (68% and 11%), while the vast majority of Jean Luc Mélenchon’s voters declared themselves to be left-leaning (76% of his voters). The two candidates who, each in their own way, are seeking to free themselves from the left-right divide, ultimately have very few voters who are truly “without partisan sympathy”: 16% of Jean-Luc Mélenchon’s voters and 14% of Marine Le Pen’s voters.

In another corner, there is a France which has prioritised in its voting motivations the fight against terrorism and crime, the fight against illegal immigration, the control of taxes and the reduction of the debt. In addition, François Fillon’s France sought to improve its situation – the “country’s recovery” on which the candidate campaigned – and the proper business of a President of the Republic. 45% of the electorate of François Fillon is over 65, and only 13% is under 35. Only 37.6% are “active”, compared with more than 52% of pensioners. The weakness of François Fillon among the lower demographic categories is clear: less than 10% of the voters for the candidate of the right are white-collar, and less than 4% are blue-collar. It is a France of the urban municipalities of the provinces (where 60% of its voters live), often qualified or even highly qualified (50% of this electorate is composed of graduates), often pretty well off. A France which essentially voted for Nicolas Sarkozy in 2012 (70% of the electors of François Fillon).

The France of Marine Le Pen has prioritised its security against terrorism and crime, has shouted its desire to close borders to immigration, but also to regain purchasing power through the “national priority” advocated by the FN candidate. These voters also wanted a change candidate, one able to improve their situation and understand the problems that undermine their daily lives. More than 50% of the electorate of Marine Le Pen is composed of people belonging to the lower demographic categories. Nearly 60% of her electors are in the 35-64 age group. Her electorate has the highest proportion of inhabitants in rural areas (31%). Finally, 45% of the people who put a FN ballot in the urn this Sunday have qualifications below the baccalauréat level.

Finally, there is a more optimistic France, expecting a better life – unemployment, health, education – for it and its children, but also and above all the renewal and moral reform of public life. A France less worried by its purchasing power, by immigration or by insecurity on a daily basis than the average French person. This France which voted for Emmanuel Macron seems to want to escape the generational war by which the French political landscape is more and more stamped. This is evidenced by the age structure of the Macron vote, which is very “balanced”: there are as many young people as there are pensioners or people of working age. However, it is more urban (with 26% of Parisians, compared to 21% in rural areas), more integrated in the labour market and more affluent (31% of CSPs+, of which 36% are executives, as against 19% of CSP-). Finally, two-thirds of the electors of Emmanuel Macron turn out to be left-wing sympathisers. 45% of those who voted for him this Sunday had put a Hollande ballot in the ballot box in the first round of the previous presidential election, 16% had voted for François Bayrou and 17% had voted for Nicolas Sarkozy. In this respect, it should be noted that the ability of candidate Macron to capture a significant part of this right-wing electorate underlines, by contrast, Francois Fillon’s difficulty in bringing together this Sarkozy electorate which is not so much hidden as dispersed.

It is to be noted that Jean-Luc Mélenchon got himself involved, at the end of the campaign, in the battle for the “France of work”[1]. In the case of blue-collar (23, 24, 23%), white-collar (23, 25, 23) and 35-64 year olds (21, 24, 23), the candidate of rebellious France managed to be almost neck and neck with the candidate from the Front National and Emmanuel Macron. “Active” France is thus cut in three, although its least well-off sections remain massively oriented towards Marine Le Pen (34% of the CSP-) and Jean-Luc Mélenchon (25%), whereas the better off favour Emmanuel Macron (31%).

From these four Frances, the future president of the Republic has the heavy task of making only one. Of calming, reconciling and restoring confidence in order to pull together a country which has doubted itself for too long. This will not be easy, as each electoral bloc seems defiant against the three major candidates on which each France has turned its back, a posture that may foretell a high level of abstention on 7 May. For Emmanuel Macron, whom most voting intentions predict to win at the end of the second round, the hard work starts now. We would bet that the enthusiasm of the first steps – limited to his core supporters – will soon give way, in a context where any notion of a state of grace has simply disappeared, to a sense of expectation which is initially friendly but which wants definite actions. For one thing is certain: the rejection of Marine Le Pen will not suffice – will not suffice any more – to unite the country the day after the second round. Still less to govern it for the next five years.

Read this article in French