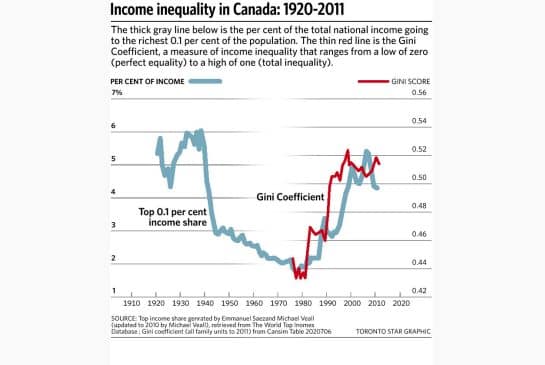 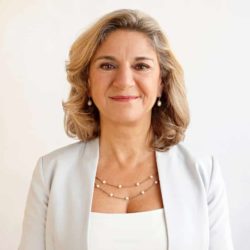 How to reduce inequality
There are three ways to tackle inequality. The first uses the job market itself to minimize income disparities through high minimum and/or living wages, robust trade union density, full employment of human resources, cultural constraints on excessive CEO compensation and limited use of migrant workers. The second redistributes income by governments, with progressive taxation that sets higher rates on higher incomes while providing transfers and supports to lower-income, unemployed, disabled and elderly citizens. Finally, inequality can be reduced by promoting meritocracy and mobility through investments in healthcare and education, affordable housing and transit.

How not to reduce inequality
Markets don’t just happen. Governments shape them by writing the rules of the game. The rules are gradually being rewritten to favour ownership and those with power. Trade agreements, such as the Trans-Pacific Partnership and the Canada-Europe Comprehensive Economic and Trade Agreement are poised to deepen the reach of existing trade deals, further liberalizing capital while constraining labour and sovereign decision-making.

Europe’s long-standing pursuit of greater equality has emphasized generous childcare provisions and educational spending, not tax cuts and credits. But since the 2008 crisis, Europe’s focus on equality has been undermined. As youth unemployment soars, governments have focused on balancing their books via spending cuts. The cure has proven worse than the disease. Austerity’s government cutbacks drag already weak private-sector growth towards recession and strain political consensus. In Europe, as in Canada, inter-generational solidarity is at risk. Recent policy reforms favour those with wealth (older people) over those starting out (the young).

We know how to reduce inequality, but five emerging trends undermine progress. The first: tax cuts that treat income from capital more preferentially than income from work. The second: systematic undermining of unions and collective bargaining, which has historically offered a negotiated path for sharing prosperity. The third: devotion to balanced budgets and austerity, a perverse focus in an era of historically low interest rates which could spur state investment in infrastructure, boosting current growth and future potential. Fourth: accelerating use and abuse of migrant workers, as industrialized nations face the twin challenges of slow growth and aging populations. Finally: trade agreements that further shift bargaining power towards corporations, ultimately eroding the prosperity of most citizens. Sold as ways to put more money in our pockets, these false economies pit us as consumers against ourselves as workers and citizens, and make inequality worse.