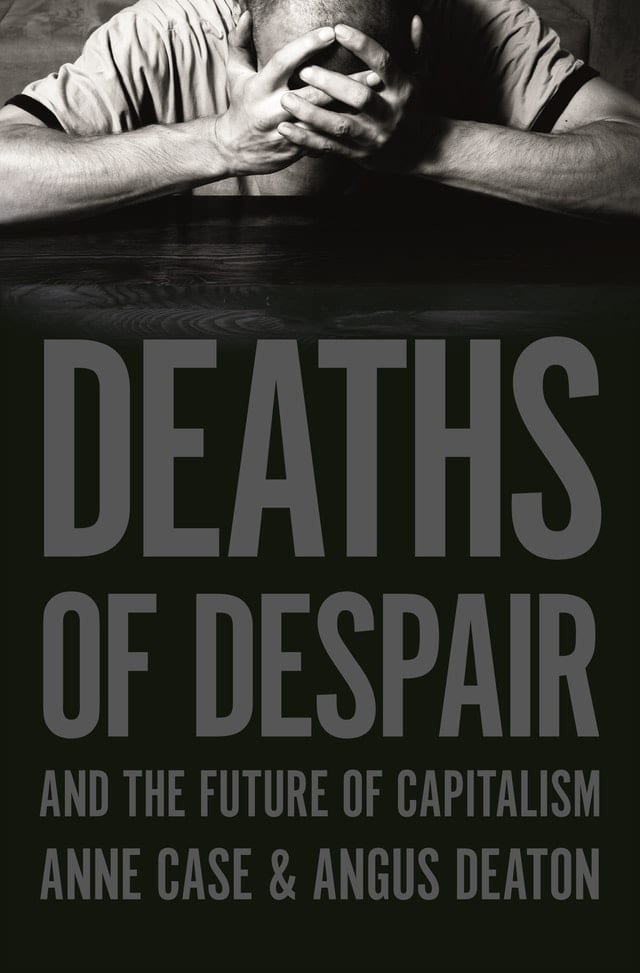 The slow extinction of the American working class

Popular predictions about the political extinction of the working class were gross overgeneralisations. However, workers face a more direct, biological threat: Deaths of Despair and the Future of Capitalism. Anne Case and her Nobel-laurate husband, Angus Deaton, tackle in their latest book the loss of stable jobs, the rise of inequality, the stagnation of the real wage, and the commodified health care has led to the steady decline of workers’ life expectancy in the United States since the 2000s.

The economist and philosopher Amartya Sen has stated already back in the 1990s that life expectancy and mortality are much better indicators of developmentthan GDP. Life expectancy had been increasing throughout most of the 20thcentury in the US and Europe, which is the most robust sign of the benefits brought by developments in health care, the welfare state and economic growth. However, today, the world’s most powerful economy is experiencing a completely different trend that fundamentally questions the functionality of the US growth model. The mortality of middle-aged white Americans has been increasing since the turn of the Millennium.

As the two Princeton economists Case and Deaton highlight in their book, ‘deaths of despair’ killed 158,000 Americans during 2017, which is equivalent to a packed Boing 737 falling from the sky each day for a year – 20,000 more than the number of Americans died due to COVID-19 until 5 July 2020. There will likely be an effective serum against COVID-19, people dying from deaths of despair however have little hope for a quick fix. The corona-crisis ushered in a horrible humanitarian crisis, but it hit the US at the peak of an even deadlier, though less visible, health crisis unfolding for twenty years already.

A few years before the onset of declining life expectancy in the US, Eastern Europe experienced an even worse mortality catastrophe whose magnitude was unprecedented in peace times in the developed world. The postsocialist mortality crisis – the topic of my PhD thesisand several subsequentjournal articles– was also connected to the rapid changes that transformed Eastern Europe’s industrial and employment structure. Privatisation, deindustrialisation and labour market upheaval were among the prime upstream political-economic determinants of the postsocialist mortality crisis. However, life expectancy has started to rise again in Eastern Europe from the second half of the 1990s. The mortality of White Americans has been increasing for twenty years.

Black Americans still have higher mortality rates than whites. A recent study reportedthat the mortality rate of Black Americans due to the COVID-19 was 61.6 people per 100,000 (adjusted for age) between 13 April and 7 July 2020. This rate is three times higher than the 26.2 per 100,000 for whites. The corona pandemic has shed light on the profound institutional and structural injustices that depress the life chances of Black Americans. Despite the differences in absolute levels, the trends show a declining gap, which in theory should be good news, except that it is driven by the declining life expectancy of White Americans and not the rapid improvement of the health of blacks.

The three direct causes of this mortality wave in the US are suicides, drug overdose, and alcohol-related deaths. These are what Case and Deaton call the “deaths of despair.” According to the authors, they reflect how people feel about their future and value their lives. In the case of suicide, the link between despair and death is direct. In the case of alcohol- and drug-related deaths, this association is indirect. As the figure belowshows, the deaths of despair have been rising steeply since 2000 among White non-Hispanic Americans (WNHs) between 50 and 54 years of age.

Case and Deaton were not the first to highlight the relationship between socio-economic structures and health. In August 1980, the United Kingdom Department of Health and Social Security published the Report of the Working Group on Inequalities in Health, also known as the Black Report. The study showed widening inequalities in ill-health and death. However, the political climate in 1980-Britain was very different, and the health department buried the report. Since then, due to the work of such researchers as Kate Pickett, Richard Wilkinson or Michael Marmot among others, the social determinants of health have received widespread attention both by the public health community, and increasingly, the wider public. Social factors, such as status, psychosocial stress, inequality, unemployment, social exclusion, housing, or precarity, have a profound effect on individual health behaviour.

Case and Deaton build on this tradition of public health scholarship. Concerning alcohol-related deaths, they draw attention to binge drinking. Binge drinking – heavy episodic drinking – is not just related to adolescent social life but has also become a prevalent form of stress coping. However, it is a very destructive form of coping, associated with various chronic health problems – cardiovascular diseases, strokes, infarction, mental health problems – and also increase the risk of alcohol poisoning and traffic accidents. Drinking in response to increased social stress was the primary direct cause also behind the postsocialist mortality crisis, driven by upstream economic determinants such as rapid privatisation.

One of the most shocking chapters of the book deals with the opioid epidemic. The prime culprits here are not illegal opioids such as heroin but legal opioids, prescription drugs such as the painkillers OxyContin or Vicodin. In the last three decades, the US saw tectonic shifts in the sphere of pain medication, leading to the introduction of powerful new drugs that lent themselves easily to misuse. A whole industry of prescription drug misuse evolved, involving doctors, pharmaceuticals, and drug traders to increase to supply of these drugs beyond the legal boundaries. Roughly 21-29% of patients prescribed opioids for chronic pain misuse them– about 80% of people who use heroin first misused prescription opioids.

In 2017, overdose related to prescription opioids was responsible for a third of all opioid-related deaths in the US. Between 2000 and 2017, more American died because of prescription opioids than as a result of the two world wars. Case and Deaton highlight that drug manufacturers are aware of these problems but are often reluctant to change their practices to prevent abuses. Due to their political power, they are also effective in blocking new regulations.

The fall of the working class

One of the most important arguments of Case and Deaton is that deaths of despair are not distributed equally in society. The increase of the deaths of despair is confined to workers without college or university degree. The social dislocation of the American working class is the most crucial background factor.

Education has become a critical marker of social class. Case and Deaton show that the real wage of workers without a college degree has declined by 13% between 1979 and 2017. In the 1970s, those with a college or university degree earned on average 40% more than workers without a college degree. By the 2000s, this gap had doubled to 80%. Chances of unemployment and finding a new job are also increasingly linked to poor education.

Case and Deaton focus on the white working class because this is the group driving the upward trend of the deaths of despair. However, black workers experienced a similar health crisis in the 1980s, as they were the first ones hit by the same wave of deindustrialisationthat later started to drive up the death rate of white workers also.

The loss of stable industrial jobs has profoundly reshaped the fabric of communities and torn apart working-class culture, both black and white. The towns that previously were the regional backbones of the blue-collar, working-class aristocracy are today homes of interlaced social, economic and health problems – homes of despair. The deindustrialisation of the American rust beltnot only drives the disintegration of the working class but also leads to the rise of acute psychosocial stress and hopelessness. This context is a fertile breeding ground for emotional and mental disorders that often translate into other health problems and addictions over time.

It is thus no surprise that people left behind in regions with accumulating economic and health problems are the prime voter base of the nationalist alt-right that sells anti-status quo politics. This economic upheaval also makes people living in left-behind rust belt areas an easy prey of the ‘reindustrialisation romantics’ that were a backbone of Trump’s 2016 campaign, and are frequent topics of national-populists in Europe also. Regional death rates were strong predictors of Trump’s electoral successin 2016 and the Brexit votein the UK. Increased working-class deaths rates thus not only signal the failure of economic development but also the ill health of democracies.

Deindustrialisation has wiped out millions of stable American jobs. In theory, the rise of new jobs in services or high-tech industries could offset this. However, successful tech sectors are typically far away from the rust belt. The concentration of globally competitive new industries in coastal metropolitan areas has also led to a steep rise of housing costs. These trends make regional labour market mobility difficult. An unemployed ex-miner in West Virginia or a jobless plant worker in Detroit has little chance to move to San Francisco or to find a new job in the Silicon Valley. It is much likelier that they either stay unemployed or find new jobs in regional service sectors – outposts of the “gig economy”, warehouses or delivery services, which provide much more precarious labour conditions than former industrial plants.

The second most important economic determinant of the health crisis lies in the weakness of the American welfare state, the market-based health system and the oligarchic political system that allows too much space for private interest groups, such as pharmaceutical lobbying. The world has learned a lot about the problems of the US health care system during the corona crisis. But the problem lies not only in the 30 million uninsured Americans. The US health care system is the most expensive in the world. As Case and Deaton highlight, these costs represent a burden on American wages and weaken the economy.

Case and Deaton close the book with a battery of proposals. These range from suggestions such as better education, better regulatory oversight over pharma companies to more profound proposals, such as introducing universal health insurance and improving the bargaining power of workers. Although their recommendations are not well-elaborated and might struck the reader as insufficientcompared to the gravity of the problem, this does not diminish the revelatory power of the book. If you want to understand the human dimension of contemporary American capitalism and the decline of the working class, then look no further.