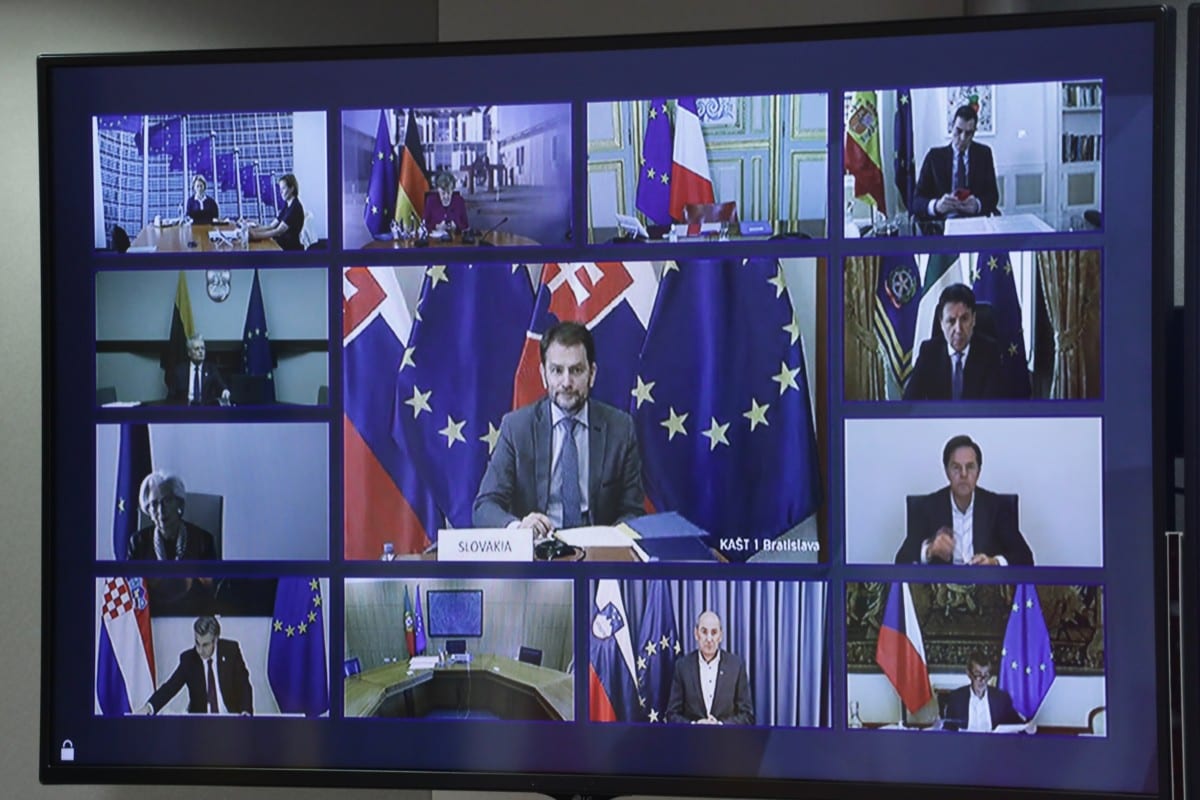 The European Council in face of historical responsibilities. It seems like the European Council started realising the real scope of this crisis. This is not only a daunting health threat taking everyone by surprise, this is bringing the deepest economic slump in the last ninety years and which will magnify all pre-existing national, regional, and social inequalities. Some still think they might somehow escape this wave, but this seems to be a big illusion because the downward spiral of many will bring all the others along. So, what should be done when such a tornado is appearing on the horizon?

The instinct of survival drove most countries to launch first fiscal packages to keep companies and jobs afloat, counting on a temporary relaxation of the Stability and Growth Pact and of the EU State aid rules. Afterwards, the Eurogroup was quicker than usual to adopt a rescue package to deal with the emergency of saving lives and jobs. It was accepted to drop the usual conditionalities of the European Stability Mechanism when dealing with the direct and indirect expenditures to counter the Covid19 health impact, the European Investment Bank (EIB) was asked to lend more to SMEs and – the most promising innovation! – a new Community instrument, the Support to mitigate Unemployment Risks in an Emergency (SURE), was created to stop job destruction by supporting short-time work arrangements.

A new step was now taken by the European Council meeting this Thursday, after a European Parliament plenary, willing to address not only the emergency phase of the Covid19 crisis but also the urgent phase of countering the economic shock with a plan for recovery. Hence, it was decided to create a European Recovery Fund as a complement to the European budget which shall be financed with the issuance of bonds by an instrument to be managed by the European Commission.

This means that two important developments took place which might unblock some decades-old EU taboos. The first is about the need for a bigger EU budget, the second one is about the need of financing it with the issuance of a particular kind of European bonds. Make no mistake though, we are not speaking here about the previously advocated “corona bonds”, involving the joint issuance of bonds to finance national budgets and reducing their past debts. We are speaking about mutualising the finance of future spending at European level, to be framed by the European budget. That said, these are important developments which still need to be confirmed and, as always, the devil will be in the details.

““Recovery” should not be about restoring and coming back to the past, it should rather be about relaunching while transforming our future.“

Nevertheless, there are several other critical issues that remain to be answered and which will decide if we are going down a path of fragmentation, decline and international irrelevance or if there is a chance of relaunching the European project with a bold and visionary plan of reconstruction of the European economies and societies. In fact, “Recovery” should not be about restoring and coming back to the past, it should rather be about relaunching while transforming our future.

The first critical issue will about the size of this European stimulus package. When the ECB forecasts are about a fall of 15% in EU GDP against the 5% during the big financial crisis in the last decade,its total size should not be below 2 Trillion Euros.

The second critical issue is about the content of this package, and the vision driving it: do we just want to restore the past concept of prosperity? Or do we want to rebuild our well-being basis, forging a new relationship with the planet and the nature for a real healthy life, counting not only with stronger health systems but also on a new way of life when it comes transports, housing, food, manufactured goods and energy? From this view-point, the recent large-scale experience of saving lives and saving jobs by going digital and low-carbon can bring many useful (positive and negative) lessons for the future. In fact, this is not the moment to forget about the Green Deal and the digital transition, this the moment to make the best of this combination to create a new generation of jobs.

“The real sound and forward-looking solution is to raise the EU own resources ceiling with new sources of taxation such as carbon, financial transaction, wealth and digital taxation.”

Nevertheless, this big transformation can only succeed if the different countries, groups of citizens, different generations, men and women can take part of it and not being excluded by it. Hence, this European Recovery Plan must be designed as part of a real European budgetary capacity with the objectives of promoting forward-looking investment and jobs, supporting economic, social, and territorial cohesion, and rebuilding strategic supply chains involving all EU Member States.

And a real budgetary capacity is based – everywhere in the world – not only on facilitating loans but also on providing grants. This is already the case in many programmes of the current Community budget and should also be the case for a future Recovery Fund if we want to prevent widening divergences in the European Union. Otherwise, anti-European and nationalist political forces will certainly get an exceptional bonus for a forceful offensive in several countries.

Another critical issue will be on the European political table. If the European budgetary capacity is to be financed by a European issuance of bonds, how should the service of this debt be covered? Raising some national contributions would be a possibility, and the fact that Germany, under Social-democratic influence, is considering this possibility is certainly a good signal. Nevertheless, the real sound and forward-looking solution is to raise the EU own resources ceiling with new sources of taxation such as carbon, financial transaction, wealth and digital taxation. What about starting with the taxation of the big digital platforms, which are by now making high extra-profits with the large-scale lockdown of workers, students, and citizens in the entire European single market?

All this is about an historical development which will be crucial to save the European Union. We need a leadership up to this task. But only a European citizens movement can make the critical difference for this to happen. This will be the biggest test to our democracies at national and European level.