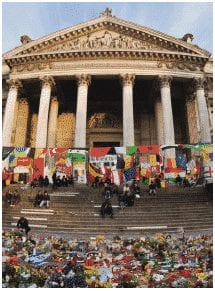 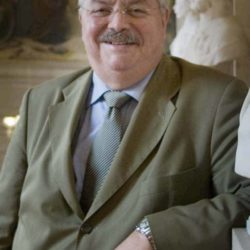 by Freddy Thielemans
Member of the Belgian socialist

Were you surprised by these attacks?
We must stop believing that this phenomenon is new. France, Belgium, Italy, and Germany have experienced terrorism from the extreme left to the far right.
Can we compare these forms of political terrorism to current jihadi terrorism?

There is a common thread: it is the thought of one’s extesesntial rightousness, either at the religious level or at the level of philosophical thought, as some Marxists-Lenninists were at the time.

What is the responsibility of religion in these crimes?
Monotheistic religions are basically the problem because they are religions of revelation. God’s word is the truth even if “they”, “we”, “you” know that the text has been rewritten so many times we are not sure if the speech was bona fida. Truth be told, we must prevail – as we can see that all religions have gone through periods of terrorism.

Are there issues with Islam?
Today, Islam combines to me a number of problems. One, they are in states in total imbalance at the social level (ex. Syria, Iraq, Lebanon), or they are in a wealth that is due and not the result of work but of a geographical feature (eg the Gulf States).

Have we failed?
In my eyes, technical education is an important part which has been misused in the context of integration. If we are starting to educate people who are not finding jobs at the end of their studies, we have already failed! So my message is: invest more in education than in any other form, more than in the Coast Guard! And more specifically, invest in technical training, such as the CFA (work-linked training center) as it courses cover lucrative sectors such as the internet, welding, creation of drones, etc.
So what must we do?
We must abandon the idea that there is one truth even in politics, even in ideology. And this is the debate that will fix this!

The Islam he stands?
Today, Islam combines to me a number of problems. One, they are in states in total imbalance at the social level (ex. Syria, Iraq, Lebanon), or they are in a wealth that is due and not the result of work but of a geographical feature (eg the Gulf States). Finally, we were unable unlike other populations before, these people actually integrated into the overall structure even though Belgium has elected long Moroccan or Algerian origin.
This is a pattern of success these North African origin elected?
Yes we are very proud to Belgium because it is the beginning of an integration. But the real integration, it is done at two levels that fall within both education: learning through the school where we live and learn in school what we can do with his life.
Have we failed?
In my eyes, technical education is one of the branches, which has been misused in the context of integration. If we form people who are not working at the end of their studies, they are mistaken way! So my message is: invest more in education than in any other form, more than in the Coast Guard! And more specifically, invest in technical training as the CFA (alternating training center) as it concerns both sectors such as internet as welding or creating drone …
Models inspire you?
I am told that Finland is doing better but when I see what is happening in France, in Belgium – the country I know best – when I see what is happening in the English public system, it is next of the plate. When one is proud of his work, we have another vision of life even if there are exceptions as are, for example, doctors side jihadists.
Radicalism key engineers as indeed was the case for the World Trade Center?
There is an element that has been studied and should be taken into account: a form of lassitude settles over injustice. This is a debate we must have with Israel because it happens a time when it becomes more bearable. But trouble when disarmed, it is the reaction to this moment, going beyond what is theoretically unbearable. Unfortunately, we no longer reflected in the ras-le-bol.
How would you define education?
Education is knowing his past, understand the present and its future structure.
What do you think of the ghettos?
Theoretically Belgium ghettos less than France because the social was kept in the towns but we know that the forms have been created otherwise there would be no concentration as we know it. It is to fight but it’s not easy because there are fears of difference, of the unknown that sometimes seems as inscribed in the genes.
The left she has some responsibility?
The left would have to tackle these problems head-on body since we internationalisms and we say “God, nor Caesar, nor tribune.”
Why does the left does is it not?
The great difficulty is the confrontation between theoretical reflection when one is looking for an electorate. This is the problem faced by large parties of extreme left, theorizing so they are unable to enter the social strata. Only exceptions in Italy and France where they had internal debates like Gramsci.
They have a perverse next elections for parties?
Let’s say that I question the electoral positioning because it is dangerous. The other drama is being debated between politicians and parties involved in the election. We would have discussions that come from outside. In my position as mayor, I found that the meetings with citizens were excellent. Cynically, it is a safety valve for citizens who can express his anger and frustration. This also allows you to hear the rage and disappointment of people who come up with ideas that can be taken. This is the beginning of a debate.
What is the problem then?
These exchanges provoke opposition and defections. Or the elected hate being abandoned and no longer supports the contradiction. So he will do anything to keep his vision since he considers to be right. In short, it comes back to the original question and the debate on truth and jihadism.
So what?
We must abandon the idea that there is one truth even in politics, even ideology. And this is the debate that will fix this!