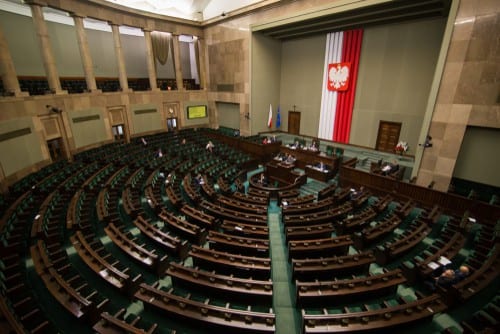 by Konrad Golota
PES Advisor on the Central and Eastern Europe.

“The most important elections since 1989” were saying all parties running in General Elections on 13th October in Poland. The competition was quite narrow, so all the parties focused on the mobilisation of voters.

The results to Sejm are:

What does this really mean?

1. The winner takes it all?

Kaczyński and his party were aiming at the constitutional majority. The good economic situation with 4,3% growth and an unemployment rate of 5,5% (average 01-08.2019), huge social transfers with 13th pension, increasing child benefits programs (120 euros monthly, unconditionally per each child of direct transfer to parents), absolute power (Sejm, Senate, President), public TV as pure pro-governmental propaganda, finally electoral promises such us almost doubling the minimum wage in 4 years, decreasing corporate tax, no taxes for citizens under 26 were altogether the plan to dominate the political stage even more than in past 4 years. The ruling party added an ideological aspect by framing the election as a choice between a society of traditional Catholic values and a liberal elite that undermines family life. Together with the Catholic Church, it ran a hate campaign based on homophobia and anti-LGBT sentiment. The result? The same majority in the Sejm and they lost the majority in the Senate. And they face a new situation: a challenger on the right. “We achieved a lot, but we deserve more,” said Kaczynski – and it’s a perfect description of moods in PiS.

In 2015, United Left, a coalition of SLD, Greens, Palikot Movement and Unia Pracy failed to enter parliament with 7,55% and as a result, the last 4 years the Polish left spent out of Parliament. Many things had happened along the way. It’s enough to say that 3 months before the elections, 3 parties: SLD, Razem and the newcomer of the European Elections, Wiosna, created the coalition Lewica and after a really good campaign, it came back to Parliament with nearly 13%! It was not easy to merge on one list the three parties of three different generations, three different traditions and three different groups of votes. But the process was surprisingly smooth and successful. Moreover, the new MPs from the left are a group with a big representation of the younger generation and with an almost equal gender balance in their Parliamentary group.

The good and clear program, modern visualisation and a campaign full of engagement were rewarded by voters.

The head of the campaign, Robert Biedroń said on the electoral evening: “We are coming back to the Parliament and we will work each day, each week, month and year in order to show that Poland can have a different face than the one we have seen in last 4 years, that Poland can be open, tolerant, smiling and can be a welfare state”.

He was followed by SLD leader Wlodzimierz Czarzasty, who said to the leaders of the two coalition partners: “I had nothing, you had nothing, he had nothing, and we came back to Parliament. (…) This is a great success. For the next 4 years, we will be working on the best program, we will be preparing for the best way of governing”. Adrian Zandberg, leader of Razem added “The Left is coming back to Parliament as the 3rd power, with strong representation. Jaroslaw Kaczynski will have a problem because we will be the opposition which is courageous and has a will to fight”.

Nothing in Polish politics is as simple as it seems.

The parties represented in various coalitions in Parliamentare::

Altogether, these are 15 parties on five electoral lists. That’s why we can expect changes within the parliament and a lot of tensions.

The governing party received 43,6% of votes. That also means that 55,3% of votes were cast against party of J. Kaczyński. This might Sound good for progressives, unless we will notice that PiS and Konfederacja, both rightist parties, received together 50,4% votes and additionally PSL is conservative as well as part of Civil Platform.

There will be then only one real evaluation – voting on legislative proposals.

In the case of those elections, nothing can be more wrong than the widespread idea ‘my vote doesn’t matter’. The opposition lost the elections to Sejm, but won to the upper house, the Senate. The seat distribution in the senate is:

Contrary to the race for the Sejm, in the most constituencies the opposition parties clubbed together and ran for the Senate with only one candidate against Law and Justice.

Why is the result so important? During the last 4 years, when it had the majority in both chambers, PiS made Parliament its private tool. Often, controversial bills were voted in the middle of the night and at breakneck speed. From the presentation of the first draft to the adoption by both chambers, sometimes only in 24 hours passed! Having the majority in Senate, the opposition can block, or delay legislation proposed by PiS. The opposition has a chance for a real discussion while in the Sejm sometimes the time for interventions was limited to 30 seconds.

It has to be noted that two seats for opposition have been won by only 1806 votes. If 903 voters would have voted differently, PiS would have kept the majority in the Senate!

According to an analysis of OKO.press, if only women would have voted the results would be:

No seats for nationalists from Konfederacja and 238 seats for opposition!

This clearly shows a different thinking, desires and fears between men and women in those elections. And it can be a lesson for progressive parties to focus even more on addressing the message to women and encouraging women to be the majority of active voters.

PiS must learn how to cooperate and if they lose Presidential elections in May 2020, will have to learn cohabitation. And they are not good at it!

The Civil Platform will face discussion about the three elections lost in a row, a weak campaign (and still they received 27%), about leadership and the general line for the future.

The Left made a great come back, has big perspectives, the most promising MPs and one big question: – Staying three separate parties or rather merging into one – both options are challenging and risky for different reasons.

PiS won again. But 4 years ago, the opposition was demolished, the left was out of parliament after having lost both chambers. In 2019, there is an opposition in the Senate, the left is back with a decent result and the presidential elections are just ahead. Finally, PiS has probably reached their glass ceiling of gaining voters by social transfers. Poland can fall into a recession or just slow down the growth which means tougher time with a budget and no room for another transfers, which can be expected by voters. Poland can be one of the most interesting countries in the upcoming years. And I personally believe that it will be one, giving a lot of inspiration to the European progressive family on how to make good politics and reach new voters in difficult times.