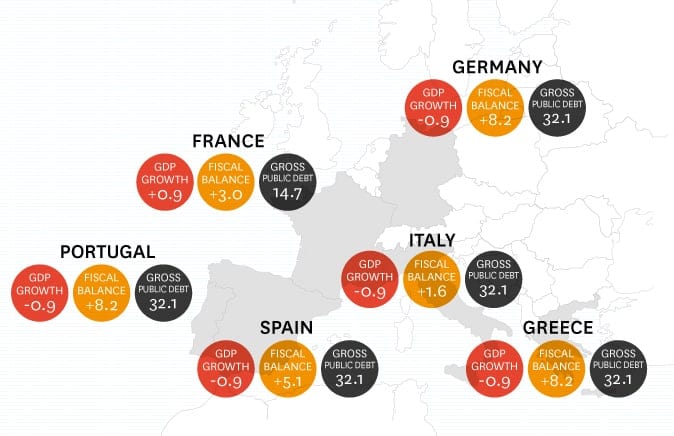 Barely two months into 2016 talk of “Grexit” returns, the ECB searches its ineffective options to counter deflation, and most euro zone countries flounder in economic stagnation. All this is sadly familiar.

When the first Greek debt crisis began policy makers in Brussels, with strong support from the German government, set forth an economic strategy focusing on expenditure reduction, quickly labelled “austerity”. The narrative justifying this doctrine for a parsimonious public sector finds its antecedents among the pre-Keynesian economists of the early 20th century. The narrative maintains that the private economy adjusts itself to full employment. Market regulations and policy mistakes by governments prevent that automatic adjustment.

The Maastricht Treaty was designed with guidelines to curtail this alleged tendency to mismanagement by governments. These guidelines set specific maximum or minimum targets for the public budget balance, public debt and inflation. The targets, the “Maastricht Criteria”, guide the economic policies of the European Commission: not more than minus 3% of GDP for the overall deficit and a maximum 60% for the gross debt to GDP. The somewhat more complicated inflation guideline quickly lost relevance when the euro zone descended into deflation.

Interpreted as inflexible imperatives, as they are now by European commission, the Criteria become undemocratic constraints on elected leaders. They restrict the application of rational fiscal policy in response to changing economic conditions. The Criteria should not be narrowly interpreted as constraints on “national sovereignty”. Were there a democratically based EU-wide government with fiscal powers, it would be equally immobilized by the Maastricht straight-jacket.

Because of this immobilization of democratically designed fiscal policy, the member countries must rely on policies from the non-democratic European Central Bank. Whatever one might think of the wisdom and effectiveness of “quantitative easing”, it is a policy that has little democratic legitimacy and accountability. With its eye on the response of financial markets to its every move, the ECB cannot practice policy transparency. As a result, the ECB is not the institution to lead economic policy. That should be the function of elected officials, national or in a future EU governemnt.

The citizens of the European Union and especially the euro zone find their national economies substantially affected by an institution about which they know little. The decisions from the ECB emerge with all the mystery and opaqueness of smoke rising from the chimneys of the Vatican after the election of a Pope. This lack of openness is the direct result of an austerity doctrine derivative from inflexibly applied fiscal rules that themselves should not exist.

The austerity doctrine promised economy recovery through a constraining fiscal regime that would reduce fiscal deficits and lower public debt overhang. The deficits themselves allegedly discouraged private investment by the public borrowing disrupting credit markets. Analogously the public debt overhang undermined both household and business spending because “forward-looking” economic agents anticipate the increased taxation necessary to service the debt. These arguments have validity only when an economy operates at full employment, an empirically false presumption that is the keystone of the austerity doctrine.

Whatever the theory supporting austerity, it has not achieved its expressed goals. The table below shows the outcome of five years of attempting to cut deficits and lower public debt for six euro zone countries. Governments of four of the countries implemented strict austerity programs under pressure from Brussels (Greece, Italy, Portugal and Spain). The GDP growth rate in the first column is a simple average of the six years.

Over the six years national product in four of the countries contracted, and in the other two the rate of expansion bordered on stagnation, less than 2% per annum. An annual rate of 2% represents a modest estimate the GDP growth required in most euro zone to prevent unemployment from rising, because it barely covers productivity growth plus the increase in the labour force.

Over the six years and six countries annualized growth rates equalled or exceeded the 2% minimum in only 21 quarters out of 144. Growth rates reach this minimum eight times in 2010 (4 in Germany), seven times in 2011 (again, 4 in Germany), not once in 2012 or 2013, twice in 2014 (France and Germany), and four times in 2015 (Spain). During 2011-2015 the economies of three of the six did not once achieve 2%. Perhaps the most damning statistic for the defenders of austerity is that 60% of the quarters had negative growth rates.

The Greek economy suffered the worst collapse, coinciding with the introduction of creditor imposed austerity. Were it not for that economic disaster the performances of all the other economies, including that of Germany, would be recognized for what they are, stagnation unprecedented in Western Europe during the post war years.

In all the six countries the fiscal balance rose (“improved” the austerity ideologues would say). That the two largest increases occurred in the countries with the lowest growth rates is no accident (Greece and Portugal). This outcome should be expected. Increasing the fiscal balance (reducing a deficit), depresses demand; depressing demand lowers growth. The German economy could show the highest growth rate, modest as it is, by de facto mercantilism – in 2010 the German current external account had a balance of 5.2% of GDP, high by international standards. For 2015 the balance soared to 8.8%, far in excess of China’s 2.7%. Among the countries in the table, Italy came next behind Germany with a meagre-by-comparison 2.2%.

Despite increases in fiscal balances, the associated slow economic growth resulted in failure to reduce the gross debt to GDP ratio. The final column shows the percentage point change in this ratio, with the debt measured according to Maastricht rules. Only for Germany does the debt to GDP ratio fall. One should pause before issuing congratulations for German prudence and sound management of public finances. The ratio fell by an extremely modest 10 percentage points after six years. At that rate the German government will not reach the Maastricht 60% target this decade.

Therein lies a clear lesson for the other countries, whose debt to GDP ratios rose by 15 to 40 percentage points (France and Portugal, respectively). Deficit reduction via expenditure cuts and tax increases depresses GDP growth. Should the austerity measures eventually generate a positive fiscal balance, at the near-stagnation rate of growth that results from these demand depressing policies the rate of debt reduction makes snails appear speedy.

Output stagnation, accompanied by its witch’s familiar persistent debt overhang, makes clear that the dysfunctional EU austerity cannot be “muddled through”. It requires radical revision, nothing less than the abandonment and/or repeal of decrees and treaties than require governments to pursue pro-cyclical fiscal policy.

In the short term Brussels and national governments should interpret the Maastricht rules “flexibility”. A flexible approach characterized pre-2008 policy and should again. As dysfunctional as the rules are in themselves, their dysfunctionality becomes disaster when applied flexibility during economic expansion then strictly during recession. This is pro-cyclical macroeconomic policy and the reverse approach should be applied.

Danger looms large down the austerity road. Anti-integrationist parties claim the support of large parts of the electorates in France and Spain. The new government in Portugal may break with or at least force a confrontation over Commission directives on its budget plans. In Italy the prime minister, once strongly supportive of the EU, now threatens public revolt against EC austerity.

The growing support for right-wing anti-integrationist parties throughout the European Union calls for a coherent response from progressives in every country. A central plank in the progressive case for the European Union must be abandoning a fiscal policy based on the austerity doctrine. In the longer term the present deficit and debt rules require radical revision.