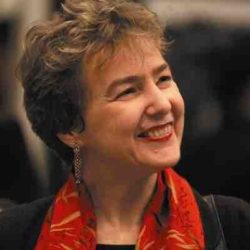 by Kate Hudson
Activist and academic

Since Donald Trump entered the White House, there have been sustained attacks on the treaty architecture that underpins the international rules-based system that most countries struggle to uphold and extend. This is particularly marked in terms of arms reduction and disarmament. These processes haven’t just stalled – they have actually gone into reverse. The whole principle of multilateralism has faced successive onslaughts. And with John Bolton at Trump’s right hand as National Security Advisor, non-proliferation and disarmament treaties are not long for this world.

The Trump administration is doing its very best to destroy the 2015 nuclear deal with Iran, whilst also banging the drums of war with the country. The US withdrawal and attempts to reintroduce sanctions on Iran can only lead to greater instability in the Middle East and increase the likelihood of more countries in the region pursuing nuclear weapons. This move by Trump is not a popular one: all the other signatories to the deal are trying to uphold it, with Europe in strong support, but it’s not clear how long this will be sustainable.

President Trump has also withdrawn the US from the 1987 Intermediate-range Nuclear Force (INF) Treaty with Russia. Russia has since done the same. This treaty has been a cornerstone of nuclear arms control since the Cold War, having eliminated thousands of nuclear missiles in Europe, playing a crucial role in ensuring that US missiles are not situated on our continent. There are many possible dangers as a result of its cancellation, not least a new nuclear arms race, with US missiles back in Europe trained on Russia. But it may not be limited to Europe. The US strategic reorientation, outlined in the December 2017 National Security Strategy, has shifted the US focus from the threat of terrorism to that of ‘revisionist powers’, both Russia and China. This increased focus on China, stepping up from Obama’s ‘Pivot to Asia’, raises the possibility of locating a new generation of intermediate-range nuclear missiles in the Far East – in Japan – possibly Okinawa, South Korea or Guam. The potential consequences of such an escalation would have to include nuclear war. Given the risks involved it is not surprising that Europe wants to maintain this Treaty.

As if it can’t get much worse, the US withdrawal from the INF treaty also calls into question whether Washington will work with Moscow to renew Presidents Obama and Medvedev’s New START treaty from 2021, when it is due to expire. If Bolton has his way, once the Treaty expires, there will be no restraints on nuclear weapons left. A grim prospect indeed.

Further dangers arising from Trump’s vision for the US were highlighted during a recent visit to Japan in May to meet the new emperor and the Prime Minister, Shinzo Abe. Abe is notable for abandoning Article 9 of Japan’s ‘peace constitution’, which had outlawed war as a means of resolving international disputes. Most strikingly, Trump revealed that he and Abe have agreed to expand their cooperation on human space exploration, with Japan joining US missions to the Moon and even Mars. ‘It’s very exciting,’ said Trump, before going on to give us the real meat: ‘And from a military standpoint, there is nothing more important right now than space.’

Of course, we know this has been on Trump’s agenda for a while. Just last summer he reconvened the National Space Council – on ice for years – and instructed the Department of Defense and the Pentagon to set up a sixth branch of the armed forces: the Space Force. As Trump says, ‘When it comes to defending America, it is not enough to merely have an American presence in space. We must have American dominance in space. So important.’ But the trouble is, it’s not just this one area – US dominance is pretty much Trump’s approach to everything. The danger is that this will cut across decades of commitment to key treaties – not just important bilateral agreements like the INF Treaty and the Iran nuclear deal, but foundational multilateral achievements of the global community, such as the nuclear Non-Proliferation Treaty, which has underpinned five decades of international endeavours to advance nuclear disarmament and prevent proliferation and has set a moral and aspirational benchmark for all peoples.

Europe’s role is clear: it must defend the rules-based system, the treaties that underpin our security and prevent descent into destruction and nuclear annihilation. Regrettably, recent electoral trends in Europe have shown a growth in support for the far-right politics that Trump embodies. Without making an assumption that these forces in Europe will have a similar disregard for negotiated international agreements and fact-based policy frameworks, nevertheless this is a risk that must be carefully monitored.

Thankfully, the recent European election results show that the advance of this political trend has stalled, overall performing little better than at the previous ballot in 2014. Significantly, they have failed to make the breakthrough to European-wide predominance that they expected, providing a necessary bloc to the advance of Trump’s politics in Europe.

Defence of progressive values, underpinned by legality, morality and respect for others, must be the first priority of our European parliamentarians. But the prevention of war has no lesser importance; our continent has a tragic history of conflict that has pulled the entire world into its wake. Restraining militarisation, defending the UN treaty-based system, redirecting resources to peace building initiatives, employing diplomatic means to resolve conflicts – these are the roles that Europe can play – and indeed champion worldwide. Seeking out the root causes of seemingly intractable problems is crucial – so often conflicts are based on disputes over access to resources or over migration flows; that will only increase with the impact of climate change. And of course ‘history’ – how it is perceived and understood, its lessons for today – is of immense consequence too. Surely Europe must understand that above all, and facilitate all ‘sides’ coming together as an international community, whether over the INF Treaty, the Iran nuclear deal, or wider questions. To address these immense global problems must be a key goal, in the context of a multi-polar world where the development, rights and prosperity of all is the foundational principle.