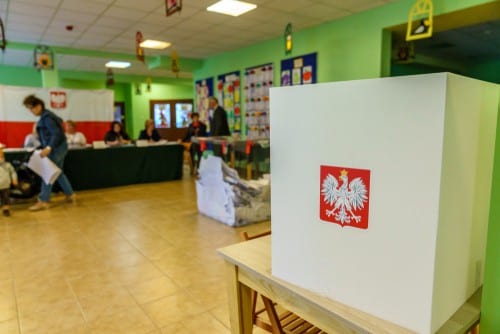 Last Sunday, 13th of October 2019 an unprecedented number of Polish both in Poland and abroad went to cast a vote in the general elections. It had nothing of a fatigue that otherwise could have been the case in a nation that went to vote for the third time in just 12 months. To the contrary, it had everything to do with passion – either to support the governing and majoritarian Law and Justice or – quite the opposite – to put an end to their rule. It resonated in the turnout showing that almost 2/3 citizens casted their votes and many in fact even went queuing to do so. Abroad – in places like London, Frankfurt or Brussels – there were moments when waiting time was about 2 hours.

The outcomes show a number of issues. First of all, whilst PiS remained the leading force in the lower Chamber (Sejm) and has a simple majority, it didn’t accomplish the goal of reaching a constitutional majority. To that end, it even lost one of the seats and its leader and guru, Chairman Kaczynski, finished off in Warsaw with the second result (after Malgorzata Kidawa-Blonska, who was KO – Civic Coalition’s candidate for Prime Minister). Her result was almost a double of his, mounting to half a million votes. One could argue that the capital (plus constituencies from abroad of which count for Warsaw) are special, but at the same time in circumstances of a voting system that is preferential in terms of supporting individuals on the lists, this is of course telling. To that end, PiS also lost the upper Chamber (Senat) – where the opposition jointly got 51 out of 100 seats. Whilst the Senate may not have been appreciated for its powers in the past, now the fact that it can reject the bills adopted by the Sejm and that it has power of initiative will become an issue for PiS – a party so accustomed to control the process and dare playing in between Sejm, Senate and President so far. And this altogether makes this political force quite anxious, even if the right-wing press tries to keep everyone calm by talking about victory and putting headlines such as “PiS continues to govern”.

Secondly, when talking on preferential votes – it may have been predicted that Lewica (Left) would come back and resume seats in Parliament, but there was hardly anyone who would expect Adrian Zandberg, leader of RAZEM (one of the three parties that joined in the electoral alliance) to win the third best result in the country. This undoubtedly exceedingly intelligent and imaginative man had been known for his rather radical and even utopian views. His results is to that extend somewhat symbolic for the support that Lewica received. It was casted for an idea of a united centre-left force, it was in favour of clarity of a programme that they presented and to that end, it was also encouraging a generational change that took place. Lewica entered Sejm with 49 names amongst whom a majority is elected for the first time and they declare their unbreakable commitment to the clear programmatic pledges: laic state, equal rights for everyone and just socio-economic policies (such as upgrading of minimum wage). The question though is if they will fight for it in one or more parliamentary groups.

The political landscape will evidently settle soon, but even when it does, the greater issues will remain a challenge.

Thirdly, there is an interesting twist to the result of the Civic Coalition. Back in spring, Civic Platform (the core of that alliance and the party from which Donald Tusk origins) was the one to gather around it a number of diverse partners from left to right. The argument then was that in the circumstances of political polarisation, the only way forward is to face the power of PiS with a united power of everyone else. This by default was an instinct of a two-partisan system, which in a version “duo-pol-plus” had been a feature of the Polish partisan reality of the last years. But re-grouping after the European vote and the result of today prove two things. On one hand, Civic Coalition (as the formation established for these elections was called) was very keen on adopting numerous personalities into its ranks – causing diluting of both its win and those individuals’ programme and identity. On the other, with 5 electoral forces entering Sejm, there can be no talk about the dominance of just two parties. One does not need to wait for too long to see what it will mean also in practice, as the ongoing discussion about who should become the speaker of Senate already shows that the others are not inclined to allow Civic Platform to speak and choose on their joint behalf.

Therefore, the post-electoral landscape features parties that are still on a move in many different ways. First, PiS is trying to decide if it is to pursue an aggressive strategy to use to maximum this mandate (which may be its last in power) or should it adjust the course. At this point it looks that the first trajectory will be the chosen one, especially because although the elections provided delegates for the new legislative period the previous Sejm, with the previously elected MPs is still in session. This is not only bizarre, but above all questioned vehemently by many, since using these last days of the previously elected parliament, the lower Chamber is debating making sexual education of minors illegal and penalised with a sentence of 5 years in prison. Second, Civic Platform is now to engage in a new kind of strategic conversations as it cannot count on a primacy on the opposition side by default. Its leader Grzegorz Schetyna spoke during the electoral night about these elections being just a step ahead of the Presidential ones next year, but it is highly unclear if their parliamentary group will to be able to stay consolidated and sustain coherence in votes. Finally, Lewica had already agreed ahead of this election that Robert Biedron (currently an MEP and head of the last campaign) would be its candidate for President, but the challenge to stay united is still there and it will be quite interesting to see how it will be faced by SLD (which, as its leader Wlodzimierz Czarzasty stated, supports it wholeheartedly), Razem and Wiosna (respectively).

The political landscape will evidently settle soon, but even when it does, the greater issues will remain a challenge. On the bases of what has already been analysed, it is clear that Poland is an exceedingly divided country. The first is the disjunction between the urban and rural populations. It is not an unusual feature, as it is also noted for other EU Member States. The specificity in Poland is however that it is the rift that PiS explores the most, talking on “Poland A and Poland B” and inducing animosities amongst these. Secondly, there is a clear cut between East and West, which for centre and centre left is a clear “Eastern Discomfort”. Some analysts draw parallels between today’s electoral map and the map of Poland from under partition (the entire XIXth century), whereby the territories that used to be under Imperial Russian rule vote decisively nationalist PiS today. The odd of this claim is that this rift seem to have been fading away during regional vote and is now back and bolder. Thirdly, there is an obvious educational cleavage when it comes to the groups of voters. Lowest and lower-middle educated in principle supported PiS, which was unsuccessful in attracting higher educated ones.

What does that mean for a long term for a country that has been deconstructed, when it comes to its democracy and rule of law already? The answer is perhaps that one: the electoral result should be celebrated as a step towards what make become a breakthrough. But the effects of the PiS agenda ‘dobra zmiana’ (good change) that was put in place the last four years will need longer to be reversed. The first step is to re-establish the idea of what the state is and why all citizens need to have equal rights and be enabled to contribute to its’ development. No other way can tackle either the demanding side of those, who grew accustomed to single transfer benefits nor will re-engage those, who feel part of a squeezed middle or in any other way discriminated groups. The second is to establish a vision of social progress for all, which would make each and every one advance on one hand, and on the other would help closing differentiating gaps. It perhaps sounds trivial, but the priority should be revisiting the premises of the educational system. What will make it harder to do in the next months is the fact that economists expect recession, which unless in fact anticipated on via social agenda will hit harder and divide further instead. Finally, the third one is about establishing a new way of coexistence – inside of the country, with neighbouring states, in Europe and on the global level. This is about showing that modernity and openness can bring more to everyone – from individual to international levels – than the fear-anchored prejudice and hate that have been promoted in public discourse instead.

In that sense, a well-known phrase claims that it may take a village to raise one child. But it definitely will take the whole country to make a difference and to that end, all the progressive, future oriented political forces to lead towards it in an inclusive, just way.