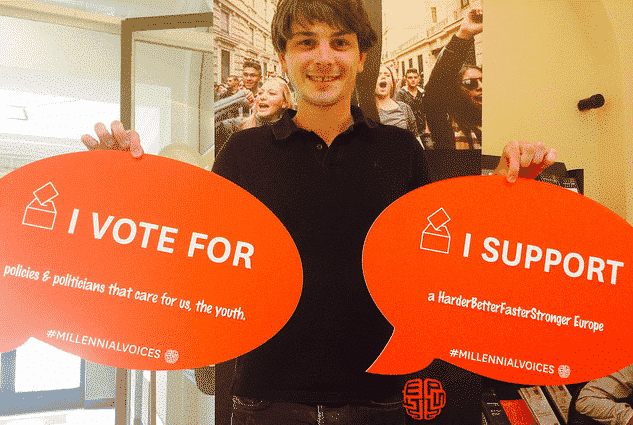 The Millennial generation, those born between 1981 and 2000, is now the largest living generation in the United States, surpassing the Baby Boomers (1946-1964). It is diverse, well educated, connected, and participatory. It has directly borne more of the costs of its education that previous generations and has suffered greatly during the Great Recession with high unemployment and low wage growth. They reached adulthood at a time of great national and global crises coupled with a collapse in confidence in the major institutions of American government and society. Despite these challenges, Millennials are the most optimistic age cohort in the United States today.

In many ways, Millennials are having an outsized influence on this election, even relative to their size. The surge in support for Bernie Sanders in the Democratic primary was built on overwhelming support among voters under 30 is well documented. Less discussed, however, is that the building blocks of that wave began with the Occupy Wall Street movement that forced the issue of economic inequality into the political discourse and started the shift away from austerity politics that had dominated since the end of the Great Recession. Millennials are shaping the political debate in more ways than simply at the ballot box.

That is necessary, unfortunately, because Millennials vote at relatively low levels, even when compared with other younger generations in the past. This has translated into a political environment in which society is moving left, driven at least in part by broad support among younger Americans, yet at the same time conservatives are dominating at every level of government outside the White House. The key challenge for progressive and Democrats over the coming years is turning this powerful generational force into a driver of political change up and down the ballot in federal, state, and local elections.

One factor shaping the political views of Millennials is its record-setting ethnic diversity. Minority groups tend to be more socially liberal and favor more government policy and action than do white Americans. And 43% of Millennials are non-white. In this way, Millennials are a harbinger of things to come, as it is likely to be the last adult generation in the United States that is majority white as half of all newborns in the U.S. are non-white and the country as a whole is projected to be majority non-white in about 2043.

Millennials are graduating from high school and attending and graduating from college at higher rates than any previous generation. In the past, obtaining a college degree was the single most significant factor in determining long-term earnings success. That may still be true as Millennials get older, but the exploding costs of college has meant more student loan debt for this generation than any other [fact on student loan debt]. When combined with the terrible economic environment that has coincided with most Millennials first post-graduate years, it has depressed the impact of a college degree. The average debt burden per college graduate in 2015 was $35,000, more than twice the average amount owed in the early 1990s.

Millennials have been hit with the double blow of very low wages to accompany their increased student loan debt. They earned roughly 10% less than their counterparts did just a decade ago and are about even with what their fellow 20-somethings earned in 1980. And youth unemployment stood at 10.8% in April 2016, which is low by the standards of many European countries, but is more than double the unemployment rate of Americans’ as a whole and about three times the rate for those over 30.

It is of little surprise, then, that Millennials would turn to an outsider, progressive politician who is speaking directly to their challenges and proposing solutions that are at a scale commensurate with their problems. The 74-year-old democratic socialist Bernie Sanders has galvanized America’s youth with his calls for debt free college and fighting against an economic system that he charges is rigged in favor of the already well-off and a fundamentally corrupt political establishment that is beholden to Wall Street elites.

The numbers are staggering. In the 25 states in which exit polls were conducted during the Democratic primary, Sanders won 71% of voters under 30 compared to Clinton’s 27%. To put that in perspective, that is 11% more than Barack Obama won against Clinton during the 2008 primary. The incredible strength of Sanders among young voters transcended all demographic and ethnic groups. Among African-Americans, for example, Clinton dominated among those over 30, winning nearly 75% of the vote. But Sanders was actually able to win blacks under 30 52%-47%.

Part of the reason for Clinton’s victory despite her struggles with Millennials, however, is that these young voters simply don’t turn out at anything like the numbers of older age groups. Carrying forward the example of African-Americans, in those 25 states with exit polls, blacks under 30 comprised just 3% of the total Democratic primary electorate, while blacks over 60 were 7% and all those over 30 made up 22% of all Democratic primary voters.

Now that the primary campaign is over, the challenge for Hillary Clinton and other Democrats is that Sanders has raised the expectations of what the political system can offer Millennials without having any responsibility to actually deliver on his promises. This is a recipe for disappointment and disillusionment. And when young voters have been won over in part by a message that blames their genuinely difficult economic situation on corruption and a rigged system, it will be hard to convince them that the real reason that 2017 is unlikely to produce major change is mundane process issues like gerrymandered districts and the filibuster.

This election is an inflection point for both major parties in the United States. Republicans have numerous issues that I’m sure I will discuss in more detail in a future edition of this newsletter, only some of which have been surfaced by Donald Trump.

But the Democrats too have their own problems. The strength of the Sanders movement has surprised many and the concentration of his support among Millennials represents both an opportunity and a challenge. If the generally progressive Millennial generation could be harnessed to support Democratic candidates up and down the ballot, it could usher in an era of progressive governments across the country. But if the continued dysfunction of our government conditions them to disappointment and they tune out politics in general, the odd dynamic of a country growing more progressive but locked in conservative governance is likely to continue.