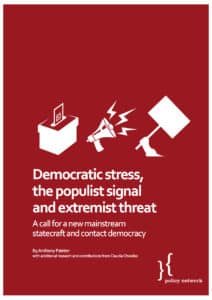 The most successful new family of parties in Europe over the last quarter of a century has been the populist radical right. In country after country, new right wing populist parties have established themselves as signi cant players for o ce, power, and public voice. This advance should not be overstated. Only in Switzerland and arguably Hungary have these populists become leading contenders for office. Nonetheless, across Europe the populist radical right has become a permanent feature of the political landscape. The argument of this report is that this phenomenon – the populist right as a challenger brand within and to liberal democracy – says something very signifcant about the state of modern democracy and requires a robust response from the political mainstream.

The Policy Network project on populism, extremism and the mainstream has over the past 12 months considered the features of identity politics and populist movements in the modern European context and how parties – of the left and right – have responded to their different manifestations. It has investigated campaigns, policies and political approaches that have resisted and defeated the antagonistic and corrosive aspects of identity politics and populism – and considered where mainstream politics has failed.