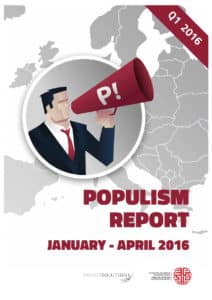 The new report of Policy Solutions states that as compared to the dynamic growth of populist parties in 2015, in the first quarter of the year 2016 the position of most of the populist parties remained unchanged or even declined slightly.

Only 8 parties in the 78-party sample had made significant gains exceeding 3% in the first quarter of 2016. The halt in the growth of populist parties has been mostly explained by the decline in refugee numbers, while another explanation is that they have managed to attract the near maximum level of support that they can achieve as parties that are in many cases viewed as extremist.

Although the supports of most of the populist parties had not changed significantly in the first months of 2016 compared with the year 2015, there were a few winners and losers of the period. The Bulgarian governing GERB dropped the most in the period, while the biggest winners were those, who had elections in their countries in these months, like the leftist Podemos, the four rightwing populist parties in Slovakia or the German Afd.