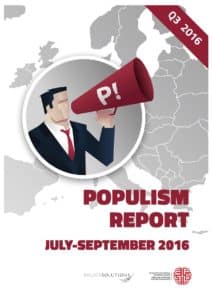 During the customarily politically calm summer period – apart from a few striking exceptions – there has been no significant change in the support of populist parties across Europe. Thus, in the third quarter of 2016, the trend of previous periods has continued with the support of populist parties halting in growth, reaching their apparent pinnacle. In most member states, the popularity of non-mainstream parties has continued to either stagnate or fluctuate to a degree that has not exceeded the margin of error. Only in five EU member states out of the 28 did we register a change in the overall social support of populists that has surpassed the margin of error.

Summary: With the support of European populist parties at a standstill, this year’s general trend has continued during summer months too. However, their decelerating expansion across Europe is at best a neutral, and in no way a positive development. According to opinion polls, it seems that populist forces have managed to stabilize and consolidate their support base. While in a number of EU member states the support of populist parties is already significant, in a number of other countries, such as Hungary, Poland, Bulgaria and Austria, they even amount to the most popular political forces or are aspiring to achieving it. Even though in some countries we have witnessed a decrease in demand for populists, this trend has been most typical – besides the Brits facing post-Brexit realities – only in Poland, where the degree of support for populists was high enough already. In turn, the examples of Latvia, Cyprus and Slovakia are a warning sign that European populists are capable of further expansion. It can also be instructive that according to these findings, excessive anti-migrant campaigns do not necessarily lead to an expanding voter base, as among the V4 countries only Slovakia has seen a significant increase in support for populist forces during the third quarter.