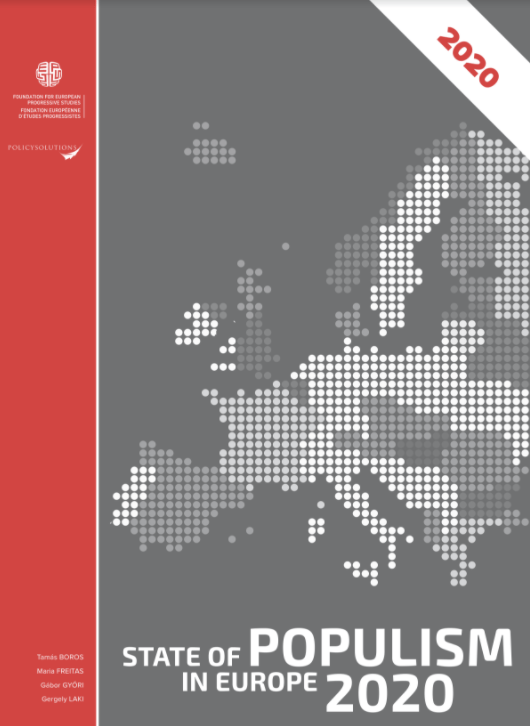 Populism in Europe 2020 – ending a project of half a decade

When the Foundation for European Progressive Studies (FEPS) launched the Populism Tracker project jointly with the Budapest-based Policy Solutions in 2015, we set out to gauge the impact of these changing trends, to present their insights about this phenomenon to the wider public, and to propose progressive answers instead of populist politics. We were among the first to systematically track the popularity of over 70 populist parties in the European Union because we believe that we should draw on data rather than the impressions generated by media bubbles to obtain a realistic picture of how dangerous the spread of populism has become on the continent. We have been looking at public opinion polls in 28 (and now 27) EU Member States each month since 2015, observing the appearance of new populist parties and the disappearance of previous ones, the rise to governmental responsibility of some and the fall or, alternatively, the re-election of others. Each quarter we published a summary in which we reviewed how populist parties stood among likely voters, and we also published annual reviews in which we discussed the developments of the past year in the European populist scene and the changes therein. This publication is the fifth in this series.

Just as in the case with the previous volumes in this series, our goal is not merely to present figures and political events but also to highlight the emerging trends and to help prepare our readers for the changes on the horizon. Over the past five years, we have highlighted numerous such developments. We emphasise five important trends and insights from these five years:

2020 marks the end of an era. After five years of continuous tracking, this is the last joint FEPS-Policy Solutions volume on populism. We continue to believe what we wrote at the beginning of our joint research project: “Learning about populist parties will help us in better understanding them, and ultimately also in defending values such as liberal democracy, solidarity and deeper European integration.” The numerous volumes we published on this topic – including our handbook entitled Progressive Answers to Populism – have sought to promote the underlying values. We trust that our work has been useful and interesting to all of our readers.