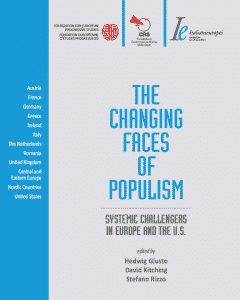 Populism is both a reaction to, and a product of, the growing distance between citizens and their institutions of governance, whether that is at state or European level. Populist movements accuse European Union institutions of elitism and remoteness from the everyday lives of ordinary citizens. At member state level, they accuse the politicians of traditional parties of catering to unknown interests at the expense of their own people, and of inefficacy in a rapidly changing world. Populists play on fear and demagoguery instead of en‐ gaging in constructive dialogue to help improve public life.

They try to claim the mantle of democratic participation, while posing a most pressing and difficult challenge to democratic institutions.

Those who work within the political system have several options at their disposal. Some will adopt “copycat” tactics, absorbing some of the language of populist movements into their discourse. This runs the risk of legitimating such movements and bringing intolerant perspectives into the main‐ stream. Others will speak from an “Ivory Tower”, assuming that they know best and that they do not need to look beyond their own milieu. Yet elitism and populism are two sides of the same coin. Each begets the other and we see in several of the cases in this book that the technocratic impulse is often a par‐ ticular target of populist and anti‐system movements. The third possibility is to seek to understand these movements – and the conditions that allow for their growth – through rigorous research and empirical analysis. Only when we understand such social and political dynamics, beyond the sound bites and received truths of the 24‐hour news cycle, will we then be able to offer viable counter‐arguments.

This is the approach preferred by FEPS. It is about engaging in active citizenship to ensure the democratic legitimacy and viability of our representative institutions. It is a means to empower citizens to move beyond the easy answers of popu‐ lists to a basis for a genuinely reflective and participative de‐ mocracy. The foundation’s work on populist movements began with an initial request for research on far right parties in 2011, although related issues of citizenship, migration, social inclusion and democratic consolidation have been part of FEPS research activities since the beginning.

This particular project was born out of a conference in Rome organised by FEPS together with Italianieuropei and the Centro per la Riforma dello Stato. It was decided to publish a book of case studies to reflect the diversity and wide spectrum of movements that presently exist in Europe and North America. It is impossible to include everything in one study but the pages that follow offer snapshots of groups ranging from new street movements and quasi‐parliamentary organisations to those that have been somewhat systematised.

We hope the book serves as a fresh analysis to be used by policy makers, students and anyone with an interest in comparative European politics. The perspectives presented in this book represent the views and analyses of the individual authors and not necessarily those of the three sponsoring foundations. Having said this, I wish to congratulate all of the authors involved and to thank them profusely for their valu‐ able work. I would also like to thank the three editors – Hedwig Giusto of Italianieuropei, Stefano Rizzo of Centro per la Riforma dello Stato and David Kitching of FEPS – for the time and effort they have taken to complete this project.