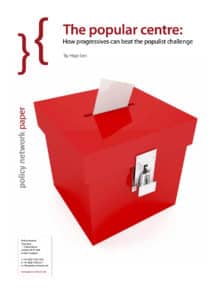 The Popular Centre – How Progressives Can Beat the Populist Challenge

The financial crisis and its aftermath has brought with it not only economic dislocation and disruption, but a huge political challenge to established political parties. From both ends of the political spectrum, populist parties such as the UK Independence party, National Front, Swedish Democrats, True Finns, Syriza, Podemos and the Five Star Movement present a threat to both the centre-left and centre-right. With politics itself seeming to have failed, both centre-left and centre-right parties struggle in their response. Some are tempted to try and ‘out-populist the populists’. Such a strategy is, however, fatally flawed. Instead, centrists should develop a social and economic reform agenda that is both highly likely to be achievable and perceived to be so. Moreover, by focusing on small, concrete steps, it is possible to demonstrate that politics can have significant, meaningful outcomes. But centrists need to do more than this: they should allocate blame for the failure of politics where it belongs: with politics and the state itself and embrace reform of both the practice of politics and the structure of the state. By combining focused, concrete, limited social policy changes with a passion for reform of a failing politics and governance, it once again becomes possible to construct a popular centre capable of beating the populisms of right and left on their own terms.