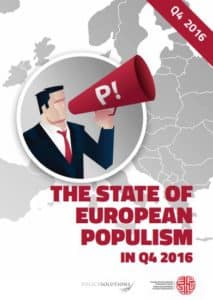 The State of European Populism in Q4 2016

In the light of the last few months’ election results, it can be stated that the power of populism in government has expanded. The most important of these events is the populist turn of the USA. Donald Trump’s administration could be an important external ally for euroskeptic and anti-migration European populists in their conflicts with EU over the next four years. Trump’s victory can boost the campaigns of those European right wing populists, who are preparing for victories in 2017. The tight result of the Austrian presidential election is also a warning to the growing challenge of far-right populism.
The electoral success of Lithuanian and Romanian populists also indicates the increasing demand of populism against mainstream parties: in these Member States, the non conventional parties were not relevant previously. On the other hand, it draws attention to the diversity of European populism, and it can be concluded that the only common characteristic of these organizations is the anti-establishment attitude. The rise of the Lithuanian Peasant and Greens Union and the Save Romania Union represents not only the demand for left or right wing populism, but also for a kind of ’third way populism’. It is not necessarily radicalism or anti-EU position which makes them popular. They rather focus on specific issues of the country that mainstream parties couldn’t resolve.

While the election results indicate growing political influence of populists in certain member states and in the US, in turn, stagnation and moderate decrease characterised the EU on the level of Member States. It can be observed that political sympathy for populists has generally declined in those countries, where these powers are already deeply embedded in society: in France, Italy, Poland, Lithuania, Slovakia. The greatest shift happened also in the country where populism has the most support, Hungary. In many cases, it was basically the high level of populism which was mildly moderated, thus, despite these drops, in these countries we couldn’t witness the total disappearance
of populism.