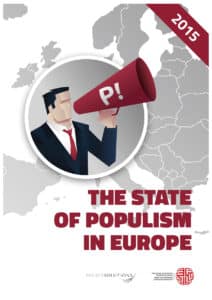 The State of Populism in Europe in 2015

If we wanted to use a single word to describe the political trends of the year 2015, then populism will be definitely among the first terms to come to mind. Not since the beginning of European integration has there been a year in which populist parties have wielded such an extensive influence over the governance of individual member states and the EU overall. Populism is massively gaining ground, and its increasing strength has a substantial impact on the European left in particular: not only because in many countries populists tend to attract traditional left-wing voters but also because established party systems based on the competition between major social-democratic/centre-left and conservative/ Christian democratic parties are undergoing a transformation, with the result that previously bipolar systems are increasingly likely to become tri-polar. Populist parties are emerging as equal challengers to mainstream parties on the right and left, and in some countries right and left-wing populists have become the most important competitors of centre-right parties.

Learning about populist parties will help us in better understanding them, and ultimately also in defending values such as liberal democracy, solidarity and deeper European integration. That is why Policy Solutions and the Foundation for European Progressive Studies (FEPS) have decided to jointly compile and publish a study that analyses changes in the public support for all relevant populist parties and the prevailing trends in European populism.