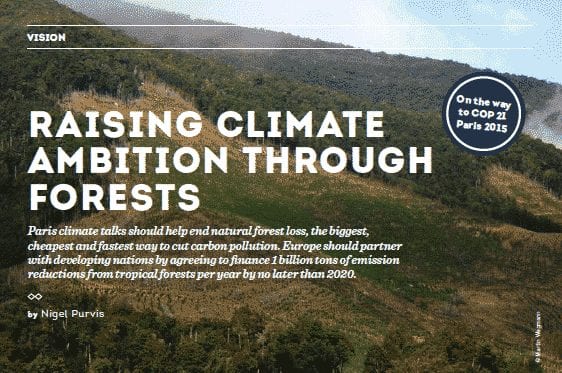 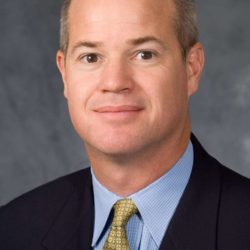 Paris climate talks should help end natural forest loss, the biggest, cheapest and fastest way to cut carbon pollution. Europe should partner with developing nations by agreeing to finance 1 billion tons of emission reductions from tropical forests per year by no later than 2020.

Paris is shaping up to be a major step forward for global climate diplomacy. For the first time, all nations will put forward national plans for tackling their own climate pollution. Nations are likely to agree to new rules that increase transparency and accountability, and that require nations to come forward with new climate commitments every five years or so. This will represent unprecedented progress.

But so far, the national climate pledges countries intend to make by Paris will not get the world on track to limiting global warming to less than 2°C, a goal nations have agreed is essential to avoid potentially catastrophic climate impacts, which would inflict the greatest harm on the world’s poor. Analysis of the unilateral pledges submitted to date shows that Paris could deliver about half the climate action needed over the next decade. That’s good but not good enough. Paris needs to move us from a world of parallel unilateral action to one of genuine international cooperation.

In order to limit warming to less than 2°C, global emissions need to peak soon, plummet 40-70 percent from 2010 levels by mid-century and be near or below zero by the end of the century or sooner. Developed country emissions have already peaked and are now declining; advanced economies need to do more but are heading in the right direction. In contrast, developing country emissions are increasing rapidly. Even if rich countries brought their emissions to zero, the world would still exceed 2°C warming without significant new climate action in developing countries.

But the growth in emissions in the developing world also means the largest and cheapest mitigation opportunities are there, too. It’s far cheaper to build new climate-smart cities and factories in the developing world now than to rebuild and retrofit industrialized economies. Yet it would be both unfair and politically unrealistic to ask nations that have done the least per capita to cause climate change and have the fewest resources to finance the lion’s share of emission reductions. The only durable solution rests on real partnerships between developed and developing nations.

Signs of such a partnership are emerging on forests. Deforestation is one of the largest sources of carbon pollution in the world, contributing more to climate change than all the cars, trucks, ships and planes globally. Stopping deforestation is also the largest, cheapest and fastest solution for reducing carbon pollution. No costly technologies are required to save trees. The cost of conserving carbon rich tropical forests has averaged $2-5 Euro per ton of CO2 over the past few years, many times less than the cost of reducing emissions in Europe or other advanced economies.

Some developing nations are starting to lead on forests, which are increasingly understood to be essential, for clean air and water, drought and flood prevention, and agricultural productivity though pollination and soil conservation. Deforestation often harms local communities, including indigenous peoples, and can contribute to corruption and other illegal behavior.

Brazil has reduced forest loss in the Amazon by more than 75 percent over the past decade; Brazil alone has cut more carbon pollution than the entire EU since 2005. Peru recently committed to ending deforestation by 2021, and Colombia has plans for the largest forest conservation area in the world. And last September at the U.N. Secretary-General’s Climate Summit, over 160 countries, companies, civil society institutions and indigenous peoples pledged to end natural forest loss worldwide by 2030, and cut it in half by the end of the decade. If implemented, this commitment would cut between 4.5 and 8.8 billion tons of carbon pollution per year by 2030 – conservatively, about the same as ending pollution from every car in the world. Some of the largest agricultural commodity companies in the world also signed on, which is enormously important because commodities drive over 70 percent of tropical deforestation.

This New York Declaration was endorsed by Indonesia, Colombia, Peru, Congo, Liberia and many other tropical forest nations, as well as major developed nations such as the US, EU and Japan. In exchange for ambitious forest goals, developing countries received assurances they would receive large-scale economic incentives to help share the cost of action.

In December 2014, fourteen developing countries went further and issued the “Lima Challenge”, challenging developed nations to make good on their pledge. These forest countries highlighted their commitment to do their fair share on their own, and also pledged that by Paris they would quantify the supplemental climate action they would take if developed nations delivered on the promised economic incentives for action. Endorsers of the Lima Challenge included Colombia, Chile, Costa Rica, the Democratic Republic of the Congo, the Dominican Republic, Ethiopia, Guatemala, Guyana, Liberia, Nepal, Panama, Paraguay, Peru and the Philippines, and more nations are coming on board with this approach every month, including India, Mexico and others.

The path to success in Paris is clear. Together, advanced economies and forest nations should articulate a bold commitment to forest conservation – perhaps on the order of an additional three to four billion tons of CO2 per year by 2030 – backed by concrete economic and financial incentives. The EU should take responsibility for delivering on financing for 1 billion of these tons per year by no later than 2020, and the US should make a similar commitment. While these pledges should supplement not offset domestic action, accelerating international action would save many tens of billions of dollars per year for developed nations compared to comparable domestic carbon cuts.

The unilateral emission reduction pledges nations will make in Paris are a good start. But by working together to end natural forest loss globally, nations could go much farther in ways that promote economic growth in both developed and developing nations alike.