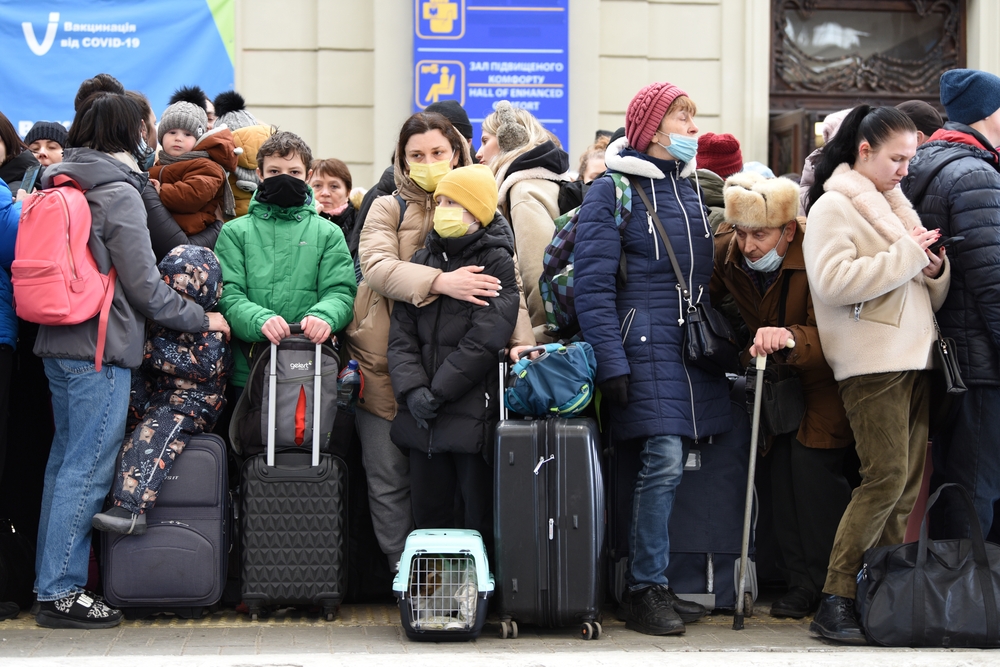 The tragic images of the Russian airstrikes against the Ukrainian cities and the Ukrainian people fleeing their country under the pressure of the invasion shattered the European Unions’ decades-long illusion of uninterrupted peace. The European people seem to have finally awoken to the EU’s rightful geopolitical role and responsibilities. They have welcomed with solidarity the already over 2.5 million Ukrainian refugees seeking shelter within the EU borders (without counting the internally displaced people). Is this a turning point for the EU’s asylum regime?

The condemnation of Vladimir Putin’s attack has been unanimous. The response of the European Union to the war and the humanitarian crisis has been robust and united, as never before. The response of indignant European people has been generous and emotional.

The moment is cathartic. On 3 March, the special Justice and Home Affairs (JHA) decision to activate the EU’s Temporary Protection Directive was historical. Directive 55 dates back to 2001 when it was issued in consequence of the Balkan wars, as an instrument to respond quickly to a ‘mass influx’ of asylum seekers. But it was never used. Thanks to this decision, Ukrainians – who already do not need a visa to enter the EU – fleeing the war do not need to apply for asylum in Europe. They will enjoy protection ‘just’ because they are escaping war. They won’t need to justify their presence and individually defend their right to be granted protection. They won’t need to spend months, sometimes years in camps, going through a lengthy and exhausting procedure, waiting for their reasons to be listened to and judged. They won’t have to fear being returned to their home country because they have lost their documents while precipitously escaping war. And rightfully so. The Temporary Protection Directive is indeed a powerful instrument.

Thus, there is reason to hope that the EU will finally develop a fair and humane refugee protection regime. The European Union may well be at a turning point. Perhaps these two years of pandemics have taught us something, notably that global challenges must be faced together, and that European solid leadership is indeed possible. And yet, one should not indulge in self-satisfaction for at least two orders of reasons.

First, the war in Ukraine could be a long and draining one. Given the uncertainty around Putin’s actual goals and the risks connected to an escalating conflict, this is difficult to estimate. The number of Ukrainian refugees arriving in the EU, which with unprecedented speed has already topped any previous European record since World War II, could reach 4 million. Against this background, the risk of the member states giving in to divisive temptations is always behind the corner, particularly if sanctions against Russia will hit back European economies. At the same time, the way towards a solid European asylum system founded on solidarity (to the asylum seekers) and responsibility-sharing (with the other member states) is still steep. Last week’s declaration by the European Council summoned in Versailles does endorse the Commission’s proposal for Cohesion’s Action for Refugees in Europe (CARE), but it says nothing about further measures.

Recent history has taught us that such big-hearted manifestations of solidarity may not last long. Only a few years have passed since German and Austrian people welcomed Syrian refugees at the train stations in Munich and Vienna, and Angela Merkel pronounced the fateful words “Wir schaffen das!” Those words are now indelibly linked in our memories to one of the deepest political crises the European Union has faced since its establishment, which, in a perverted narrative tweak, we keep inappropriately calling ‘refugee crisis’, conferring to a purely internal crisis, triggered by divisions among member states, an external connotation. As the Syrian civil war continued, the European people’s solidarity quickly faded away, leaving room to intolerance and xenophobia. In the long term, similar dynamics could unfold this time again.

Moreover, nobody has overlooked the fact that the EU countries that, for geographical reasons, are now at the forefront in the reception of refugees from Ukraine – Poland, Hungary, Slovakia, the Czech Republic – are the same ones that, until yesterday, i) were immovable when it came to relocating refugees, ii) have repeatedly adopted policies, such as border push-backs against migrants and refugees and detention measures, which are inhumane and against international law, and iii) have consistently indulged in an arrogant anti-migrant and racist rhetoric.

Given these premises, let’s not forget that migration may be easily turned into a powerful destabilising tool in the European Union. Putin is probably counting on this effect of the war to weaken the EU’s response and exploit divisions among the EU member states. Besides, let’s not forget the miserable show offered by the European Union only last year at the occasion of the EU-Belarus border crisis.

The second order of reasons not to indulge too much in self-satisfaction concerns the blatant double standards of the EU’s reception of refugees. One may ask why the Temporary Protection Directive was activated now? Was the situation not serious enough in 2015/16? What about last summer’s crisis in Afghanistan? The answer to these questions is manifold. The directive needs a qualified majority (not even unanimity) to be activated. But as the political willingness was lacking, and the very definition of mass influx was ambiguous, the European Commission never activated the directive before. War on the European continent has triggered more fears and emotions than a relatively far away conflict may have. And yet, the suspicion that the difference between today’s humanitarian crisis and the previous ones mainly lies in the colour of the skin and the god prayed by the refugees is indeed very strong.

Together with Ukrainians, many third-country nationals are currently leaving the war theatre. Africans, Indians, Bangladeshi, and Ecuadorians face the same dangers and run the same risks as the Ukrainian people. Still, they often do not enjoy the same treatment at the EU borders as the Ukrainians do.

Against this backdrop, is there a reason for the hope that the European Union will finally change course regarding asylum and migration policies? Such changes do not happen overnight but take years, if not decades, to unfold, but the current humanitarian crisis could actually bring about this long-needed turn. The momentum should not be wasted. If the EU manages to deploy a functioning asylum regime for the present humanitarian crisis, the (moral and practical) lessons learned – by the Union, the member states, and the European citizens – could represent the political basis on which to finally build the long-awaited and needed reform of the asylum system.