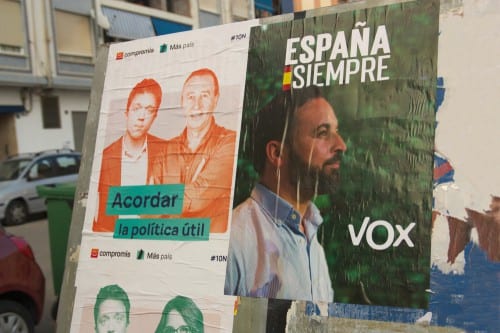 The repetition of the general elections that took place on Sunday, November 10th, has shown that Spain stays where it was… although a little worse.

The radicalization of the right has destroyed the centre-right and propelled the extreme right to the third place, with 3.6 million votes and 52 seats in parliament (on April, they had entered the chamber for the first time with 24). Vox has profited of the many crisis that remain open in the Spanish political system: clearly the territorial crisis, with the surge of a powerful pro-independence movement in Catalonia, but also, and similar in importance, the social and political crisis in which has transfigured the economic crash of 2008.

Spain stays in a limbo for at least the last five years. The democratic system built at the end of Franco’s dictatorship turn 40 last year and needs a deep reform. That is what the Socialist Party lead by Pedro Sánchez tried to push trough since it took office in the summer of 2018 after a negative vote against Popular Party prime minister Mariano Rajoy.

Rajoy’s government, who took office after the economic crisis blow the Socialist cabinet in the 2011 general election, did nothing to face the so needed reforms of the Spanish political system. Neither in the social front (where PP took the strongest way of the austerity politics), or the deepening of democratic values (the end of Rajoy’s cabinet was due to a corruption scandal), nor in the territorial front (with PP in office the preference for independence among Catalan voters scaled from 30% to almost 50%).

During this period, discontent with traditional politics has made emerge two new political forces that shared the aim of regenerating the political system: Podemos on the left and Ciudadanos on the centre. Both have managed to capture a significant fraction of the vote (a third in 2015, 2016 and 2019 general elections).

After his election, Sánchez’s Socialist cabinet deployed a reformist agenda with the backing of the left (Unidos Podemos) but with a strong opposition of the right, not only PP but also the centrist Ciudadanos, and the pro-independence Catalan parties. Both them, the right and the pro-independence parties, voted against the annual budget and led to elections in April, repeated in November because of the impossibility of building a majority to invest a government.

After that new election Socialists and Podemos has settled and agreement to build the first coalition cabinet in Spanish history since the 1930s. A cabinet with the goal of pursuing the reformist agenda to reconnect the Spanish political system with long segments of Spanish society that have been left out of politics. It is not only a question of economics (minimum wage, elderly people’s income) or even cultural (feminism, restoration of the memory of Franco’s victims). It is a new beginning, a way to build a sentimental connection between the new generations of Spaniards, those who did not live the restoration of democracy and represent seven out of ten of Spanish society.

Sánchez’s PSOE has the duty of rebuilding a big consensus in a society where trust in politics is in a minimum level, where the right has radicalized and it is leaded by Vox, where the Catalan pro-independence movement do not accept to participate in this effort. Despite all these problems, the Socialists are eager to propose a new agreement for social justice, democratic values and mutual understanding. There is no other way to start again for Spain.