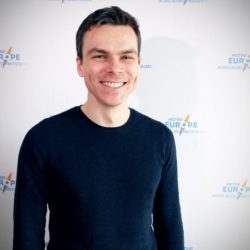 Countries like Germany and Austria even invested in constructing new Russian gas infrastructure, with the controversial Nord Stream 2 pipeline. Only a handful of countries, including Estonia, Latvia, Lithuania, and Poland, chose to prepare for a Russian energy disruption.

And here we are. More than 100 days into Putin’s open war on Ukraine, with €60bn of European money shipped to Russia to buy its fossil fuels (€35bn for oil,€25bn for gas, €1,5bn for coal) – that is the size of the annual Russian military budget. Therefore, Putin’s war on Ukraine is a hydrocarbon war: a war financed by hydrocarbon money.

The European Union can make Putin’s war on Ukraine materially impossible by stopping to pay for Russian fossil fuels. So far, it has delivered too little too late: a complete embargo on coal next August, a partial oil embargo on oil making its most significant effect next year, and nothing concrete on Russian gas at this stage. Good foreign policy begins at home. With the REPowerEU strategy, the European Commission opens avenues for sound energy policy decisions to free Europe from Russian fossil fuels.

In 2019, 25 per cent per cent of EU energy came from Russia. Ambitious domestic policy can get us a long way to 0 per cent per cent. To do this, we would need nothing less than a general mobilisation to save energy and deploy renewables that combines immediate changes in behaviours (energy sufficiency) and a historical deployment of energy efficiency and renewables.

Energy sufficiency. We can reduce energy demand through changes in individual and collective behaviours. Vast energy sufficiency campaigns have the potential to cut demand by around 15 per cent, as Japan did with its 2011 Setsuden campaign. This includes generalising the practice of putting a sweater at home in winter to cut heating, stopping wasting energy to heat outdoor terraces, reducing the maximum allowed speed on highways, limiting air travel, etc. Here, the challenge is strictly political. To build political consensus in European societies, national governments must first tell the truth – that we already risk severe energy supply cuts in the next winter; and ensure the wealthiest and most powerful shoulder the greatest part of the effort.

Energy efficiency and renewables are vital to Europe’s future. The EU has already managed to reduce its energy demand by 10 per cent between 2006 and 2019, and we should do more. Indeed, the deep renovation of a building cuts its energy consumption by 60 to 90 per cent. The same goes for renewables. This is especially the case for renewable heat: solar heating systems and heat pumps can be quickly deployed to scale-down EU gas consumption. In other words: “send Putin away, buy a heat pump today!”.

Yet, if energy efficiency and renewables are quickly deployable at the individual level, it takes months and years for energy efficiency and renewables to be deployed at scale; to reach, for example, the new target proposed by the European Commission that 45 per cent of the EU energy comes from renewables by 2030. Hence, the European Union’s top priority today should be to renovate as many oil and gas-heated buildings as possible and install as many renewables as possible before the next winter comes. This helps relieve the pressure of high oil, gas, and electricity prices; and protects Europeans from catastrophic climate change by reducing greenhouse gas emissions. It compels to declare building renovation and renewable energy as national security priorities and to ensure it can benefit from special legal treatment whenever necessary: faster issuance process of renewable energy installations permits, with trade union approval, increase of the maximum legal working time for workers who have the skills to perform these works, and train new workers.

Since 2014, with the wars in Donbas and Yemen, we have been living in a world where aggressive dictators use their fossil fuel revenues to bully their neighbours. A European general mobilisation around energy sufficiency, energy efficiency and renewables, is critical to reducing their capacities to act as they wish. While limiting Putin’s capacity to realise a military victory in Ukraine must remain the top priority for EU policy-making in the coming years, a general mobilisation for energy savings and renewables is also a way to combat inflation, energy poverty and climate change. All this while speeding up the necessary energy transition and rightfully glorifying those millions of European workers who, from solar heating systems manufacturers to building renovation workers, make the green transition a reality.

The time has come to show how concretely the European Green Deal is an existential component of a European integration project of peace and freedom.