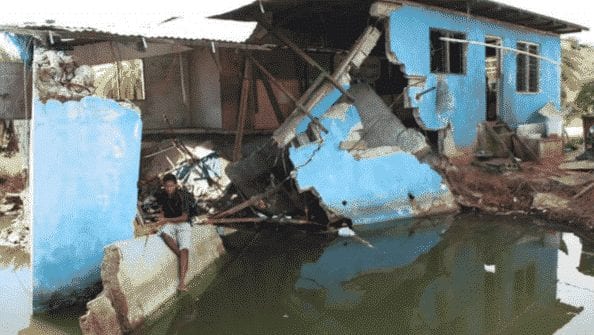 The main reason for the lack of a definition of what is meant by migration caused by environmental degradation or change is linked to the difficulty in isolating environmental factors from other drivers of migration. Have we made any progress on this definition? Yes and no.

There is still a difficulty in isolating the environmental factors, but no one seems to deny the importance of these as a reason for people being displaced. The concept of ‘environmental migration’ is now a common feature in migration studies an the number of research projects, workshops and conferences has vastly expanded. At the same time, the concept of ‘environmental refugees’ or ‘climate refugees’ has been progressively abandoned, as it had not legal grounding.

The Anthropocene, as a geological epoch, remains a disputed concept amongst geologists. According to its advocates, it signals a new geological era, the Age of Humans

Politics in the Anthropocene

The Anthropocene, as a geological epoch, remains a disputed concept amongst geologists. According to its advocates, it signals a new geological era, the Age of Humans, where the latter have become the major force behind transformations of the Earth. We also need to be aware that the Anthropocene could also be seen as an operation that de-politicises subjects.

The Anthropocene, the ‘Age of Humans’, should indeed rather be described as the Oliganthropocene – the age of few men and even fewer women, to use an expression coined by Erik Swyngedouw (2014). If humans have indeed become the principal agents of changes on this planet and overwhelming natural drivers of changes, most humans are actually the victims of these changes and not their agents.

Migration as a commodity

As the concept of ‘environmental migration’ gained currency, migration became perceived less as a decision of last resort that people take when they have exhausted all possible options for adaptation in their place of origin and were left with no other choice. We insisted that migrants should not be perceived as resourceless, expiatory victims of climate change, but rather as resourceful agents of their own adaptation. We argued that migration could indeed prove a powerful adaptation strategy: migrants could diversify their incomes, alleviate environmental pressures in the region of origin, send remittances or simply put themselves and their families out of harm’s way. And this view was soon embraced by many institutions and organisations. Better still, it made its way into the international negotiations on climate change. In 2010, the Cancun Adaptation Framework included, in its Article 14 , the ‘measures to enhance understanding, coordination and cooperation with regard to climate change induced displacement, migration and planned relocation (…)’

The movement of people was no longer a matter of migration policies, but rather of environmental policies – an adaptation strategy.

Why we let migrants down

There is something that we had left out in this process of ‘de-victimisation’ of migrants: we had used environmental changes as a Trojan horse to ‘de-politicise’ migration. A fundamental difficulty in the collective action against climate change is that those who need to undertake most of the effort to cut green- house gas emissions – the industrialised countries – are also those that will be comparatively less affected by the impacts of global warming. From a rational, neo-liberal perspective, industrialised nations have thus little incentive to act: our agency is denied by our interest.

A particular example attests to this process of de-politicising migration through an environ- mental perspective. In the press and in public debates, those uprooted by climate change were once often called ‘climate refugees’. Legal scholars and international organisations, however, have been very keen to dismiss the term, which had no legal grounding (McAdam 2009). Most of the scholars have logically agreed not to use the term and to use more clinical terms such as ‘climate-induced migrants’, ‘mobility in the context of climate change’, etc. I was one of them, and I think I was wrong. By foregoing the term ‘climate refugee’, we had also depoliticised the reality of these migrations. A central element in the concept of ‘refugee’ is persecution: in order to qualify as a refugee, you need to flee a persecution or to fear a persecution. And foregoing the term ‘climate refugee’ is also, in a way, foregoing that climate change is a form of persecution against the most vulnerable.

The Anthropocene, as a concept, might produce the false impression of a unified humanity, where all humans would be agents of change on the planet.