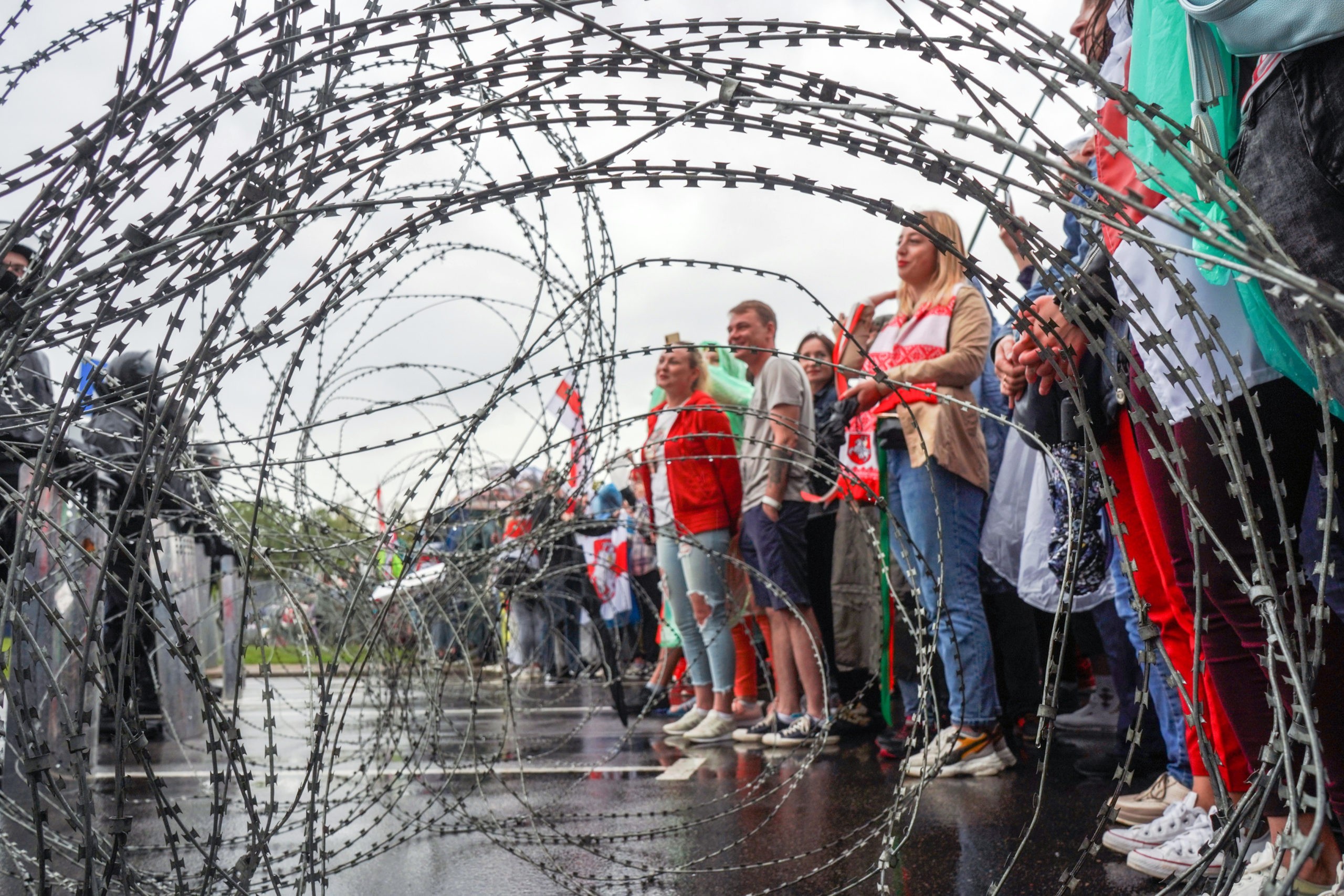 The mass mobilisation in Belarus in 2020, like Ukraine’s 2004 Orange Revolution, is a form of post-electoral protest. The mobilisation was triggered by state repression against the opposition and blatant falsifications of the 9 August presidential election results.

Several factors contributed to the politicisation of Belarusians. The new opposition conducted an efficient agitation campaign against the backdrop of numerous miscalculations by the authorities. These miscalculations included the registration of a presidential candidate, Sviatlana Tsihanouskaya, whose potential was underestimated, and repression by the state begun in the early stages of the campaign. Growing numbers of citizens took to the streets following three days of violence against peaceful protesters on 9-11 August, including torture and ill-treatment in temporary detention centres. Other triggers for spikes in protest activity included the use of tear gas against the elderly on 12 October, an ultimatum by Tsihanouskaya that expired on 25 October and the recent death on 12 November of the peaceful protester Raman Bandarenka, after he was beaten.

There is a need to analyse the deeper causes of this unexpected mass mobilisation. It surprised the EU, the Kremlin, President Alexander Lukashenko himself, and even parts of Belarus’ opposition and civil society. Why was a critical mass reached after these elections and not after the previous in 2015? The previous election was also marked by irregularities and falsifications, yet it was conducted in an atmosphere of apathy more typical of authoritarian regimes. Contrary to it, the election of 2010 ended up with a protest but which involved a very small part of the population, supporters of the traditional  opposition.

The 2010s: A deteriorating economy

The mobilisation of 2020 plays out against the backdrop of a decade-long stagnation of the Belarusian economy, according to the research centre BEROC. The decade was marked by a much slower growth of GDP in comparison with the 2000s, not only because of the authorities’ refusal to conduct much-needed economic reforms, but because of the gradual reduction of Russian subsidies, in the form of preferential prices for oil and gas. Each successive reduction in subsidies, in a series of ‘hydrocarbon wars’ with Russia since 2007, hit the economy harder.

Furthermore, the Belarusian population, despite the refusal, for a long time, by the authorities to sign a facilitation agreement on Schengen visas with the EU (which made such visas expensive), has received among the highest number of Schengen visas per capita in the World. Travelers could witness for themselves the growing income gap with neighbours like Poland and the Baltic countries. According to the economist Kateryna Bornukova of BEROC, the wages gap between Minsk and the regions has also been growing over the last decade, which created a fertile ground for politicisation by the opposition and provincial bloggers, while previous post-electoral mobilisations in Belarus (2006, 2010) took place only in the capital Minsk.

A maturing Belarusian society: ‘charka i shkvarka’, booze and lard, are no longer sufficient

Despite this gruelling economic backdrop, the protesters have no economic demands, which points to other changes within the Belarusian society. Previously, the majority of the population accepted the social contract proposed by Lukashenko, which can be crudely expressed as ‘receiving social rights (a small pension, low unemployment rate, subsidised prices for some products and services) in exchange for limited civil liberties (right for peaceful assembly, freedom of speech) and non-participation in politics’. This contract has now been challenged. The protesters’ demands are strongly political: holding a new – and, this time: free and fair – election, and the reestablishment of an impartial judiciary. And the more the state violates people’s civic rights, the more the protesters demand them. As repressions against independent media grows, protesters’ posters increasingly carry a demand for freedom of the press and free speech.

Lukashenko has always promoted a system in which citizens rely on the state to provide them with an education, a job, and medical assistance. He presents himself as a defender of simple Belarusians in the face of external enemies, the opposition, and even the bureaucrats from his own regime. However, his ‘paternalistic’ image has suffered in recent years, which may be due to diminishing financial resources and/or a loss of political intuition.

In 2017, the authorities introduced a decree on “social parasites” according to which people who are unemployed for more than half a year had to pay a heavy fine – the decree sparked protests and was quickly cancelled. During the first wave of Covid-19, which could also be identified as one of the triggers for the current mobilisation, Lukashenko not only refused to acknowledge the dangers of the virus and shamed the victims (claiming those who were ill had chronic and were destined to die soon anyway), which undermined his self-proclaimed image as a defender of people, but he also refused to support private businesses to the frustration of entrepreneurs.

As the state refused to take care of its citizens, numerous society initiatives appeared that helped doctors and vulnerable groups, solidarity appeared among neighbours and colleagues. This solidarity and self-reliance, which became far greater as the pandemic unfolded, dates back to the appearance, after 2015, of several crowdfunding platforms (MaeSens, Ulej) and crowdsourcing (Talaka) for financing social and cultural projects. Created by people who were new to civil society, often from Belarus’s growing IT sector and private business, this reveals a growing Belarusian middle class that does not depend on the state.

Another deep root of the mobilisation is a generational shift withing the Belarusian society. Younger generations, who did not live in the Soviet Union, feel no nostalgia towards the Soviet period. They no longer identify themselves with the political and socio-economic model promoted by Lukashenko, which stems from the Soviet system. Furthermore, many of those who fearlessly took the streets on 9 August and ever since, are described by some members of Belarusian civil society as an “unbeaten generation”. Indeed, the previous period of particularly strong repressions in Belarus, between late 2010 and 2012, followed the 2010 presidential election. Since then, as the Belarusian authorities sought to improve relations with the West from 2013, they abstained from jailing political opponents, members of the NGOs, business and private media, and in most cases imposed heavy fines and short-term administrative arrests instead. Fundraising platforms like MolaMola were also active in assembling funds for activists to pay their fines, for instance for participation in demonstrations against deepening integration with Russia in December 2019.

Indeed, another recent mistake by Lukashenko was his voluntary participation in these integration negotiations. This tarnished his image as a defender of Belarusian sovereignty and independence, an image he had been cultivating in the 2010s in the context of commercial conflicts with Russia and the latter’s military interventions in its direct neighbourhood (in Georgia in 2008 and Ukraine in 2014). His negotiations went against the grain of a growing number of Belarusians favouring independence from geopolitical unions: a view expressed by more than 60 percent of the population in December 2019 according to a poll by the Institute of sociology of the Academy of science. In the 2015 presidential election the ‘Ukraine effect’ was strong and Belarusians feared a replay of the violence seen during the Euromaidan of 2013-2014. By 2020 this effect had faded, as had Lukashenko’s image as a defender of ‘stability’.

Lukashenko has long secured the support of an important part of the population thanks to control over the state media. However, another long-term cause for the emergence of the mobilisation in 2020 is the spread in Belarus of internet and social media. According to “Hootsuite”, as of January 2020, 79 percent of Belarusians are internet users (higher than in Ukraine and Georgia, with respectively 63 and 68 percent) and 41 percent are active users of social media. According to the same report, the independent news portals tut.by and onliner.by are among the most visited websites. While the coverage of the pandemic by the state media during the first wave in the spring 2020 was far from satisfactory, it made even more people seek reliable information from alternative sources.

Another factor is the growing use of Telegram channels in Belarus. This messaging application has won hearts in Belarus for two main reasons: it enables communication on a very large scale and functions even when the state blocks the internet.The emergence of the 2020 mobilisation in Belarus can thus be explained by a juxtaposition of several deep causes of socio-economic nature, enhanced by unexpected triggers such as the pandemic and new opposition leaders. Furthermore, the popular mobilisation continues because these deep causes do not only not vanish, but they keep increasing. Self-reliance, and a horizontal, solidarity-based low-level democracy is gradually developing as the Belarusian population faces very harsh repression. The economic situation is rapidly degrading as Lukashenko finds no foreign allies to sustain the Belarusian economic model. The state media further loses its audience. The authorities, unable to return to the desired status quo, align mistakes, which further motivate the protesters.