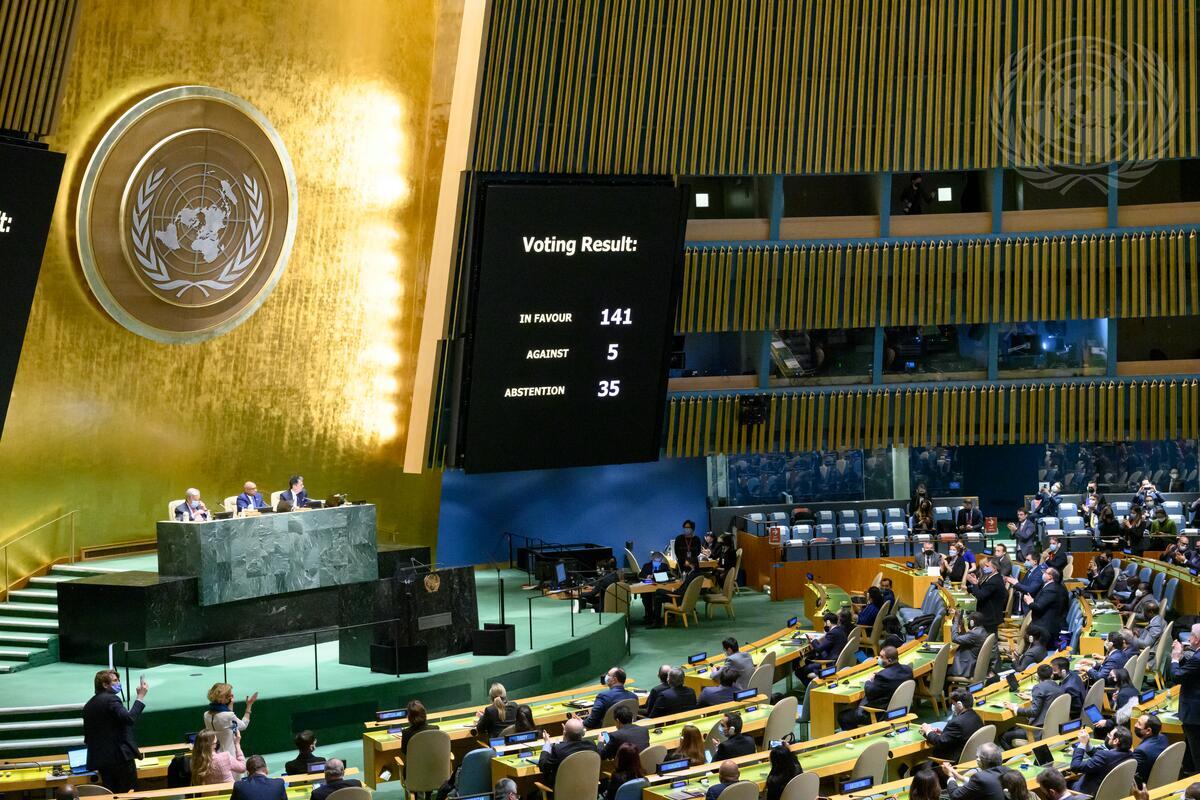 In front of many incredulous eyes across the world, the Russian president Vladimir Putin has deployed a full attack on Ukraine. The attack is in line with his long-maturated plan to build a Eurasian sphere of influence. According to his narrative, which takes its roots in the experience and the legends of the Russian empire, Ukraine is not a real nation. The country’s regions with a majority of Russian-speakers should become independent or be outrightly annexed by Russia. And Ukraine’s desire to move towards the European Union should be crushed.

‘De-militarisation’ and ‘de-nazification’ of Ukraine have been announced as Putin’s goals in the international media and proclaimed in the United Nations to cover his real ones: to remove Ukraine’s democratically elected powers and to replace them by instrumental puppets for his grand chessboard plan. And to deter their potential allies, Putin went the farthest he could with a widely broadcasted choreography instructing his generals for the ultimate argument: nuclear missiles. This is the full face of tyranny in the 21st century. But this can backfire.

The bravery of the Ukrainian response galvanises solidarity across the world. This nation is asserting itself in full dignity, upholding its values and democratic choices, caring for each other and defending its sovereignty with its own arms. The dream they are fighting for is very simple but powerful: freedom, democracy, prosperity – and joining the European Union.

All this shows the appeal of the European project, and the European citizens be should proud of this. For some days, the EU institutions were divided and hesitating on the level and scope of the response to be deployed. Now they started raising the level of response: organising channels to receive large flows of refugees in all member states and providing weapons to Ukrainian troops; diversifying the financial sanctions to hit not only some key Russian actors, but also to block operations by the Russian banking system and to reduce the Russia financial reserves; reducing dramatically the EU dependence from Russia on oil, gas and other raw materials and disabling Russian access to advanced technologies. A swift and decisive action is indeed necessary to impose high pressure on the Russian financial and economic system which might trigger a larger wake-up reaction from the Russian population against this disastrous war. This should also set another balance of power to define the terms of a negotiated way out, when this comes.

This is the bonfire where the European Union is emerging as a more geopolitical actor in defence of its own values, way of life and in support of its neighbours. Now this is the time – in the upcoming European Council and European Parliament meetings – to draw the consequences of all this and to build up the European defence capabilities, including in cybersecurity, a green Energy Union, a European industrial policy, and a coordinated European asylum system.

The EU should also be prepared to pay the financial and economic costs for its tough measures regarding Russia. But they should be offset by extending a stronger European budgetary capacity as well as the escape clause for the national budgets. Most of all, the costs should be accepted with the deep conviction that higher goals are enough to justify the unavoidable sacrifices.

The global order is also being reshaped by the Russian invasion of Ukraine. The international isolation of Russia was made crystal clear by the last vote of the UN General Assembly resolution condemning this invasion with the support of 141 countries out of 193 and a standing ovation in the chamber. Russia was only joined in voting against the resolution by Belarus, North Korea, Eritrea and Syria. In the UN Security Council, Russia stood alone in voting against the resolution.

China is being put to a test: will it turn a blind eye to it and go on nurturing its partnership with Russia or will it be consistent with its alleged position of rejecting foreign military intervention against sovereign nations? The US under President Joe Biden’s leadership is taking a clear stance against Putin’s aggression, and it is careful to involve a large range of allies in every step of the way. But what will this way be? At the time I am writing, nobody knows. A range of different and very contrasted scenarios are still possible:

– a military defeat of Ukraine with the decapitation and replacement of the current democratic power, absorbing this country into the Russian sphere of influence,

– a fragmentation of Ukraine’s territory with the independence or annexation by Russia of its regions with a Russian-speaking majority,

– after a longer or shorter war, a victory of the Ukrainian resistance, that would move on reconstructing the country and adapting the political system to deal with the country’s internal diversity and preparing the negotiation for EU membership.

NATO membership might be more problematic even if any military retaliation against Russia is completely off the radar of Western intentions. This is just another threat imagined in Putin’s nightmares.

The Ukrainian heroism has been the turning point. Just see how President Volodymyr Zelensky speaking from his bunker in Kiev received a standing ovation in the European Parliament. The level of EU unity will also be a critical factor to decide about the aforementioned scenarios. The shift of Germany under the progressive leadership of Chancellor Olaf Scholz was a very important moment. The EU’s High Representative for Foreign Affairs and Security Policy Josep Borrell, the EC Vice-President in charge of the Green Deal Frans Timmermans, and the Commissioner in charge of Asylum and Migration policy Ylva Johansson have now better political conditions to move on with plans which were facing hesitations from several member states. The EU can and should re-create itself.

The EU should rise as a political entity and rescue a European democratic nation from foreign tyranny. What is at stake is not only Ukrainians’ fate, it is a rules-based global order and the future of the European project.