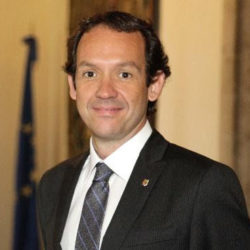 Europe has gone through difficult times in recent years. The outbreak of the Covid-19 pandemic in 2020 has challenged global governance and the international cooperation mechanisms in place. The Covid-19 pandemic has been a litmus test in which EU member states have had to look after their own interests, while also having to safeguard cooperation, since this has been key to the success of overcoming the pandemic. Thanks to cooperation, we have managed to get a vaccine in less than a year and administer it to 90 per cent of the population in less than two years.

Unfortunately, in 2022, we have had to face the unknown once again. Or at least an ‘unknown’ for this century: war in Europe. Russia’s invasion of a sovereign country has redistributed the checkers on the international board, and has again shaken the foundations of the European Union. We have once again been forced to make difficult, complex and, above all, novel decisions. The international sanctions on Russia, the shortage of products, the rise in fuel prices and the uncertainty of Ukraine’s future have all led to a new landscape of global governance where major decisions have been taken in common. While in 2010 the EU was questioned due to its austerity prescriptions to address the economic crisis, this time ‒ initially with the pandemic and now with the Ukraine crisis ‒ we have witnessed a totally different European Union. This is evidenced by the Next Generation EU fund, a direct injection of funding to member states for projects aimed at transforming and modernising the country. In the case of Spain, this implies 140 billion euros, out of which more than 60 billion will be non-refundable transfers.

But, undoubtedly, the most difficult challenge Spain – and other European and non-European countries – have faced is the surge in fossil energy prices, and, therefore, of electricity. A situation that has quickly affected our everyday life.

The restriction on the consumption of gas from Russia, on which Europe, and particularly the Northern European countries, is highly dependent, due to the sanctions and the geopolitical reconfiguration, has forced us to search for more expensive alternatives, such as getting the gas from other farther-off and more challenging to reach places. And not only that: given the functioning of the auction-based system in the electricity market and the fact that gas is the most expensive energy source and therefore the last one to ‘enter’ the auction and the one setting the price for the whole lot, price regulation has caused electricity prices to soar in Europe. At times, they have even doubled or tripled in some days, even though the real need for gas was minimal.

This situation, which is very complex to handle due to the little room for manoeuvre to bring down electricity prices, has caused Europe to take into account, for the first time, the inequalities between member states in their cost-sharing. For example, Spain’s reliance on Russian natural gas, at barely 10 per cent, is far lower than that of countries such as Germany or Poland, whose energy mix from Russia often represents over 50 per cent. Nevertheless, Spain has been working on reducing the costs of the electricity bill since energy prices began to rise.

An additional and critical starting point is that both Spain and Portugal have made a firm commitment to renewables in recent years; increasing, in the Spanish case, from less than the 40 per cent of the total electricity production ‒ already a high starting point in comparison to other partners ‒ to almost 46 per cent these days. A particularly clear example of this commitment made by Prime Minister Pedro Sánchez since he came to power in 2018 is that, at that time, solar photovoltaic energy production, a plentiful natural resource in Spain, was just over 4,700 MW and, currently, in 2022, we have more than tripled the production to over 15,000 MW. This is a radical change, of course, compared to the previous policy of former PM Mariano Rajoy’s right-wing People’s Party, which introduced an excise duty on photovoltaic production for self-consumption that was later eliminated when the Spanish Socialist Workers’ Party came to power.

Since 2018, Spain has done its homework and has become one of the European countries where energy transition in favour of renewable energy sources is most strongly promoted. This also puts us in a position to definitely close down all nuclear power stations by 2035.

It has been possible to reach an agreement on the Iberian exception because, besides the shift in perspective of the European Union decisions in the face of the crises mentioned before, Spain and Portugal have a very low connectivity with the rest of Europe, of about 2.8 per cent. This situation creates an ‘island effect’. It is also worth mentioning that, within that framework, enjoying an exception in the electricity price calculation formula does not distort the entire European market as our connectivity with them is so low that it does not favour exports.

This Iberian exception, obtained together with Portugal, sets a historical precedent in Europe. Furthermore, it acknowledges the Iberian energy policies for the growth of renewable sources, thanks to the excellent work of the Spanish and Portuguese governments. It is also innovative in the social sphere, since, for the first time, we will have an energy price regulating mechanism that will not burden consumers. It is based on a reduction in undeserved income for electricity companies.

It opens the door to a much more complex and deeper discussion within the European Union: the need to consider other calculation formulae promoting energy prices better aligned with the market reality. For instance, the need to decouple the gas from the electricity pricing criteria. This might be the next step.

The Iberian energy island, which materialises the agreement reached by Pedro Sánchez and Antonio Costa in the European Council, sets a key precedent in the European Union, since it opens a new path, a much more encouraging one than others that have been taken in the past. The Spanish government has always aimed to protect the most vulnerable among citizens, the industry, and small and medium-sized enterprises.

Citizens must be put first, and the Spanish government, along with the necessary collaboration of our European partners, will keep working in this direction.