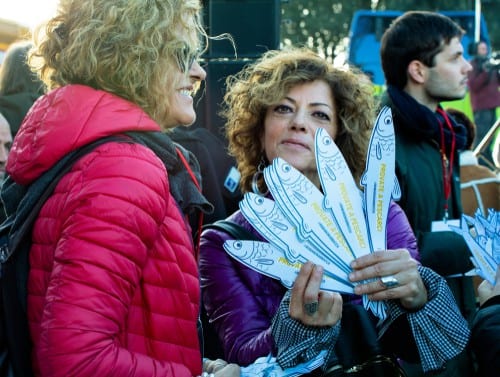 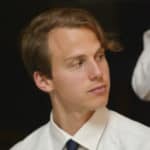 The Sardine movement in Italy sprung into life when a small group of 30-years olds met on a rainy night in Bologna in the middle of November 2019. That night, the far-right Lega planned to officially kick-off its electoral campaign for the regional elections in Italian region of Emilia-Romagna, which were due to take place on January 26th. The Lega’s communication campaign however, had already started a couple of weeks before. The city was full of posters showing the face of former interior minister Matteo Salvini accompanied by some key messages aimed at showing that regional and national problems could be solved by using simple political slogans.

The small group decided to create a Facebook event that would take place at the same time the Lega kick-off event was scheduled. The movement was called ‘6000 sardines’ because they thought Bologna’s main square could hardly contain more than 6000 people at the same time – the idea was to stick and stay close like a sardine in a tin. Why precisely 6000? Because at the same time, Salvini had organised a political rally inside of an auditorium with a capacity of approximately 5600. The idea was to show that in Bologna there were more people against Salvini than in favour of him. Eventually there were more than 14.000 in the square, coming from all over the region. The massive mobilisation was a first signal. The Lega could be beaten without investing a single Euro on social media, just by bringing together people in a square.

The message was clear and started to spread immediately. People should understand that Salvini was not even running to become the Region’s President – the Lega’s candidate was actually Lucia Borgonzoni. Salving however was using his popularity to lead the campaign all over the province, trying to catch as much attention as possible and keeping the real candidate – who was unpopular – in the shadow.

Emilia-Romagna is the most advanced and developed region in Italy. It is known as the model for positive values such as hospitality, integration, sharing and openness. There is no need for a political U-turn that could only cause damages. In addition to this, the Lega planned to use it’s a successful campaign in the Region to get ready for the next national elections (not scheduled yet but highly likely to happen soon).

“At the previous Regional elections, the turnout had been only 37%, a massive defeat for politics in general. This time around the turnout shot up to 68%”

The Sardines aimed at indirectly support and promote the current president of the Region, Stefano Bonaccini, a man with centre-left values, who was running again for re-election. But the Sardines’ goal was also to stimulate people’s interest in politics and to convince them to go to vote. At the previous Regional elections, the turnout had been only 37%, a massive defeat for politics in general. This time around the turnout shot up to 68% – a substantial increase than in the previous election.

From Bologna to Italy, history of a phenomenon

Starting from that day in mid-November, people all over the Region – and soon all over Italy – organised Sardines gatherings in the main squares of cities. From big cities like Florence, Turin and Naples to smaller ones like Sorrento, Ravenna and Lecce. The phenomenon acquired a national dimension that was totally unpredicted and unplanned.

Italians found hope and realised that they were not alone in the fight against the raise of populism. Italy is not a fertile country for the seeds of hate, discrimination and disinformation. It is instead fertile for the seeds of integration, acceptance and sharing.

“The vision of the society according to the Sardines puts people at the centre.”

Over 100.000 people gathered in Rome, over 40.000 in Turin and over 30.000 in Florence. The real opposition to the Lega were not the left-wing political parties – but the Sardines. The movement always kept a distance from the idea of being of a political entity, it wanted to be identified as something different, something new. Nonetheless, since the beginning, it was clear that the phenomena was of political nature, but non-partisan.

The vision of the society according to the Sardines puts people at the centre. Individuals have complex issues that cannot be solved by the simple slogans of some right-wing parties. For example, by suggesting that in order to solve the migration crisis it’s enough to close all Italian harbours and make it impossible for migrants to reach Italy’s shores.

The Sardines expect politicians to be more reliable and to make political promises that can be kept. On the other hand, voters need to ask for more, need to get more involved into politics and to understand that they have the right to vote but that they also have the duty to be an active citizen. By gathering in a square people are doing politics without being aware of it, they are showing a political will. And politicians need to understand that people do not feel represented by the current way of doing politics.

In the run-up to the elections on Sunday, 26thJanuary, the Sardines have organised manifestations in more than 160 cities all over Italy. Almost 1 million people have taken to the streets.

In the Region of Emilia-Romagna, where it all started, the Sardines have not only occupied the central squares of the big cities, but they have done so in small villages on the Apennines as well as in the middle of the country side. Those remote areas are known to be places where populism raises faster, and the Sardines expressly decided to reach those citizens that often are abandoned by politicians.

The movement will go on regardless of the election results. In the next months, other regions are expected to vote and the Sardines will play a role in that. The Sardines are the antidote to right wing populism. In mid-March there will be a national gathering of the movement aimed at defining a shared vision for Italy.

The Sardines could become a key player everywhere in Europe and the world. Today, we are witnessing a raise of right-wing movements that promote exclusive societies, disinformation and hatred. The Sardines were born to counter this drift, to inspire and encourage people to stand against populism.