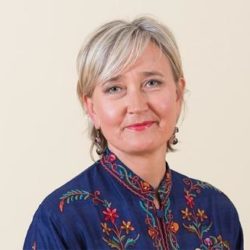 A war is raging in Europe. Russia’s attack on Ukraine continues. There are calls for peace negotiations. Of course, peace is important, but should it be peace at all costs? It is not just a question of the shameful occupation of the territory of a sovereign state, which the aggressor initiated on 24 February, because the annexation already started eight years ago when Crimea was declared part of Russia. Back then, the world turned a blind eye to the aggression. Today’s brutal military action is no longer ignored in Europe. Today, many other serious questions have been added about who will pay, and how, for the usurpation of the souls and bodies of Ukrainian women.

As of November, the number of Ukrainian refugees in Europe amounts to 7.8 million. Add to that the number of internal refugees, and all in all, a third of the Ukrainian population has been forced to abandon their homes because of the war. Nine of every ten war refugees are women and children. This means several lurking dangers. Violence against women can remain hidden. Women who have fled the war are in danger of falling into exceptionally brutal situations.

Already in March, alarming signals came from volunteers working with refugees, that there were men in the immediate vicinity of the Ukrainian border who seemed kind enough to offer to transport young Ukrainians to various European countries. The cold eyes of organised crime were hidden behind a mask of kindness. Already before the war, Ukraine was one of the top five European countries from which women were smuggled into sex slavery. Unfortunately, trafficking in human beings has not disappeared; on the contrary, in a time of confusion, organised crime is trying to exploit the situation for its own benefit.

The most brutal manifestation of violence against women is rape. To use rape as a weapon is to commit a war crime. According to Articles 7 and 8 of the Rome Statute of the International Criminal Court (ICC), this is a crime against humanity that, by its very nature, must be regarded as torture. One of the most depressing images of the war in Ukraine is a photograph of half-burnt naked women lying on the road, 20 km from Kyiv. This picture spread as a wildfire in the media at the beginning of April. I agree with Kateryna Cherepakha, President of La Strada Ukraine, who said that “what we know about the rapes is only the tip of the iceberg”. Very thought-provoking was the confession of a young Ukrainian woman during the first months of the war that, when she fled her home, she grabbed condoms and scissors, just in case.

Although rape is one of the most covert crimes, we must believe that these war crimes will not go unpunished. The trial of 32-year-old Russian soldier-rapist Mikhail Romanov, which began on 23 June in Kyiv, is to be welcomed. Of course, Romanov, who was in Russia, did not appear in court, and the hearing took place in absentia. At that time, the Ukrainian Prosecutor’s Office had simultaneously initiated proceedings against 50 cases of rape committed by members of the aggressor’s army. Unfortunately, there are more and more cases of rape by Russian soldiers. The International Criminal Court has started operations in Ukraine. It will take time to identify war crimes, but sooner or later, the trials will begin with all the required severity.

As noted, war refugees are, first and foremost, women and minors. It is impossible to say how many of them have been raped. The rape of women, used as a weapon in Russian warfare, puts many European Union countries in an ethical dilemma when receiving refugees. Poland, which has accepted the largest number of war refugees, has ruled out abortion by law. Hungary and Slovakia exercise similar opposition to abortion. Hundreds of thousands of war refugees have arrived in the countries bordering Ukraine. Is the national ban on abortion truly to be enforced for Ukrainian women who have been raped by Russian soldiers? Even if they are war refugees?

There is another aspect specific to Ukraine, concerning women. One that is quite difficult to resolve. I am not referring to the inadequacy of Ukrainian legislation, where rape and sexual exploitation are not fully defined. I am talking about surrogate motherhood that is legal in Ukraine. Women carrying a foreign child in their womb became a problematic issue already in March. The number of surrogates in Ukraine amounts to almost 2500 a year. This leads to the question of the legal status of children who will soon see the light of day in the middle of a turbulent war. But not only that. How and where would the child be born during the war? How can it be ensured that infants reach their legal parents? Numerous legal and practical questions remained unanswered. In essence, these pregnant women suddenly felt not like free citizens, but like forcefully placed birthing machines. They had to sign a contract, forcing them to give birth in Ukraine. According to international law, however, in a war situation, a person has the right to leave the war zone. While pregnant surrogates already are stressed, Moldova expressed concern that the war in Ukraine would lead to a reduction of surrogate pregnancies in Ukraine, and an increased pressure of surrogacy in poorer Moldova.

What should the European Union do? It should not relieve the pressure on Russia. Alongside the energy and security crisis, we must not forget that the main victims of this war are women. This is also what the European Commissioner for Home Affairs, Ylva Johansson, did in her ten-point practical solutions plan already a month after the outbreak of war. In May, the European Parliament adopted a resolution on the impact of war on women in Ukraine. Member states remain open to refugees, but are increasingly reluctant. The number of war refugees accepted by Poland equals the population of Estonia, while Estonia has given shelter to Ukrainians at a rate per capita which is the fourth highest in the European Union.

However, it must be said loud and clear that violence against women in this terrible war has taken on a terrifying dimension. We have no right to forget this atrocity. We must not forget for a moment that hundreds, if not thousands, of Russian soldiers have used rape as a weapon of war, either individually or in groups. The hope remains that the ICC will do its job with dedication and that war criminals will receive the harsh punishment they deserve.