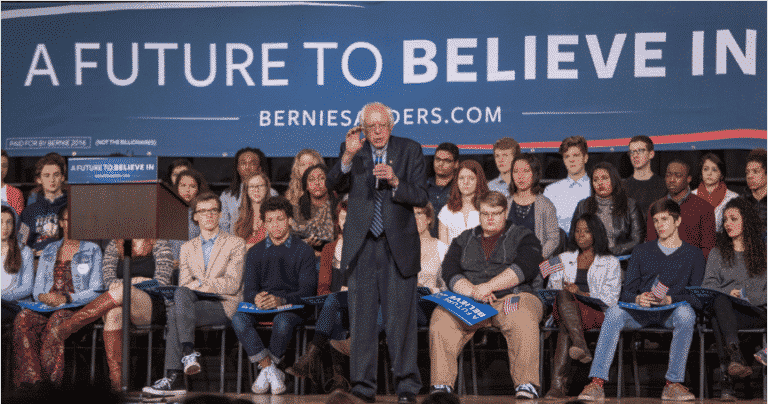 The anti-establishment campaigns of Sanders and Trump certainly share some common elements. Both Sanders and Trump describe a rigged political system that favors wealthy interests over average Americans. They appeal to an electorate that is deeply angry with the direction of the country and fed up with a government that seems incapable of doing anything about it. And they are taking on their party’s elite in a way few could have predicted a year ago.

But there is a crucial difference between these two insurgent candidates. Trump is exposing the disconnect between the Republican party elite and its base of support and is his campaign is like an earthquake shaking the Grand Old Party’s foundation to its core in a way that it might never recover. Republicans are in full blown crisis, with many influential Republicans openly wondering if this is the end of the GOP as a cohesive electoral force in American politics regardless of whether Trump wins the presidency. This meltdown will certainly be analyzed in more detail in future updates.

Sanders, on the other hand, is running a campaign to move his party not destroy it. And in many respects he has succeeded, particularly in forcing Clinton to adopt a more populist economic agenda than she anticipated at the outset of this campaign. Sanders’ campaign has also shown both the potential promise and pitfalls for the future progressive and Democratic coalition that simultaneously seems poised to secure a governing majority and could be at the beginning of a similar trend that has eviscerated the Republican Party.

What is happening to the Republicans, albeit still contained within the Party structure, is similar to the National Front in France, Podemos in Spain, or Syriza in Greece. These movements are not about merely changing the policies of the traditional left or right wing parties in those countries, they are about replacing them with radical programs of the left or right. Though there are important differences, Sanders resembles a nascent Jeremy Corbyn style movement within the British Labour Party. There is still time for Democrats to respond and capitalize on the enthusiasm that Sanders has generated in certain quarters. The same can’t be said for Republicans.

Sanders’ success in the early states up until South Carolina was built on two key factors. First, the Democratic primary electorates have become more liberal in their political outlook over the eight years since the 2008 primaries. The shift was most pronounced in Iowa and New Hampshire seeing double digit increases in the percent of those that voted identifying as very liberal. This trend in the early states has been evident in national polling as well, with now 45% of Democrats identifying as liberal, the largest segment of the party, when in 2000 only 29% of Democrats described themselves that way, then the smallest segment of the party.

Secondly and definitely counter intuitively, the 74-year-old socialist from Vermont has been able to energize and motivate young voters at practically unbelievable numbers relative to Clinton. In Iowa, New Hampshire, and Nevada Sanders won more than 80% of voters under 30. These Millennial voters are part of the largest generation in American history—larger than the fabled post-World War II Baby Boomer generation—and could form a key part of the Democratic coalition for years to come.

Sanders has captured them at least in part because he is speaking to conditions that they feel in their lives. Many are either in college or recent graduates struggling with massive student loan debt and entering a workforce that is only slowly recovering to the level of employment before the financial crisis of 2008-09. In addition, wages have only just started to grow, meaning their higher level of debt is not being offset by more earnings.

Sanders has built his campaign around these and other major problems, blaming a corrupt political system for their persistence, and proposed solutions that match the scale of these challenges. And a more liberal Democratic primary electorate fueled in part by Millennials has enthusiastically supported this policy platform. This could be a moment when forces are aligning to move the country to the left and build a governing coalition to support progressive solutions to America’s challenges.

But the Sanders phenomenon also highlights a real risk for Democrats. The policies he is pushing have no chance of being implemented, and not simply because Republicans currently control both chambers of congress and are likely to maintain control of at least the House of Representatives in 2017. Rather, Sanders’ policies would not be passed even if Democrats were in the majority. We know this because it was only in 2009-10 when Democrats held massive majorities in congress and still failed to enact anything like the policies Sanders now proposes. Another problem is that his policies simply don’t add up and rely on the kind of magic accounting that permeates Republican tax and spending plans.

This is a departure from traditional Democratic approaches to campaigning and policy. It is fair to say that there were great expectations that accompanied President Obama’s campaign for the presidency, but the actual policies that he was running on were orthodox Democratic policies. Sanders’ proposals for much higher taxes, debt free college, and another health care overhaul to implement a single payer system are simply not feasible and resemble the kinds of promises made Republicans that have created unreasonable expectations among conservatives that has contributed to the rise of Trump.

Sanders’ recognizes that his plans do not have majority support and counters that he will start a political revolution in the United States by fighting against endemic corruption that will draw more people into the political process and create a new governing coalition to implement his policies. The only problem is that even though he has achieved great success relative to expectations in this campaign so far, there is no evidence of a political revolution. Turnout is down among Democrats across the first four primary states in 2016 compared to 2008.

Bernie Sanders’ campaign has both been reflective of and driven a changing Democratic Party. This represents an opportunity to capitalize on a moment in American politics when Republicans appear to be collapsing and a new governing coalition could be forming to support genuinely progressive policies to address the country’s major challenges. It also presents a risk. Democrats must recognize that the party can’t become unmoored from the country as a whole, that it must shift the entire political spectrum to the left and build a policy platform that can obtain majority support. Otherwise, Democrats risk going down the same path as Republicans and increasing voters’ anger and frustration at a political system that continues to fail to deliver.