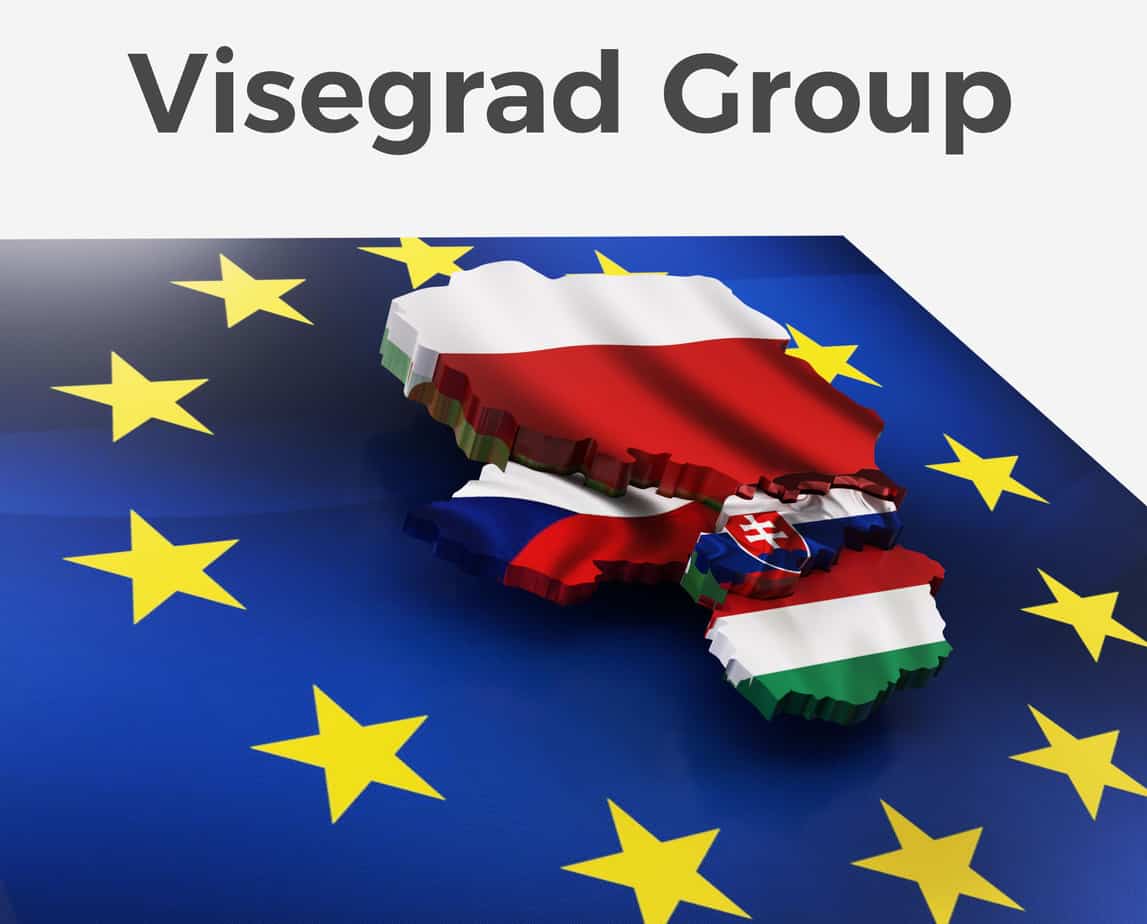 Towards the end of the previous legislative period, the so-called V4 (Visegrád Group) countries came to a peak point of resentment in their relations with the European Union. To be clear, they would not always act together or conspire to arrive at Brussels summits with a consolidated agenda. But nonetheless they frequently found themselves on the opposing side towards all calls of joint actions in crunch moments. The most symbolic was perhaps their refusal to contribute to solving the migration crisis.

The latter was considered an ostentatious lack of solidarity, which was yet another point in a growing negative perception of the V4. It was widely commented as an astonishing manifestation, even more so as not so long ago the populations of Poland, Hungary and Czech-o-Slovakia had been counting on understanding, compassion and support from abroad for the hardship that the life under the previous regimes entailed for them.

But the three decades, which, for the EU may be a short time, is in fact a time span that historians associate with a turnover of one generation and here comes the possibly very difficult question: how is it possible that the citizens of those states where the memory of 1956, 1968 or 1989 is still so vivid could become so oblivious to the importance of the core values on which democracies are built? How did it come to the point where especially Hungary and Poland rose to be the states that have permitted authoritarian regimes to grow?

The answer isn’t as simple as suggests the idea that those are still quite new democracies and going through a challenging period in the beginning is something unfortunate, but quite natural. And that it couldn’t have been anticipated at the beginning of the 1990s, when the new constitutions were drafted against the backdrop of an overwhelming hooray for democracy. Apparently for those reasons, the founding parents of the new republics did not anchor too many measures to prevent a shift to non-democratic regimes in their constitutions. Back then such a scenario was of course unrealistic, whilst twenty years later the lack of such preventive or defensive measures in the Polish Constitution (to give an example) was a reason for which the government of the Law and Justice party did not have too many obstacles in defying for example the position of the Constitutional Tribunal. But that is only one part of the story.

The turning of the tides reflects many more trends. To begin with, one cannot separate the debate on the overall crisis of democracy from the way it resonates in the V4 countries. Yes, it may be amplified in many dimensions, but still it does come down to the fact that so many citizens, both in Europe and beyond sense: that they lost control over their lives and that the political parties stopped representing them. Individually and collectively they revolt, which for a long time showed in the declining turnout, then in protest votes and now it seems to be striking a new set of attitudes, the nature and political translation of which researchers can only be unsure at this stage.

Furthermore, looking at the V4 countries, one cannot help but come to a conclusion that not everything can be explained through the lens of economy. It is true that Hungary was a victim of the economic crisis, and even without looking at the figures, just by taking a stroll in Budapest, one could feel the pain of the capital of the country that until very recently had been booming. Was that the reason to turn to someone who would appear a strong, bold and ‘simple truth’ telling leader? Many have been inclined to say so, but then what was the motivation in Poland, which even the Economist was showing on its cover as the extraordinary example of crisis-proofed prosperous economy? Why was Andrej Babis successful in Czech Republic, where, among other indicators, youth unemployment was decreasing recently to a record level of little above 5%?

This would suggest that the problem does not lay directly in economy – but that it rather is of a societal and social nature. Whilst these countries took the deep breath of the fresh air coming from the West, they are now finding themselves panting as a result of precisely the liberalisation that they so enthusiastically inhaled in the past. This very much deconstructed the idea of a state that would care, protect and provide opportunities – which neither as a sense of security, nor as a framing of living and working conditions in those countries was ever replaced. Most concretely, the entire public policy pillars collapsed, which meant that old shortcomings were amplified and today if you talk to both young and old, Slovak or Czech or anyone else from the region, they are likely to tell you that healthcare, education (including childcare) and pensions is what is a set of illusions back home. Neither do they work, nor is there a perspective they will anytime in the near future – regardless of where the countries are in terms of reaching EU2020 targets.

This quasi laissez-faire approach is not challenged by any of the exponents of the centre-left there so far, for whom, in the context of urgency of other issues and whilst picking up diverse fights, the one in the name of the EU seems not to be the top of the agenda.

In that sense, the European Union with its hard economic policies and soft social ones seem to have been too intangible as a framework to counteract these erosive trends, which evidently fired back. Today the inhabitants of the V4 region demand the rights that the integration entails – such as equal treatment or the freedom of movement of workers which is more and more contested by the West. But benefiting from these does not make them feel Europeans in a sense of taking responsibility. They see Union as burdensome: for those sceptic about it, it interferes too much; and for those who used to be enthusiasts of it, it has done far too little to defend them both politically and standards-wise.

This conclusion is very telling, as it also contradicts the surveys that citizens in those countries are pro-European. In theory, yes – but when it comes to practice the picture is more complex. They want to belong (also for historical reasons) and they would not support separation à la Brexit. But at the same time, they feel disaffiliated with Union in itself and are not that much involved in any of the ongoing debates about its future. They assume it will continue rolling on, and they will have to see how that will end for them in particular. This quasi laissez-faire approach is not challenged by any of the exponents of the centre-left there so far, for whom, in the context of urgency of other issues and whilst picking up diverse fights, the one in the name of the EU seems not to be the top of the agenda.

But then, there also seem to be very little incentive from the other side. The allocation of the top positions of the EU saw among 5 nominees literally none from the states that joined after 2004. Also, there is hardly any V4 representative heading any of the European Parliament’s Committees (at least for these first 2,5 years). The speech of the EP President-elect has had much in content about the rule of law and democracy, but as per more vital direct interests of the V4 countries, it wasn’t exactly a manifesto that one could translate and distribute among their citizens with a hope not even to inspire, but as little as to interest them. So, while there are those big promises about the ‘Future of Europe Conference’, it would seem that the Union is looking at the best trajectory to prepare it, while a part of its members is already simply drifting away from the course.

It seems like a depressive summary that suggests that the V4 countries may have not left the common house of the EU, but have definitely moved to the proverbial attic – pulling the ladder behind them, descending to the common room only for big family gatherings and otherwise remaining reluctant to share but common households responsibilities. At the same time, there are clear expectations that the roof and maintenance of that common house will continue to be sorted out with little trouble, but much benefit for them.

So, is there a chance? One could say, indeed there is. First, one can be hopeful due to the factors that were mentioned here already before. The situation in those countries is of course specific, but it is also an offspring of larger trends. When it comes to democracy bouncing back in many places, there is already a breakthrough like in the last local elections in Hungary or general in Poland, not to mention the way in which the governmental crisis in the Czech Republic was overcome and a number of transformative tendencies in Slovakia.

Secondly, there are a number of big dossiers through which the EU can go beyond traditional limitations of the soft social policies. The recently adopted European Pillar of Social Rights, a set of promises on minimum wages and standards in the package of the Commission, the new Gender Equality Strategy, alongside the possible new Green Deal and the completion of the Digital Union – these all can help restoring the idea that not only economic advancements, but actually social progress is part of the integration. That could help on one side the aggravating public debate on tangible issues, on the other it could become a bridge for rapprochement with the citizens. In any other case, they are bound to fall into the trap of Kaczynski or Orban that promise entitlements in the shape of direct transfers aiming not that much at progress or opportunities, but rather at creating false sentiment of being appreciated and treated with dignity.

Finally, it is high time to go beyond the sentiment of “Eastern discomfort”. Yes, the initially quoted migration debate (alongside many others) hase created a feeling of a separatist approach from Warsaw, Budapest, Prague and Bratislava. But for better or for worse, all EU Member States are “in this” together. So, whilst the EU should continue relentlessly in defending the core values, its actors should seek to invest energy beyond the unilateral time out kind of approach. There are many entries that could be tried – starting from European political families that could intensify their actions through members on the ground – and finishing with more engaged support for civil society. The EU cannot solve the internal problems of those countries, as also it should not wait that one day they just arrive, saying ‘a new days has come, the troubles are over’. But the longer the informal cordon sanitaire exist, the harder it will be to build bridges – that already now are desperately needed to reach beyond the apparent political and social divides.