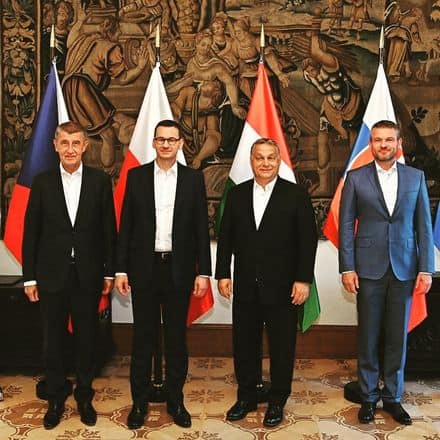 by Petr Pospíchal
Member of Charter 77

Overcoming the anti-European ideology of “visegradism”, which is currently present in Central Europe will not be easy, but it is crucial to at least try.

“We know what we are doing and we basically won yesterday. We blocked it.”  These were the words that the Czech Prime Minister Andrej Babiš uttered after the second day of the European Council summit, where European leaders rejected the nomination of Frans Timmermans for the job of the President of the Commission. It is worth mentioning that Frans Timmermans is a representative of the Social Democrats, a party that Andrej Babiš in in a government coalition with.

And this is the tune that the countries of the Visegrad group have been singing for years. The elites present, with great delight, their political failures as great victories, their incapability of understanding the challenges and problems of today as proud sticking to their principles, and their embedded and limited view of the world as protecting the interests of their citizens.

The personal and political résumé of Frans Timmermans is bullet-proof, just as his firm grounding in the traditions of the modern left-wing European humanism. He understands our region very well, maybe so well that some dismiss him for exactly this reason. It is his Europeanism and his commitment to the ideas of European humanism and rule of law that bothers the current leaders of the Czech Republic, Poland, and Hungary.

His long-lasting contribution to building a solidary Europe bothers them. His upholding of the necessary, fair and functionally well thought-out principle of refugee quotas, which would relieve the burden of the Southern coastal states bothers them. His enforcing of the principles of the rule of law including the respective proceedings against Hungary and Poland bothers them. His perennial personal commitment has caused the Central-European representatives to not like him – despite his unquestionable democratic mandate.

It is his Europeanism and his commitment to the ideas of European humanism and rule of law that bothers the current leaders of the Czech Republic, Poland, and Hungary.

Thus, the Visegrad Prime Ministers Babiš, Mateusz Morawiecki, and Viktor Orbán made the leaders of the stronger European countries look for a compromise. Such a compromise was found in the person of Ursula von der Leyden but behind-the-scenes. And it is less democratic, less trustworthy and could seriously damage the EU in the long-term. It is sad that the then Italian government and part of the Slovak government supported this move, but given the current political turmoil in Europe this cannot be considered surprising.

The question of the democratic deficit that the rejection of Frans Timmermans’ nomination raises is not only linked to this event but can be seen throughout the modern history of Central and Eastern European states regularly. For example, the idea that the voter should go and vote once in a while and not worry his pretty little head about anything can be seen throughout the political garniture since the beginning of the 90s till today. Whether the recent courageous activity of the civil society against the oligarch government of Andrej Babiš will serve as turning point remains to be seen.

In addition, the newer EU Member States including the V4 managed to negotiate exactly zero major positions for themselves during the new European election period. This could have a serious impact, for example on the new European budget or on the form of the subsidy programs. Hopefully, the European Commission will not allow the citizens of these countries to be significantly harmed.

If the Czech society (and let’s hope that with time the Polish and Hungarian as well) finds a way to overcome the will of visegradism, it will find a good ally in the main torrent of the European Union.

Egocentrism – that is the fundamental approach of politicians such as Babiš, Orbán, and Kaczynski. Solidarity among Member States, seeking agreement and proposing positive solutions are beyond their realm of understanding. Where they cannot control, they whine, complain and protest. They are bad at negotiating and thus have to pass severe defeats off as gleaming victories.

They do not care for the interest of the entire unit, not even in their own countries, let alone in the European Union. They are stubborn and therefore incapable of connecting diverging interests. That is why they prefer force-solutions. Their mental realm is poor because it stems out of old fears, prejudices, and national traumas. They do not pay attention to the outside world because they cannot dominate it. They only care about their own pragmatically sought out goals, and thus take the EU only as a book-keeping unit – or as a cash machine. For them, politics is just a fight for money.

If the Czech society (and let’s hope that with time the Polish and Hungarian as well) finds a way to overcome the will of visegradism, it will find a good ally in the main torrent of the European Union. This, however, won’t happen by itself and it won’t happen without us. And most importantly, it won’t happen without the fight for the fundamental values of the European humanist tradition. The traditions of solidarity and a socially sensitive society will have to come together with environmental responsibility and with the receptivity to the historical challenges of today. Anything smaller might not be enough.

This is a translated and edited version of an article originally published by Deník Referendum : http://denikreferendum.cz/clanek/29833-visegradismus-to-je-sobectvi-jako-politicky-program