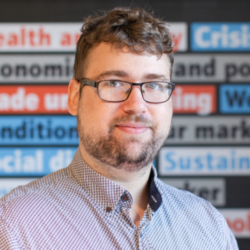 Wage inequality is on the rise, pushed by technological change, globalisation and trade, and institutional deregulation. It is a problem of fairness. But inequality itself also has negative effects on the economy as a whole. Increasingly, this inequality can be traced back to companies and pay setting. Companies increasingly differ in their productivity and revenue. The rise of superstar firms contributes to these rising differences and increasingly decouples economic growth from workers’ welfare and wages.

The total compensation package workers receive – including bonuses as well as non-wage benefits – is even more unequally divided than wages. These hidden components of wages mainly benefit the higher earners: in the EU about 8-10 per cent of the total earnings by top earners was in the form of bonuses, compared to 4 per cent for median workers. These bonuses are hardly paid at all at the lower end of the wage distribution, and they are substantially higher at the top. Over time this results in an increasingly skewed and unequal distribution.

An increasingly important part of these bonuses consists in ‘performance pay’ – where wages are tied to some measure of the worker’s own performance (for example sales or production targets), performance of her or his team, or to the performance of the company as a whole (through shares, or when meeting targets for example). In the early 2000s this was still relatively rare as only around a fifth of workers received such a bonus. Since then, however, this has increased to up to a third of all employees since then. The share of workers receiving company bonuses doubled. By comparing pay setting in countries and sectors over time, performance pay really has boomed. This has happened mainly through, on the one hand, greater use of new technologies and involvement in trade and global value chains, which can increase competition for good workers and the benefits of incentivising them, but also, on the other hand, a decline in worker representation through dropping trade union power and collective bargaining coverage.

Wages are much more likely to depend directly on firm performance in sectors with high involvement in trade, and continually high investments in new technologies. It can be 10-20 per cent higher in these sectors than in the less technologically advanced ones, or in those which are less involved in trade networks. These economic drivers have played an important role in sectors such as ICT, or financial intermediation, but also in manufacturing. Company profit sharing is especially heavily used in these sectors, further driving inequality. In the financial sector, these bonuses are increasingly facing scrutiny.

Why should we care about how people are paid?

It matters because workers who receive performance pay earn on average more than their colleagues on fixed pay. This difference is especially high for the higher earners. These bonuses tend to go to those who already earn more – mainly men with higher degrees, doing managerial or professional work. For instance, receiving bonuses based on the company performance or shares only increased for the 25 per cent of highest earners, and not so much for anyone else. The overall variation in wages across Europe is estimated to be 6 per cent lower without performance pay. Crucially, inequality linked to performance pay reinforces existing structural gaps in the workforce and contributes to the gender pay gap, and inequalities suffered by migrants. This is one channel through which workers increasingly differ from each other, depending on the company they find work for, and through which inequalities increase.

Crucially, this inequality is not a necessary price to pay for greater efficiency and productivity of workers. There are countries and sectors where the use of performance pay does not lead to higher wage inequalities and where the benefits are more equally shared. The key lies in the presence of institutions and worker representation. In workplaces and sectors with stronger unions and more collective bargaining, performance bonuses are still used, but the wage gains are distributed more equally over the entire wage distribution.

The result is that there is a much lower increase in wage inequality – or even none. Rising inequality is not set in stone: through collective agreements and a more equal bargaining position between employers and employees, this inequality can be substantially reduced. Governments can play a role here too, through incentivising or supporting the sharing of profits with workers.